Gayle King Reverses Course on Defending Rose: ‘Let the Chips Fall Where They May’

Perhaps feeling the heat over her kind words for accused sexual abuser Charlie Rose, CBS This Morning co-host Gayle King backtracked on Friday and said of the investigation: “Let the chips fall where they may.” On Thursday, King declared she was “sick” of covering the sex allegations against her “friend” and former colleague.

On Friday, This Morning covered the damning Washington Post investigation that finds three separate occasions when CBS management was warned about Rose’s groping, lewd remarks and harassment. King reacted differently than she did on Thursday, insisting: “But the good news is, if you can say good news, the company is investigating, hired somebody from the outside. I really do feel let the chips fall where they may.”

She assured viewers: “The investigation is continuing. And we take it very seriously.” In contrast, King seemed irritated on Thursday at having to continue to cover the allegations, whining: “I don't know what to say about this.... I don't know what more we can do to Charlie Rose except a public flogging. He's gone.... I’m sick of handling it.” 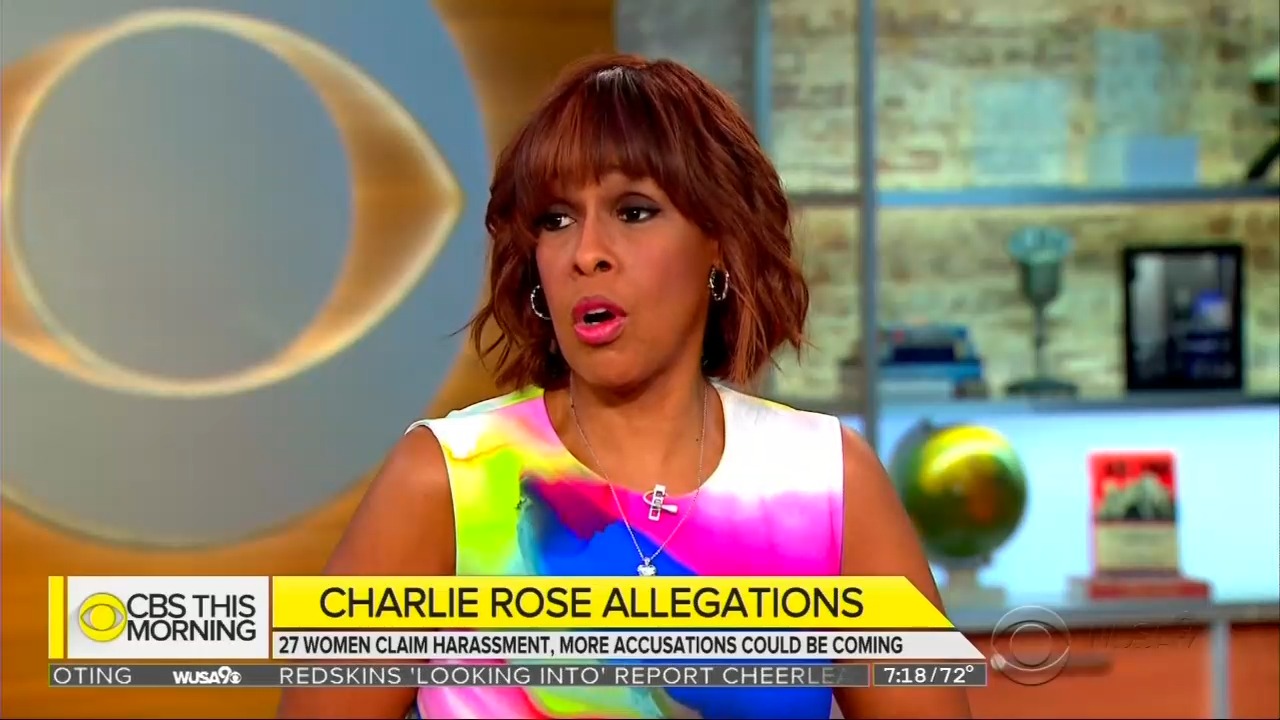 King also stood by the man accused of repeatedly exposing himself to women:

When the story first broke, I said Charlie was my friend. I still consider him a friend. I know that's probably not the politically correct thing to say at this moment. But I don't believe in abandoning people when they're down.

On Friday, CBS correspondent Anna Werner explained one of the examples where management was told about Rose. It involved Chris Licht, who is now the executive producer of liberal comedian Stephen Colbert’s CBS show: 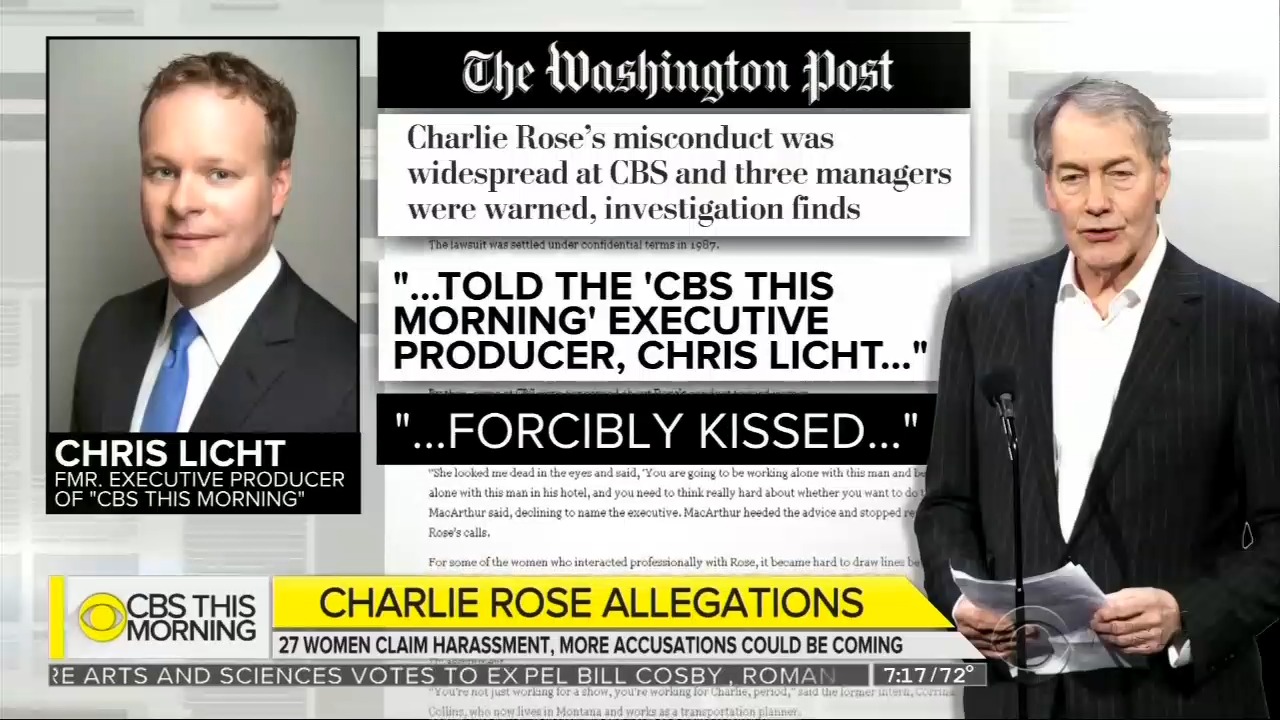 In the days leading up to the 2012 launch of CBS This Morning an employee told then executive producer Chris Licht Rose forceably kissed her. CBS Says Licht spoke with Rose and abided by the producer’s request not to tell human resources. A CBS spokesman says that was within the scope of CBS policy at the time. Licht went on to lead the Late Show With Stephen Colbert.

Colbert is a staunch critic of Donald Trump and his treatment of women. Yet he employs someone like Licht? The involvement of Licht and others in possibly downplaying or ignoring Rose’s actions deserves additional investigation. Fortunately, The Post is doing just that. 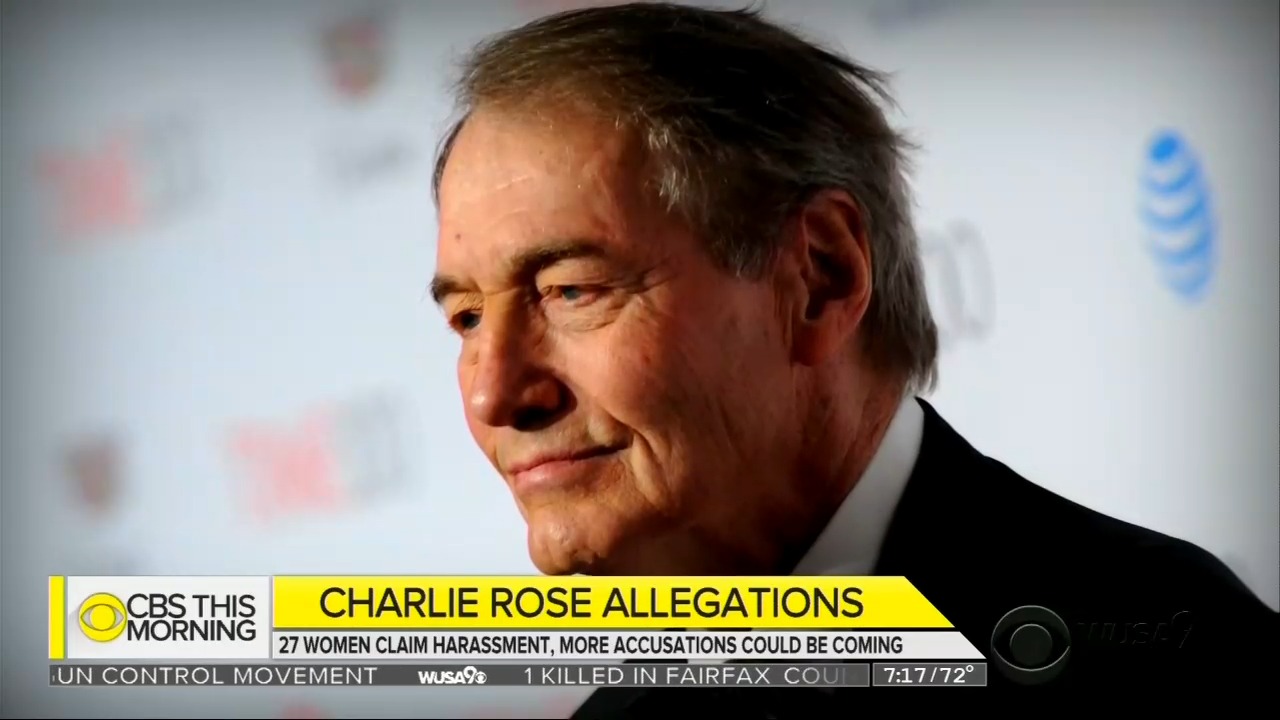 BIANNA GOLODRYGA: The Washington Post is signaling there may be more revelations about what CBS News about claims of inappropriate conduct by former anchor Charlie Rose. In a story published yesterday, the Post detailed three occasions during which it says CBS managers were warned of Rose's conduct. The newspaper spoke to 27 women who claimed Rose sexually harassed them, including 14 here at CBS. One of the Post reporters then tweeted, “it's not over yet. Anna Werner is following this story. Anna, good morning.

ANNA WERNER: Good morning. The CBS news says it cannot corroborate or confirm many of the incidents described in the Post report. It had never received complaints about Rose before his firing last November, but Rose’s conduct allegedly spanned decades.

AMY BRITTAIN (Washington Post reporter): His behavior in some ways remained remarkably consistent over the years as to how he would act toward women in the workplace.

WERNER: Many of whom allege a pattern of inappropriate behavior by Charlie Rose.

WERNER: The paper reports CBS management was told about Rose’s conduct on three different  occasions dating back to 1987 when he made lewd comments to a staffer on The CBS Morning News.

ROSE: Welcome to the debut of the CBS This Morning.

WERNER: In the days leading up to the 2012 launch of CBS This Morning an employee told then executive producer Chris Licht Rose forceably kissed her. CBS Says Licht spoke with Rose and abided by the producer’s request not to tell human resources. A CBS spokesman says that was within the scope of CBS policy at the time. Licht went on to lead the Late Show With Stephen Colbert as Ryan Kadro assumed the role of executive producer of CBS This Morning. The Post reports Kadro’s former assistant warned him last year that Rose was treating another employee to what she considered unusual lunches at expensive restaurants while Rose floated other job opportunities to her. According to a CBS spokesperson, Kadro determined it was for a job interview. He said his former assistant did not tell him about inappropriate behavior.

DAVID RHODES: There was not knowledge of these events.

WERNER: CBS News President David Rhodes has insisted the network never protected Charlie rose. In a note to employees he revealed the company has retained an outside law firm to help investigate sexual misconduct and complaints. Britain said her inbox is filling with potential new leads.

BRITTAIN: We're looking at the information that is coming in and we're vetting it and we're continuing our reporting.

WERNER: Charlie Rose has not responded to a CBS News for comment but told the Post, “your story is unfair and inaccurate.” Through an attorney three women told the Post they plan to file a new lawsuit in the coming days.

GAYLE KING: All right, Anna. Thank you. Listen, the more you here about this story, the more awkward and uncomfortable it is. But the good news is, if you can say good news, the company is investigating, hired somebody from the outside. I really do feel let the chips fall where they may. The investigation is continuing. And we take it very seriously.

JOHN DICKERSON: As a son of somebody who worked in the news business in the '50s and '60s, I think about the women who had to come forward, the anguish they had to live through, the courage it took to come forward and the frustration of having to be silent and feel like you can’t have a voice. So it’s good they can get some kind of relief through this investigation. I also think about the other damage in this, all those people who work here those long nights.

DICKERSON: Who fling themselves across the country to go cover stories who are apart of this now. And dealing with it as well