CBS journalists, who have previously downplayed the problem of illegal immigration, on Thursday chose the sympathetic story of DACA medical school student Dreamers. The on-screen graphic for the This Morning segment read, “Dream in Jeopardy.” Co-host Norah O’Donnell introduced reporter Adrianna Diaz as “outside of Chicago where a group of future doctors is watching the DACA debate very nervously.”

Diaz explained, “After almost 20 years living in the United States Cesar Monelongo still worries immigration agents could detain him at any point. Born in Mexico but raised in New Mexico the 28-year-old is the first undocumented immigrant to pursue his PhD and MD at Loyola University Medical School.”

It wasn’t until near the end of the segment that Diaz got around to mentioning: “Critics called it an unlawful program that lacked congressional approval, promotes illegal immigration and takes away jobs.”

On September 5 2017, 99 percent of the coverage of Donald Trump’s decision to put Congress in charge of DACA was negative. In December, the CBS Evening News ignored a California jury’s shocking decision to acquit the illegal immigrant who killed Kate Steinle. 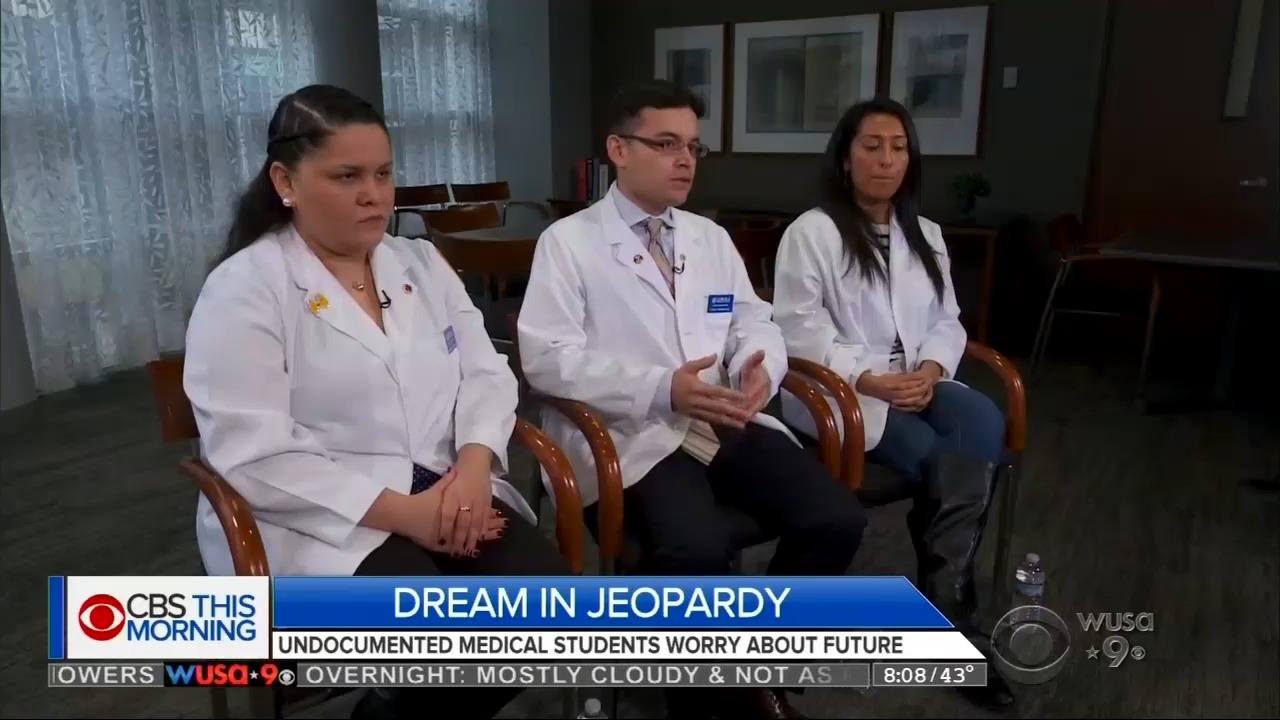 NORAH O’DONNELL: Nearly 700,000 immigrants are protected by DACA and many are training for high-level professional careers. Adriana Diaz is at Loyola University's Stritch School in Maywood, Illinois, outside of Chicago where a group of future doctors is watching the DACA debate very nervously. Adriana, good morning.

ADRIANNA DIAZ: Good morning. This medical school was the first to officially accept undocumented students back in 2014. There are currently 32 being trained here. Now, because of DACA, they can study and work here, but they don't get citizenship. We sat down with three students who told us what it's like to be at the top of their academic game with no clear future in sight.

CESAR MONTELONGO: Every time I hear footsteps outside of my door, like, there's a part of me that for a second I think should I open the door?

DIAZ: After almost 20 years living in the United States Cesar Monelongo still worries immigration agents could detain him at any point. Born in Mexico but raised in New Mexico the 28-year-old is the first undocumented immigrant to pursue his phD and MD at Loyola University Medical School. But the soon-to-be doctor may never be able to practice legally.

DIAZ: Twenty-seven-year-old Alejandra Duran Arreola studied chemistry in college in Savannah before becoming one of the Dreamers enrolled there.

ALEJANDRA DURAN ARREOLA: The news reminds you, Twitter reminds you, that at some level you are not welcomed here.

BELSY GARCIA MANRIQUE: I see the U.S. As my home, my community, my people, my peers.

DIAZ: Belsy Garcia Manrique brought her into the U.S. illegally from Guatemala when she was seven, traveling for two weeks by foot and car.

MANRIQUE: I feel like I haven't done anything wrong. I've gone to school, I've gotten good grades. I did community service, and yet that gives me no right in a sense.

BARACK OBAMA: We have always drawn strength from being a nation of immigrants.

DIAZ: President Obama enacted DACA as an executive order in 2012 to protect undocumented immigrants who came here as children. Critics called it an unlawful program that lacked congressional approval, promotes illegal immigration and takes away jobs. What do you say to folks who say this is a country who has to have its borders, it has to have its laws, am people have to have those laws.

MONTELONGO: If you have someone enter illegally but it was 20 or 30 years ago and if they're a productive member of your community, they're paying taxes, what is the logic of deporting them outside of just following an arbitrary rule?

DIAZ: The President has said he wants to find a solution for DACA. Do you believe him?

DIAZ: Although the prospect of deportation is real, Alejandra says she will not go back to Mexico.

ARREOLOA: If I had to go, I wouldn't go to Mexico. I would go to Europe or to Canada or any other country that wants doctors. It's actually funny how we want to stay here, it's because our families are here, our communities are here. But at the end of the day we're American-trained almost physicians. Any other country would jump up to take any of us.

DIAZ: If lawmakers find no solution for DACA, there's no clear path for these students to complete their training, repay their loans, or practice medicine. John?