Liberal journalists on the three networks, Wednesday, dutifully did the bidding of Democratic senators trying to take down Neil Gorsuch. ABC, CBS and NBC all promoted the partisan effort to “keep [Gorsuch] on the griddle” and force the nominee to prove he’s “not a political pawn.”

On NBC’s Today, Kristen Welker insisted that “key to [Gorsuch's] confirmation may be his ability to distance himself from President Trump.” In a later segment, Hallie Jackson parroted the efforts by liberal senators: “Judge Neil Gorsuch set to answer more questions from senators today, working to prove he's not a political pawn.”

Over on ABC’s Good Morning America, Terry Moran regurgitated these liberal themes: “Democrats are going to keep up that grilling, keep him on the griddle.... They're trying to portray him as too friendly to corporations, too tangled up in partisan Republican politics.” 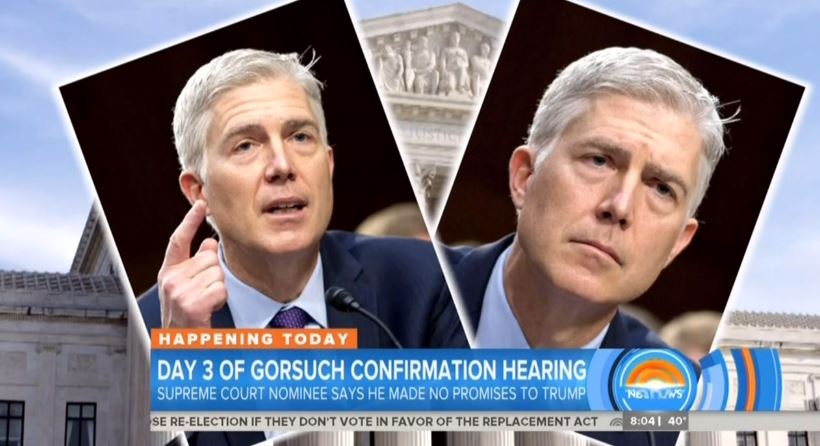 JAN CRAWFORD: Senate Democrats repeatedly challenged Judge Gorsuch on the policies of the man who nominated him. 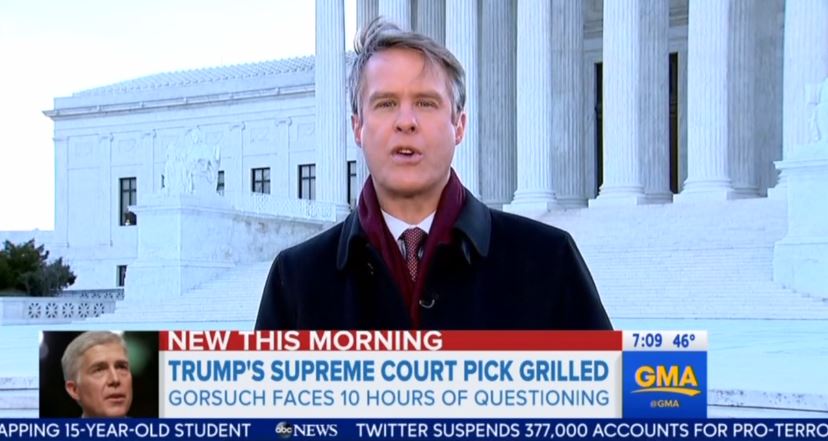 SENATOR DIANNE FEINSTEIN: President Trump and others have said you are the next Scalia.

SENATOR MAZIE HIRONO: What is your view of President Trump's comments on judges?

She did allow that “on the first day of questioning, Judge Gorsuch really held his own with the senators."

Partial transcripts are below:

HALLIE JACKSON: As the president makes his pitch, so is his pick for Supreme Court nominee. Judge Neil Gorsuch set to answer more questions from senators today, working to prove he's not a political pawn.

NEIL GORSUCH: I am a judge. I am my own man.

JACKSON: Gorsuch, telling Congress he made no promises to President Trump about how he might rule.

SEN. LINDSEY GRAHAM [R-SC]: In that interview, did he ever ask you to overrule Roe v. Wade.

GRAHAM: What would he have done if he had asked?

GORSUCH: Senator, I would have walked out the door.

JACKSON: And on President Trump’s attacks against the judiciary?

GORSUCH: When anyone criticizes the honesty or integrity, the motives of a federal judge, well, I find that disheartening. I find that demoralizing. Because I know the truth.

SEN. RICHARD BLUMENTHAL [D-CT]: Anyone including, the President of the United States?

GORSUCH: Anyone is anyone.

JACKSON: But that, by the way, does not appear to be fazing the President. At a dinner last night he said, “Someone said I should not criticize judges,” immediately adding, “Okay, I'll criticize judges.”

ROBIN ROBERTS: President Trump’s Supreme Court nominee also facing a battle on Capitol Hill. Democrats grilling Judge Neil Gorsuch for ten hours on Tuesday in a high-stakes hearing. ABC's Terry Moran is at the Supreme Court and joins us now with the latest on that. Good morning, Terry.

TERRY MORAN: Good morning, Robin. Day two, Democrats are going to keep up that grilling, keep him on the griddle, Judge Gorsuch. They’re trying to portray him as too friendly to corporations, too tangled up in partisan Republican politics, too beholden to President Trump. But again, again Judge Gorsuch very calmly, very firmly says, “I'm my own man.”

After a second day of tense testimony, Supreme Court nominee Judge Neil Gorsuch standing firm that he’s the man for the job.

NEIL GORSUCH: I’m a fair judge. I can't guarantee you more than that, but I can promise you absolutely nothing less.

SEN. PATRICK LEAHY [D-VT]: Is a president's national security determinations, are those reviewable by the Court?

GORSUCH: Senator, no man is above the law.