ABC and NBC on Monday night and Tuesday morning ignored what is being described as a “big setback” for ObamaCare, completely skipping the fact that insurance giant Aetna will reduce by two thirds its involvement in the President’s health care plan. This absence is despite a combined six hours of air time over the two days.

Only CBS This Morning bothered to cover the story. Co-host Charlie Rose explained, “Aetna's decision is a big setback for the President's health care law. Aetna says it will only sell 2,017 health insurance plans through the Affordable Care Act in four states.” Correspondent Jan Crawford revealed that Aetna “just did the math and it was too much of a financial hit.”

She added that “the company reports more than $430 million in losses with individual policy units since the exchange has opened in January of 2014.” As many have been predicted, consumers “in some areas will have only one or two insurers to pick from.” 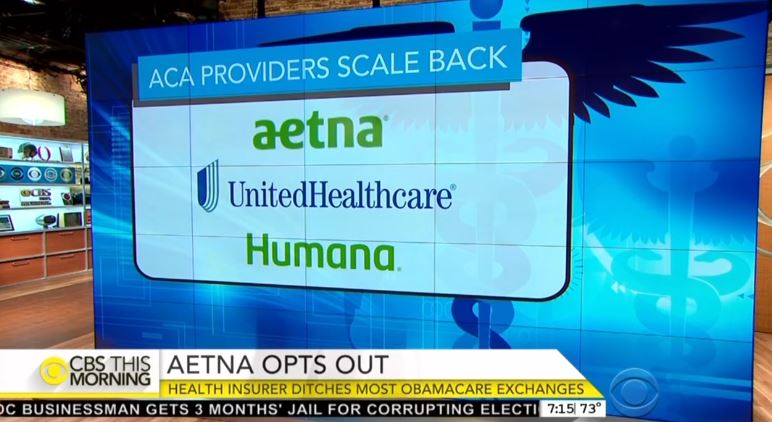 The networks have been largely silent on this ongoing problem. The Washington Examiner on Tuesday explained:

In July, Humana said it would leave the Obamacare exchanges in four states, after saying it's losing money on the individual market. The insurer said it would offer plans in just 156 counties in 11 states next year, down from the 1,351 counties it was in this year.

Again, Only CBS This Morning noticed that development. Norah O’Donnell mentioned it on August 3.

A transcript of the August 16 segment is below: 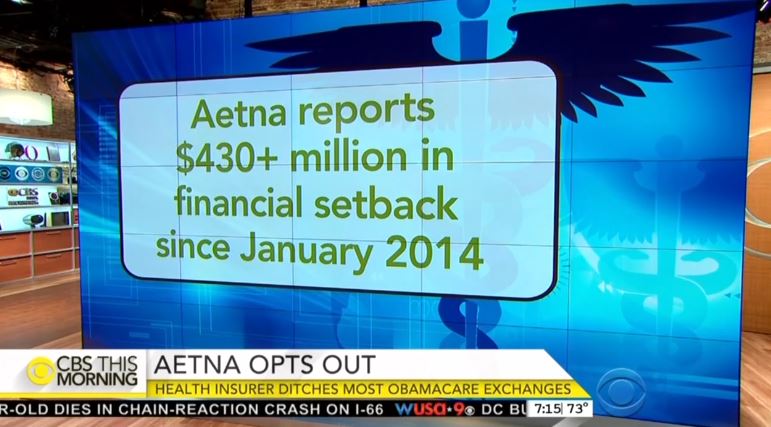 CHARLIE ROSE: One of America’s  largest insurance companies is scaling back its involvement in ObamaCare. Aetna’s decision is a big setback for the President's health care law. Aetna says it will only sell 2,017 health insurance plans through the Affordable Care Act in four states. Jan Crawford looks at the latest insurer saying it cannot afford ObamaCare. Jan, good morning.

JAN CRAWFORD: Well, good morning. So, the 2010 law requires that most people get health coverage and its exchanges are its centerpiece, coverage more than 11 million Americans. More than 900,000 of those people rely on Aetna's coverage through these plans. And Aetna now says it's going to withdraw from 11 of the 15 states. It is effectively pulling out of nearly 70 percent of the counties where it offers health plans through Affordable Care Act exchanges. Now, Aetna said it just did the math and it was too much of a financial hit.

The company reports more than $430 million in losses to its individual policy units since the exchange has opened in January of 2014. And Aetna, it is just the latest of the major national health insurers to announce a pull back. United Healthcare and Humana already announced major cuts. Now, Aetna's chairman and CEO says the vast majority of payers have experienced continued financial stress. But he adds the company “may expand our footprint in the future should there be meaningful exchange-related policy improvements.” But, you know, for consumers, the big change is choice. Because when open enrollment starts, people who rely on this kind of health care coverage in some areas will only have one or two insurers to pick from. Gayle.

GAYLE KING: All right. That’s a big change. Thank you very much, Jan.