The journalists at CBS This Morning on Thursday hailed Barack Obama as the “feminist-in-chief” and praised his new essay in Glamour magazine on “women and politics.” Naturally, Democratic donor and co-host Gayle King expanded the discussion to a complaint about people disliking Hillary Clinton.

Talking to editor-in-chief Cindi Leive and insisted, “ In Glamour magazine, you've been talking a lot about politics. I want to switch to Hillary Clinton and about likability. Because don't you find it interesting that this is still an issue for her today? ” Leive scolded, “They [the public] can accept voting for somebody they think is competent but not necessarily like likable. They are tougher on women.”

Co-host Norah O’Donnell used the interview to call on Donald Trump to become even more liberal when it comes to spending policies: 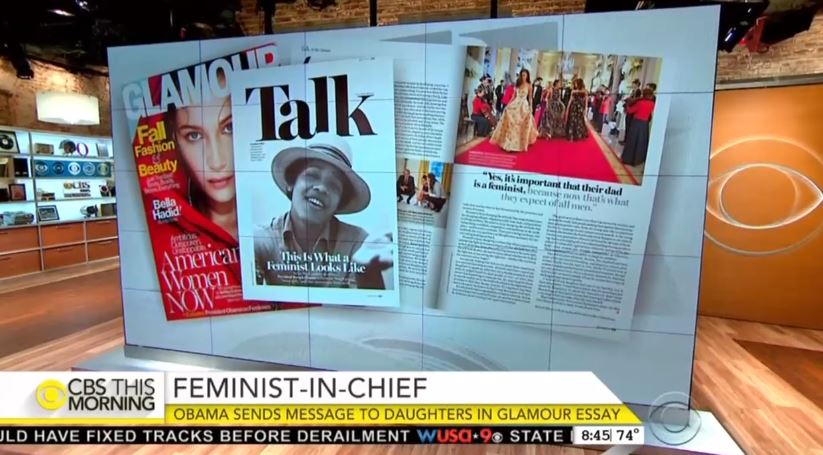 O'DONNELL: Ivanka Trump said at the Republican convention that her father would fight for equal pay and equal work and making child care accessible. You spoke with Chelsea Clinton. We were there at an event at the Democratic convention she seemed to wort of say, "Well, Ivanka, I haven't seen that anywhere on her dad's website."

Back in May, the same co-hosts grilled Ivanka Trump about her dad’s attitude towards women. It’s hard to imagine them doing the same to Chelsea Clinton over her father’s sexual misconduct of women.

A transcript of the segment, which aired on August 4, is below: 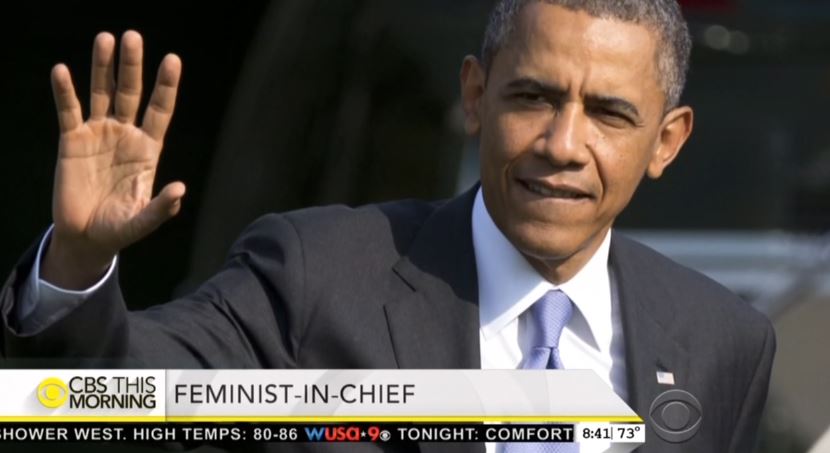 NORAH O’DONNELL: President Obama still has more than five months left in office, but he is already looking ahead to the future, especially for his daughters Malia and Sasha. The President wrote an essay for the September issue of Glamour magazine titled "This is what a feminist looks like." First on CBS This Morning, we are getting a preview. He writes, quote, “It's important for them to see role models out in the world and, yes, it's important that their dad is a feminist because now that is what they expect of all men.” Cindi Leive is editor-in-chief of Glamour magazine. Cindy, good morning.

O’DONNELL: So, is this first time we have heard the president identify himself as a feminist?

LEIVE: Well, he did it. The first time I heard it was at a speech he gave in June at the United States of women summit at the White House that was held there. It did strike me as this very modern moment, something we wouldn't have heard, probably from any other president, but, honestly, we would not have heard before this year. Because I do think of the embrace of the term feminism by men, as well as women, is really been on the rise.

GAYLE KING: I would like to know who edits the president when he submits. He says “This is good but I think you need to change this.”

LEIVE: Yeah. “We are going to have to sit down and talk about paragraph three.”

KING: Did you reach out to him and say would you do something?

LEIVE: So, we started a conversation and said, you know, would you explore this in a bigger way and really talk about why you think it's important for men, as well as women, to embrace the term and also the idea, the principles?

KING: I love this part he said, “We need to keep changing the attitude that value is being competent and competitive and ambitious in the workplace. Unless you're a woman. Then you're being too bossy and suddenly the very qualities you think were necessary for success ends up holding you back.”

LEIVE: Yeah. You know what is interesting? He really brought to this piece a lot of the very nuanced to observations that women have about how we live our lives and the issues that we face in the workplace like the bit that you just read. I mean, this goes beyond the kind of boilerplate “I believe in strong women” that at this point, anybody can mouth pretty effectively.

LEIVE: It's true. I will note in that same study, I believe 70 percent believe they thought feminism was empowering. The angry view is in the minority. But I do think, you know, that was a very long-held belief about feminism, that if you called yourself that you were anti-men, you were anti-family, you were, quote/unquote, feminazi. If you you believe a quality between the sexes that you were somehow against men.

ROSE: What does feminism mean more that the empowerment and the equality of women?

LEIVE: I think it's really about equality. I think it is as simple as that. I think it's not a complicated philosophy. I mean, of course, it's probably different for everybody but that’s how I would define it.

O’DONNELL: It is striking too. I think it’s almost like our last four presidents all have daughters, if not more. I'm just going off the top of my head. They’ve all had daughters and it's shaped their thinking and Obama speaks about this in this essay.

LEIVE: Absolutely. I mean, he’s says, first of all, it's important that he is open about these issues because that is what they are going to expect of all men. But he talks about how he has seen his daughters run into obstacles. You know, people judging them for how they look for how they behave and he has clearly paid attention to what the young women in his office go through and that idea it's harder for a woman to negotiate for herself on the job on the job sometimes and she will be seen at calculating where a man doesn't run into the double standards and he is paying attention.

KING: He talks about the most important women — most important people in his life have been women, his mom and his grandmother. And you —  In Glamour magazine, you've been talking a lot about politics. I want to switch to Hillary Clinton and about likability. Because don't you find it interesting that this is still an issue for her today?

LEIVE: Yeah. I mean, maybe this is maybe the one week she actually doesn't have to worry about that because she is running against somebody telling a crying baby to leave the room. So maybe her likability is not really the issue right now. But it is interesting, Gayle, if you look at studies, they show that people demand more likability of their female candidates than their male. That they don't necessarily —

KING: It doesn't matter if you like the men?

LEIVE: Despite all of that stuff we used to hear how George Bush was the guy everybody wanted to go have a beer with. And not to say it's not important at all but it's not as important in how people see male candidates. They can accept voting for somebody they think is competent but not necessarily like likable. They are tougher on women.

O’DONNELL: Ivanka Trump said at the Republican convention that her father would fight for equal pay and equal work and making child care accessible. You spoke with Chelsea Clinton. We were there at an event at the Democratic convention she seemed to wort of say, “Well, Ivanka, I haven't seen that anywhere on her dad's website.”

LEIVE: She said she would ask the candidate, well how are you going to do that? I haven't heard you talk about specific policies and those are I think what voters want to hear from any candidate right now.