Maher: Bill Clinton Can ‘F**k Around’ on Hillary and Still ‘Love Her’

The not-married Bill Maher on Thursday closed out his live Democratic convention shows by insisting that Bill Clinton can “fuck around” on his wife and still “love her.” The Real Time host also pleaded for Americans to have a more “European” attitude about such infidelities.

Regarding Hillary Clinton’s reference to difficult times in her marriage, Maher wondered, “Was anybody surprised that in the first minute of the speech, she referenced the blow job? Not directly... but we all knew what she said.” He then ranted, “I gotta say, I always thought that the Clintons had a real marriage, despite what everybody said.”

The HBO host continued, “You know what? Fucking around can live side by side with real love. Bill is a dog and he loves her [Hillary]. Two thoughts in your mind. Europeans can do that.” Maher lectured, “We should be able to, too.”

On Wednesday, Maher offered the pearl of wisdom that Nazi Republicans wanted to put immigrants in “boxcars.” On the July 22 live edition, from the GOP convention, he assailed Republicans as retarded "Nazis."

Partial transcripts of interesting exchanges can be found below: 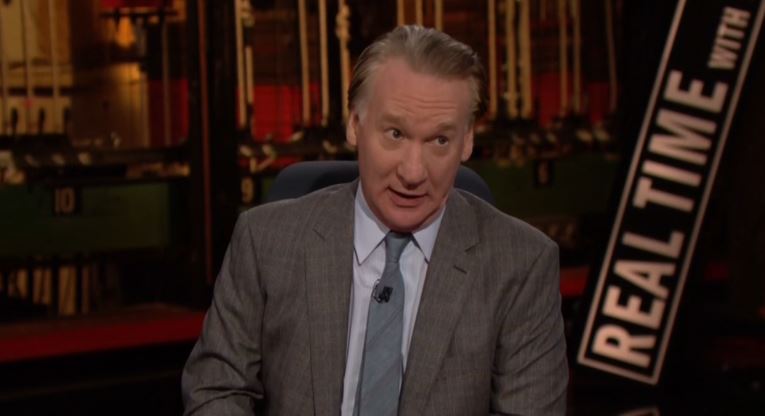 BILL MAHER: First, we had lady Ghostbusters, now this? America is on a roll, ladies and gentlemen. But what a moment for Hillary, right? The first female president we're going to have. And it will change the world. Not to mention what it will do for her speaking fees. [Responding to tepid laughter.] Really? We can't laugh at her a little?

MAHER: I thought that was the best speech she'd ever given. Feisty and didn't shy away from going after Trump and —  my favorite quote, she said, “There is no other Donald Trump. That's a great message.”

SALMAN RUSHDIE: There’s a thing I kind of love about Hillary. It's not fashionable to love Hillary and I understand she's a married lady but just to say, there's a thing that I know a little bit about, which is what it is hike to spend decades of your life being vilified and demonized, you know?

AMY HOLMES: What are you talking about?

RUSHDIE: By, like, another culture's equivalent of Fox News.

MAHER: Yes, the Pakistani Tea Party was not fond of you.

MAHER: Was anybody surprised that in the first minute of the speech, she referenced the blow job? Not directly. No, she didn't say the word but —  come on, we all know what she said. Bill, thanked the delegates, thank my daughter and Bill, We've been through good times and some heart aches too. We all knew —  I was shocked that —

RUSHDIE:  It is good to point to the elephant in the room.

MAHER: I gotta say, I always thought that the Clintons had a real marriage, despite what everybody said. “It's a marriage of convenience. It’s an arranged marriage.” Blah, blah, blah. You know what? Fucking around can live side by side with real love. Bill is a dog and he loves her. Two thoughts in your mind. Europeans can do that. We should be able to, too.”