The journalists at CBS This Morning on Friday were positively wistful as they prepared for Barack Obama’s final appearance at the White House Correspondents Dinner, Saturday night. A network graphic cheered the President “leaving with a laugh.” Gayle King introduced, “They call it the nerd prom. This will be the Obamas's last appearance there as President and First Lady.”

Glossing over the self-importance of the event, King continued, “The event celebrates the accomplishments of the White House press corps. It also gives the President a chance to roast some of the reporters.” Correspondent Margaret Brennan said of Obama:“He's going to try to have the last laugh.”

Brennan included clips of Obama making jokes at past dinners, including this one: “These days the House Republicans actually give John Boehner a harder time than they give me. Which means Orange really is the new black.”

The segment ended with the hosts bubbling over seeing Obama one last time: 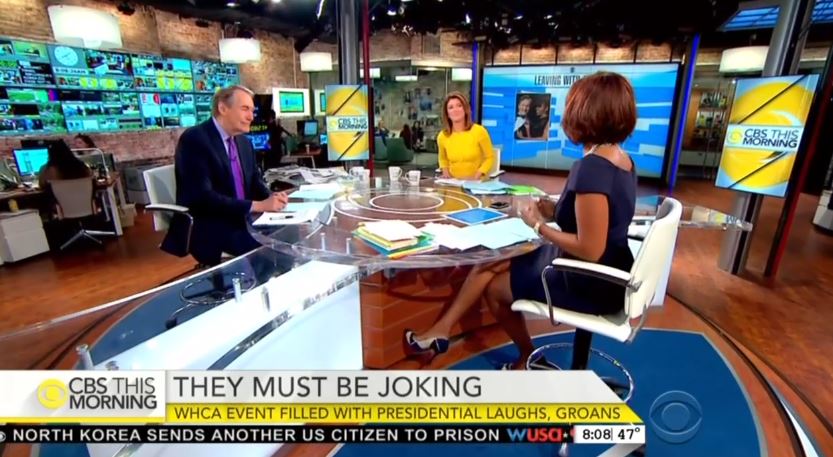 NORAH O'DONNELL: I think it's going to be a great evening.

GAYLE KING: I think so too.

CHARLIE ROSE: The swan song for the President.

The CBS journalists had the White House Correspondents Dinner host Larry Wilmore on earlier in the week. Despite Wilmore’s liberal leanings, they dubbed him a “passionate centrist.” 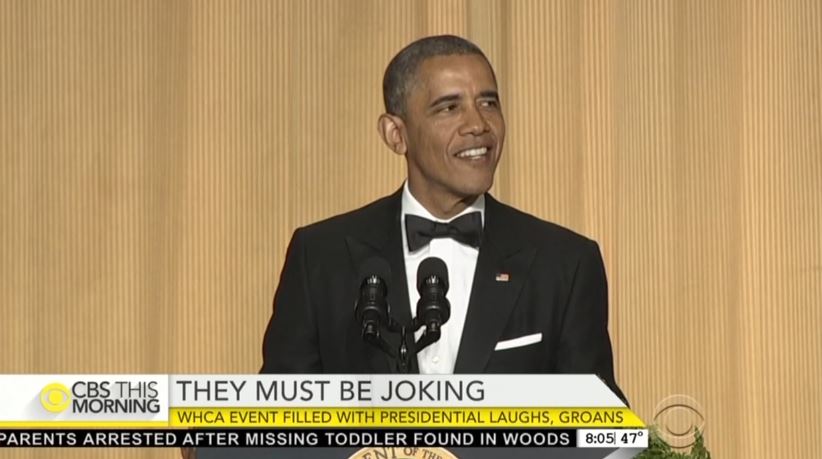 MARGARET BRENNAN: Good morning. This is one of the oddities of American politics. A night when the Commander-in-Chief is required to be a standup comedian. And this will be President Obama's final performance as a sitting president. And he's going to try to have the last laugh. President Obama's jokes range from self-deprecating —

BARACK OBAMA: Tonight I want to speak from the heart. I'm going to speak off the cuff. [Teleprompter appears ]

OBAMA: These days the House Republicans actually give John Boehner a harder time than they give me. Which means Orange really is the new black.

BRENNAN: It’s a night where the President becomes comedian-in-chief.

GEORGE W. BUSH: I believe we’re an America should come together, Republican and Democrat and John McCain.

BILL CLINTON: Over the last few months, I've lost ten pounds. Where did they go?

BRENNAN: The press is a common target.

OBAMA: MSNBC is here. They're a little overwhelmed. They've never seen an audience this big before.

JEFF NUSSBAUM: It's one of the constructive outlets for our political road rage.

BRENNAN: Jeff Nussbaum wrote jokes for many of the president's correspondents dinner speeches and says humor can defuse the sharpest political fights.

OBAMA: Tonight for the first time, I am releasing my official birth video.

BRENNAN: In 2011, President Obama skewered critics like Donald Trump who raised suspicions about his Kenyan ancestry.

OBAMA: Donald Trump is here tonight. No one is prouder to put this birth certificate matter to rest than the Donald. And that's because he can finally get back to focusing on the issues that matter, like did we make the moon landing.

BRENNAN: Do you think the President elevated Donald Trump to his level by spending so much time making fun of him?

NUSSBAUM: Well, humor is such a powerful tool for a lot of reasons. It is absolutely a dagger that you can stick in your opponents.

BRENNAN: And the pressure is on the professional comedians to keep up.

JIMMY KIMMEL: Mr. President, you remember when the country rallied around you in hopes of a better tomorrow? That was hilarious.

AL FRANKEN: Stephen Colbert, I think his goal wasn't to be asked back.

FRANKEN: There’s a little tricky navigating this because there are some people in Washington who live to be offended.

BRENNAN: One certainty, President Obama will have some fun at the expense of those racing to succeed him.

OBAMA: Just a few weeks ago, she was making millions of dollars a year and she’s now living out of a van in Iowa.

BRENNAN: Now, it doesn't appear that Hillary Clinton will be attending this year. Her rival, Bernie Sanders, will go as a guest of CBS. As for the Republicans, neither Ted Cruz nor Donald Trump plan to attend. I think it's a safe bet to say it won't save them from good-natured ribbing.

KING: Yeah. Oh, yeah. Really looking forward to it. We'll see you there tomorrow. That's part of the fun. The President's speech and Larry Wilmore this time being the guest host. See what they do. It's fun as long as it's not targeting you. If it's you, you, than you got to sit there and go hehe.

NORAH O’DONNELL: I think it’s going to be a great evening.

KING: I think so too.

ROSE: The swan song for the President.