The outraged journalists at NBC, ABC and CBS on Wednesday slammed the “controversial,” “beyond insensitive” Ben Carson for his comments about last week’s shooting in Oregon. Their anger provides a strong contrast to controversial statements by Hillary Clinton in recent days.

Carson urged people in a mass shooting situation to attack the gunman, prompting Today co-host Natalie Morales to rage, “It's beyond insensitive. It's hard to hear that.” Co-host Willie Geist huffed, “But my goodness, who would ever second guess people in that situation?” Tamron Hall agreed, saying, “I don’t understand it.” 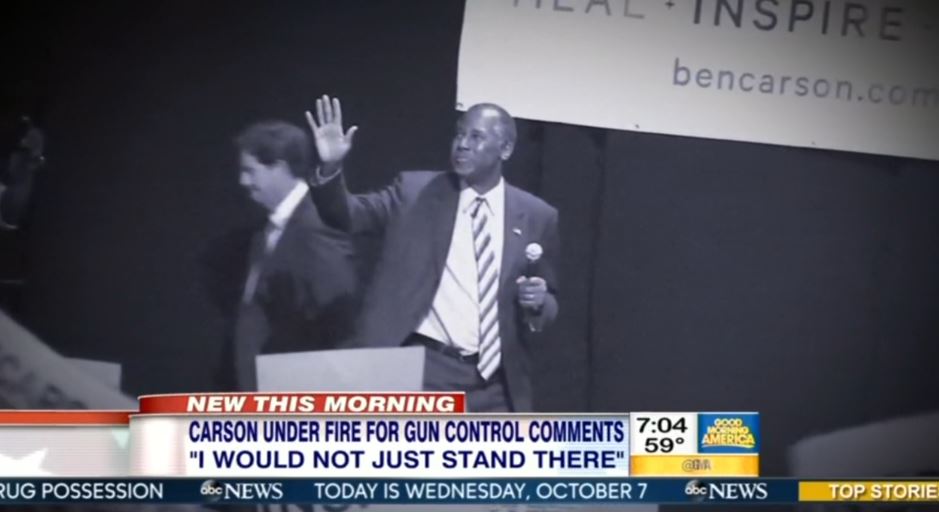 Piling on, Vega also reminded, “Now, this is not the first controversial comment this candidate has made, George. You will remember Carson said he didn't think a Muslim should be president.” An ABC graphic turned a picture of the surgeon black and white, making him seem sinister. (See picture at right.)

On CBS This Morning, Charlie Rose echoed, “Ben Carson is lighting up the gun control debate with controversial comments on mass shootings.” In an interview with the candidate, Gayle King lectured Carson from the left, insisting, “At the time of the Second Amendment though they were talking about muskets they weren't talking about the AK 47s and the high-powered rifles that we have today.” 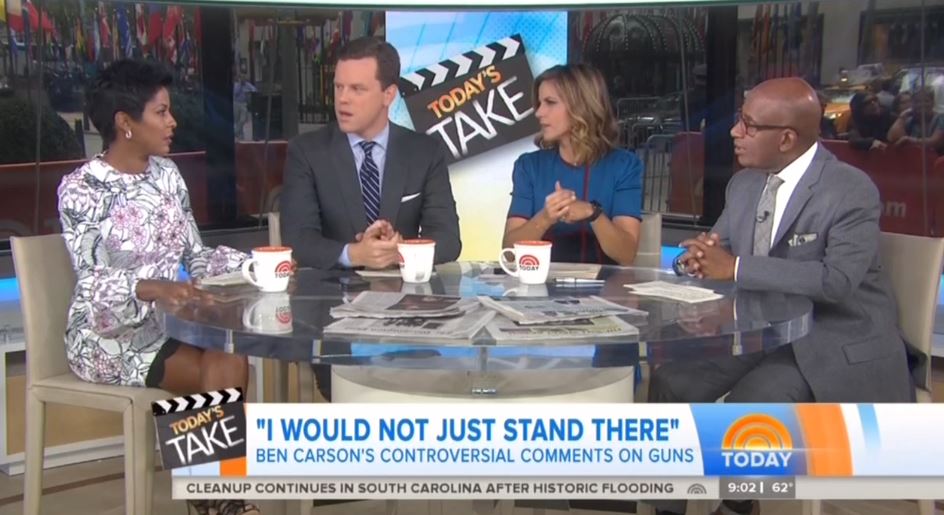 In contrast, when Clinton made a controversial linking of Republicans to the Holocaust, suggesting they want to put illegals in “boxcars,” the networks ignored the remark.

On Monday, when Clinton strongly came out for new gun control laws, it was not deemed controversial. Instead, the networks hailed the “emotional” Democrat who was “on fire” with a “tough new stance.”

A transcript of the October 7 Today segment is below: 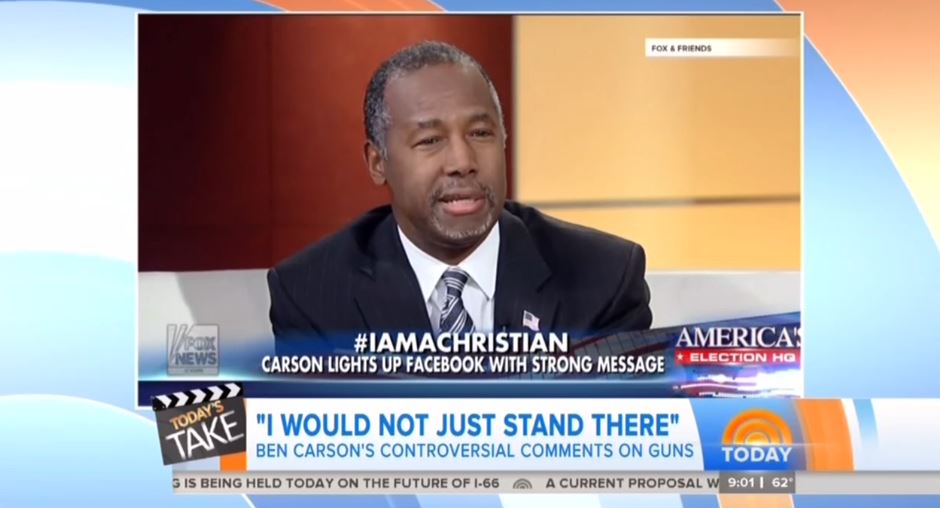 WILLIE GEIST: Let's jump into some presidential politics. Dr. Ben Carson is a guy who’s surprised a lot of people. He’s at or near many of the national polls, tied with Donald Trump in some of them. And he lit up the gun control debate with some new comments on mass shootings, of course, reflecting on last week's terrible day in Oregon. Here’s what Dr. Carson said on Fox & Friends about how he would have responded if a gunman asked him, “What religion are you?”

BEN CARSON: Not only would I probably not cooperate with them, I would – I would not just stand there and let them shoot me. I would say, “Hey, guys, everybody attack him. He may shoot me but he can't get us all.”

[ON-SCREEN HEADLINE: “I Would Not Just Stand There”; Ben Carson’s Controversial Comments on Guns]

GEIST: He said that this morning – or yesterday morning, and then reiterated it had again when he was asked again and again. A lot of people taking great offense to someone stepping back from the comfort of a presidential campaign and saying, “Here's what I would have done,” as nine people were shot. Many of them reportedly asked what their religion was, when they said “Christian,” they were gunned down.

NATALIE MORALES: Yeah. I mean, it's beyond insensitive. It's hard to hear that.

TAMRON HALL: Well, Bill Kristol, the conservative columnist, obviously a legend in the conservative world, attempted to defend the remarks this morning on Morning Joe, the show that Willie’s on as well, and his point was that Dr. Carson was not saying that these victims did anything wrong.

HALL: That he was pointing, for example, 9/11, with Flight – United Flight 93, when we know those passengers fought back. That's at least one person's explanation, perhaps, for Dr. Carson's remarks.

HALL: But then he went on and made similar comments on another program, Dr. Carson did.

GEIST: Yeah, I think just as a rule, don't explain what you would have done in a moment none of us could imagine in our worst nightmares.

MORALES: You don't know how you're going to react, yeah.

AL ROKER: I think if he wants to comment on it, good for him, but I think there are many people who would probably say, “You know what, I'm not in those people's shoes, I'm not going to even begin to presume.”

HALL: And isn't it more important that we hear your policy proposals, potentially, on this conversation, a more substantive conversation, rather than if-then scenarios that certainly lead people to assume that you are saying that these poor people who lost their lives were passive and that you somehow would have been aggressive. ,

MORALES: And that wasn't the point I think he was intending to say, that you know, these people were not passive. I think it was just more his idea of if we, you know, work together and take down the shooter – but, yeah.

HALL: But when the shooter's armed with a semiautomatic weapon – that wasn't the case in this Oregon shooting, but other times. But the bottom line, again, is one of those conversations that we have. I always think when we all watch the same video and the majority of people go, “What did he say?” That's usually not – we're not all crazy here.

GEIST: Part of his explanation last night when he was asked again about it on a different show was that, “I want to plant the seed for the next victim so that they react in a different way.” But my goodness, who would ever second guess people in that situation?

HALL: Yes, I don't understand it.

GEIST: You mentioned policy. Part of it is here. Dr. Carson suggested in an interview with USA Today that if he had a child in kindergarten he would want school security guards and even possibly that child's teacher to be armed, saying, “If the teacher was trained in the use of that weapon and had access to it, I would be much more comfortable if they had – if they had one than if they didn't.” Later in the day he appeared on The View and was asked to clarify that comment.

[ON-SCREEN HEADLINE: The Gun Debate; Should Teachers in Schools be Armed?]

JOY BEHAR: So where would the weapon be?

CARSON: It would be secured in a place where kids could not get to it.

BEHAR: You want that teacher trained.

CARSON: I want that teacher trained in diversionary tactics and whatever needs to be done in order to get there.

GEIST: By the way, that's not an unpopular position.

GEIST: If you poll-

MORALES: Yeah. There are a lot of people, yeah, who feel this way.

GEIST: There's a strong argument to be made that you could employ a retired police officer or a veteran who’s looking for work to be in the parking lot in cat and be a security guard at a school.

ROKER: I don’t think there’s anything wrong with that.

HALL: But the other argument, guys, of that is that there were armed security people at Columbine.

HALL: And so, again, that's a part of the substantive conversation that you can have, but it has to be an informed conversation, and when people say and support the statement from Dr. Carson –  and point out many people do – there is the other side of Columbine.

MORALES: It's just such a sad commentary on, you know, where we are in the world today.

MORALES: We’re having to have a conversation about arming our teachers and I think a lot of people are having that conversation now across the country. But at the same time, it just makes you, as a parent, sick to your stomach the thought that you have to think that way now. Now our schools have – you know, I know my school just put multiple security features on top of what was already there. And that’s the reality that we live in.

HALL: I don't know if you saw this Oregon mom. Her daughter was inside the community college, Umpqua, when this happened, and she said very clearly that if her daughter had been armed she feels that her daughter could have helped out, and there she is a parent frightened to death that she lost her daughter.

HALL: And she strongly believed, and to your point about, you know, this is something that many people support. She said, “If my daughter – I wish my daughter had been armed.”

HALL: And that's a parent speaking.

ROKER: We're not gonna solve this, obviously, but there's a lot of back and forth that's going to continue.