George Stephanopoulos to Jeb Bush: Why Is Trump 'Out to Get You?'

For the second day in a row, Good Morning America's George Stephanopoulos on Thursday interviewed a Republican presidential candidate, grilling Jeb Bush on his floundering campaign: "You've had a pretty tough summer. Polling averages show you in single digits nationally, single digits in Iowa, single digits in New Hampshire. What happened and how do you turn it around?"

Stephanopoulos alternated between highlighting Donald Trump's attacks on Bush and sympathizing with the former Florida governor. At one point, the journalist reminded that Trump "also called you low energy, a stiff. Says you're a joke on immigration. The last thing we need is another Bush. Why do you think he's out to get you?"

Stephanopoulos also noted Trump's critique of Bush speaking Spanish: "Your wife Columba comes from Mexico. What was your first thought when you heard him criticize you for speaking Spanish?"

On Wednesday, the co-host talked to Trump and wondered if Bush was "drawing blood." 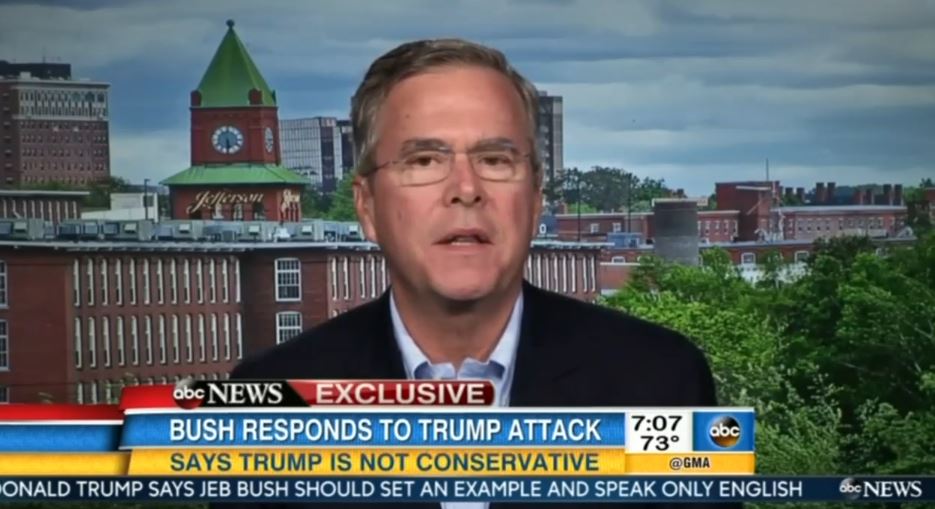 In 2015, the journalists at GMA have secured no interviews with Hillary Clinton, but have featured Martin O'Malley twice and Bernie Sanders once.

On June 1, 2015, Stephanopoulos wanted gossipy information from O'Malley, wondering, "I know you called Secretary Clinton right before you announced. Did you tell her this was coming, and how did she respond?"

He even managed to ask about the Democrat's musical skills:

GEORGE STEPHANOPOULOS: Finally a lot of Americans may not know you play in a rock 'n' roll band, you also have played a little guitar, "Hail To The Chief," as you had a video right before you announced. Are we gonna see that guitar, there it is, are we gonna see that more on the campaign trail?

A transcript of the September 3 GMA segment is below: 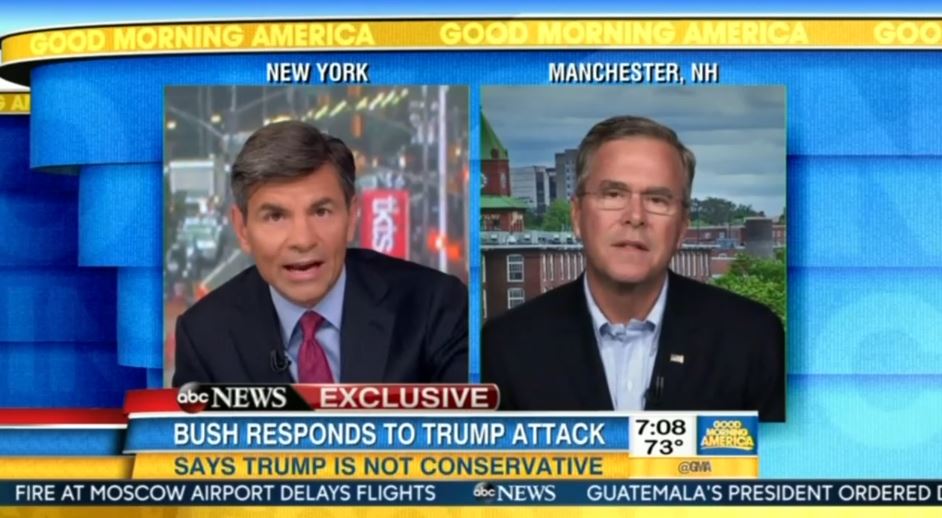 GEORGE STEPHANOPOULOS: Let's hear from the man himself right now. Thank you, Jon. Jeb Bush joins us from Manchester, New Hampshire. Governor Bush, thanks for joining us this morning. We showed that tweet from your campaign manager. Is that what you think, that Donald Trump is a one-man mission to kill the GOP?

JEB BUSH: I think -- I think Donald Trump is trying to insult his way to the presidency and it's not going to work. People want an uplifting, hopeful message. People come to this country to pursue their dreams. Sometimes they start without speaking English, but they learn English and they add vitality to our country. And the fact that he would say you only can speak English is kind of ridiculous, if you think about it. Are we going to close all the foreign language classes? I he – Why would he have a contract with Univision for his beauty pageant. I mean, this is a diverse country and should celebrate it and embrace a set of shared values and Mr. Trump doesn't believe in those values. He wants to tear us down. He doesn't believe in tolerance. He doesn't believe in the things that have created the greatness of this country.

STEPHANOPOULOS: You know, this is also personal for you, of course, your wife Columba comes from Mexico. What was your first thought when you heard him criticize you for speaking Spanish?

BUSH: I laughed. I mean, this is a joke. I was in a press gaggle where people asked me a question in Spanish and I answered it in Spanish. I was in a classroom two days ago, La Progesiva High School, where these young, beautiful kids all speak English, but they also speak Spanish and one asked a question in Spanish. I answered it. That's the reality of America, the goodness of America, that's the kind of America we want. So part of it is you laugh because it's so bizarre but it's hurtful for a lot of people and Mr. Trump know there is. He is appealing to people's angst and fears rather than higher hopes.

STEPHANOPOULOS: He's also called you low energy, a stiff. Says you're a joke on immigration. The last thing we need is another Bush. Why do you think he's out to get you?

BUSH: I think he's out to get everybody. He doesn't have a set of plans. If he had to actually do the traditional thing which is here's my policy as it relates to immigration. His policy is not serious. It would cost hundreds of billions of dollars. It's probably unconstitutional. It violates civil liberties. If he had to actually debate the points on taxes and regulation, people would be surprised that he is, he is a liberal in many of these views, the express views he has on taxes, on health care are views that are more closely similar to those of Hillary Clinton.

STEPHANOPOULOS: You know, the chairman of the RNC, Reince Priebus,  is now circulating a loyalty pledge among all the candidates. Mr. Trump told me yesterday he'd support you over Hillary Clinton if you get the nomination. Would you support him?

BUSH: Yeah, I would, of course. Of course, I would.

BUSH: We need to be unified. We need to win. And I think Mr. Trump is -- ought to figure out a way maybe to lessen the divisive language, the hurtful language and talk about the aspirations of the American people rather than try to prey on their fears.

STEPHANOPOULOS: There is that Hillary Clinton headline this morning as well. One of her staffers taking the fifth after being subpoenaed to the House committee. What do you make of that?

BUSH: She hasn't been truthful. She has had a private server hidden from the Obama administration against their rules. We found out about it because of an FBI investigation. People have paid a heavy price for something similar to what she's done. She should come clean. She should say why she did what she did. Classified information should not be on private servers and the world we're living in where she spent most of her time traveling around the world apologizing for the leaks that were done by the Manning episode and the Snowden episode she should have known this was completely inappropriate and might be illegal.

BUSH: Turn it around by recognizing it's a long road. We have a well-funded campaign. Next week, I unveil a tax plan that I'm really excited about that will create economic opportunity. I'm focusing on how can we lift people out of poverty, how can we give the middle class a pay raise for the first time in 15 years. We have big, structural problems in our country and my focus is on giving people a sense of my leadership skills to help them. And Over time, I think it will be an effective message.

STEPHANOPOULOS: Governor Bush, thanks for joining us this morning.