Despite the fact that most Republicans condemned Donald Trump, a CBS journalist on Monday speculated that the candidate's attack on John McCain's war record might "damage" the entire party. CBS This Morning co-host Norah O'Donnell talked to contributor Frank Luntz and wondered, "Does what he's saying damage at all the Republican brand?"

Luntz, who interviewed Trump on Friday when he made his controversial comments, speculated, "It could because it just makes all of this almost like a circus." He hinted that this could doom the GOP in 2016: "I believe if this continues to become even more contentious between Trump and the Republican Party, then we have to start to consider the possibility of a third party movement."

In contrast, Democratic candidates Martin O'Malley and socialist Bernie Sanders this weekend were heckled at the far-left Netroots Nation for not being liberal enough. O'Malley was booed for having the temerity to say that "every life matters." Will this kind of extremism "damage" the entire Democratic field? The networks didn't say as they didn't cover the story on Monday.

On Friday, Trump said of John McCain, a man who was shot down and then tortured for five and a half years during the Vietnam War: "He’s not a war hero... He's a war hero because he was captured. I like people that weren't captured." Condemnation swiftly followed by almost all of the other Republican candidates.

On Sunday's Meet the Press, Chuck Todd wondered if the Republican Party was facing a "reap what you sow" issue. He insisted the GOP "embraced Donald Trump four years ago...during his whole birther craze at the time and you actively reached out for him." Todd wondered, "In hindsight was that a mistake for the party in general to embrace Trump four years ago?"

A transcript of the July 20 CBS This Morning segment is below: 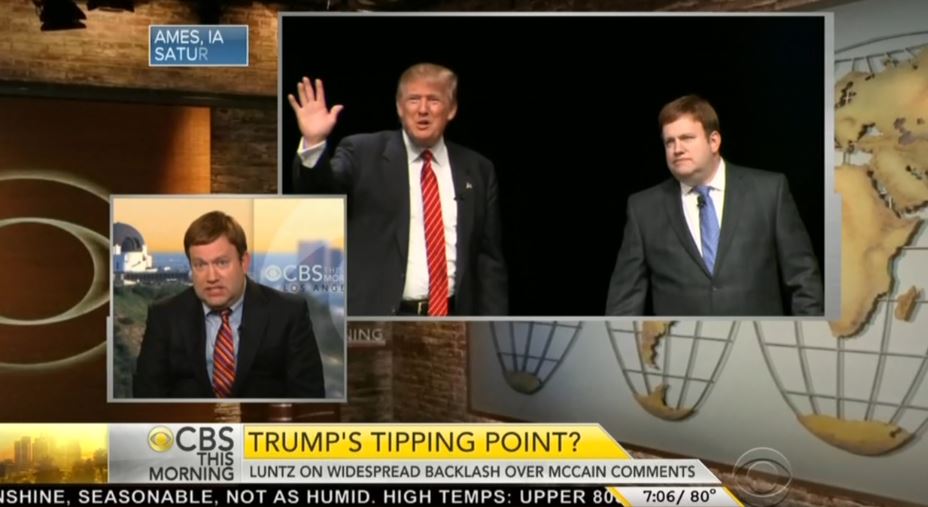 CHARLIE ROSE: Nancy, thanks. Republican strategist and CBS News contributor Frank Luntz was interviewing Donald Trump in Iowa where he made the comments about Senator McCain. Frank is with us from Los Angeles. Good morning.

LUNTZ: I think it's even more significant. In the last 24-hours, the fact that Trump has still refused to back down, the fact that he wrote that op-ed, tells me that he's absolutely positively in this race to stay. And, in fact, Charlie, let's take this a step further. I believe if this continues to become even more contentious between Trump and the Republican Party, then we have to start to consider the possibility of a third party movement, that Donald Trump has the money that Ross Perot had. He has an even greater degree of commitment to this race. He doesn’t play by the rules that any other candidate plays and in fact in response to a question from the audience as I was interviewing him, he markedly refused to commit to support the Republican nominee. That this could be the beginning of a third-party candidacy. 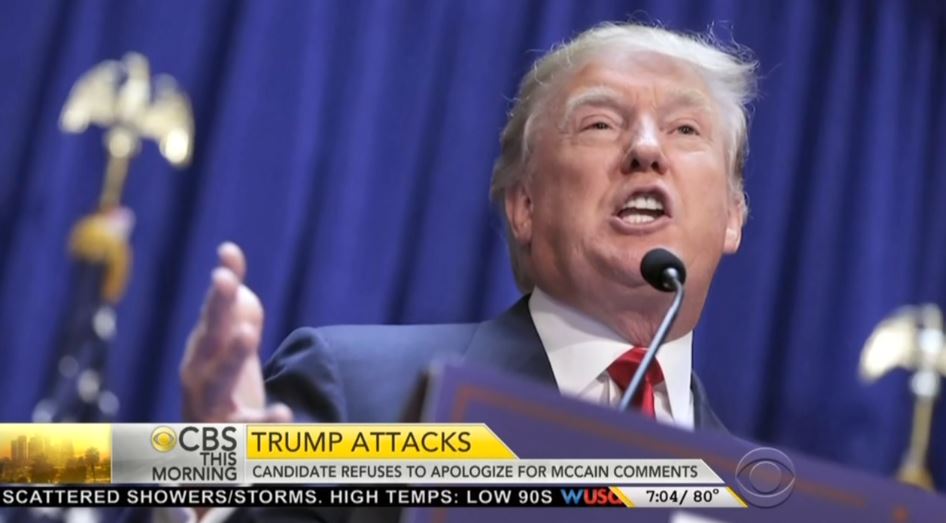 GAYLE KING: So it may be contentious Frank but how do you explain he is still number one in the polls?

LUNTZ: Because, and that’s a great question, there's a segment of American society that has had it with politicians that seem to be structured, that use poll-tested phrases. Donald Trump says what a lot of people are thinking but are unwilling to say, and so they gravitate to that. But what's different about this time is that when you attack -- when you attack the veteran community as they perceive it to be an attack and I've done my research over the last 24 hours, that you can ignore certain segments of American society. In a Republican primary, veterans matter. And this is going to be a very tough time for Donald Trump. But he's not backing down and there is no way he’s going to apologize.

NORAH O’DONNELL: Does what he’s saying damage at all the Republican brand?

LUNTZ: It could because it just makes all of this almost like a circus. But what bothers me most is that we’re so early into this process and they're already using such horrific language to attack each other that when you’ve got a combination of tens of hundreds or hundreds of millions of dollars to spend and candidates that are prepared just about anything about each other, this could be the ugliest campaign in modern times and we already know that at least one of these candidates, Donald Trump, is prepared to go ugly early.

KING: You're in the room Frank, and you’re looking at him eye to eye, you talked to him before, during and after. Do you really believe that he believes what he's saying or is he just trying to be provocative, and what was the reaction in the room when he said it?

LUNTZ: I absolutely believe that he believes it and I believe that he’s going to do it differently. He challenged me. He said that I was trying to make him politically correct when I was asking him do you really want to use these words? Is this your meaning? But I'll tell you that there were boos when he made his comment about McCain and about veterans who were captured. Did he get a standing ovation at the end? Yes. But all ten presidential candidates got standing ovations and in fact everyone in the room got up for the other candidates, not everyone got up for Donald Trump. This is going to be a nightmare of a campaign if he insists on being so uncivil and so disrespectful but you'd better get ready for it.

ROSE: I find the notion that the logic of if he was shot down that he’s not a hero America will not accept that.

LUNTZ: To me I don't understand why somebody would say that. And I spent a lot of time with the POW’s over the last three years. And these guys are heroes. Donald Trump does not understand that he hit a chord and I believe he's going to face a lot of protests in the coming months.