On Friday, Morning Joe viewers got a dose of MSNBC’s finest hypocrisy. Consider this: Brzezinski and Scarborough are the pot, and Trump is the kettle.  The hosts berated Donald Trump for not attacking Clinton over the recent State Department Inspector General's Report and May's dismal jobs report, yet as per usual they side-stepped the very same issues. Instead, they continued to harp on his recent gaffes surrounding Trump University.  In fact, the I.G. Report only came up because of Former RNC Chairman Michael Steele:

JOE SCARBOROUGH: Can I stop you there for a second, Michael?

SCARBOROUGH: Can you believe the I.G. Report that came out talking about Hillary Clinton--

SCARBOROUGH: --playing fast and loose with information regarding drone strikes.

SCARBOROUGH:  As top secret as it gets.

SCARBOROUGH: And we have a Republican nominee that doesn’t--he's talking about Trump University.

We also have a mainstream media who is talking about Trump University. Every. Single. Day.

So, he was willing to stop Steele to point out the issue, but was unwilling to discuss it amongst a group of “experts?” This is what MSNBC lives for. Hosts like Brzezinski and Scarborough, who relish in moments where they can attack Donald Trump for not discussing the I.G. Report or the alarming jobs report, while they simultaneously circumvented those very same issues.

As they spent the entire first hour of the show criticizing Trump, they also highlighted his recent Twitter exchange with Clinton.

SCARBOROUGH: But again we're talking about tweets going back and forth with tweets instead of a response to the I.G. Report, on--

SCARBOROUGH: On, on, on acting fast and loose with classified secrets.

They’re tweeting, and what is MSNBC doing? Somebody needs to tell the cable network that they are pointing the finger at the wrong person. If Trump’s campaign is “running stupid” for not addressing these issues, as Brzezinski so eloquently put it, what does that make them? 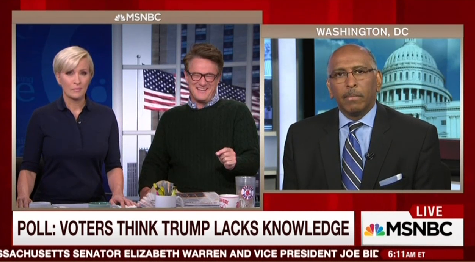 JOE SCARBOROUGH: Can I stop you there for a second, Michael?

SCARBOROUGH: Can you believe the I.G. Report that came out talking about Hillary Clinton--

SCARBOROUGH: --playing fast and loose with information regarding drone strikes

SCARBOROUGH:  As top secret as it gets

SCARBOROUGH: And we have a Republican nominee that doesn’t--he's talking about Trump University.

SCARBOROUGH: Are you kidding me?

SCARBOROUGH: That would be dominating the week, but for Donald Trump's own self-absorbed campaign.

SCARBOROUGH: And, and you’re right, you’re talking about that Michael.  You're exactly right. Mika, one of the most abysmal job reports we've had and it's responded to by one tweet.

BRZEZINSKI: I mean, he, the, the campaign is, is running stupid.

SCARBOROUGH: There is no campaign.

DONNY DEUTSCH: No, there is no campaign. I’ve said it all along.

BRZEZINSKI: They don’t even know how to play local politics.

SCARBOROUGH: I don’t think he does.

DEUTSCH: He is--I'm going to say it again. He's not going to be on the ticket.

BRZEZINSKI: We’ve always been friendly with him. Absolutely radio silent since this judge thing because he cannot be told he is wrong. And I will say you are wrong when one is wrong. As you know, and you will too. This is wrong. It shouldn't be done. You should apologize. Like, I can't get over it. I'm sorry.

SCARBOROUGH: It's not his brand.

BRZEZINSKI: Nor can you.

DEUTSCH: He can't do it, you're right.

BRZEZINSKI: And by the way, nor can a lot of people. This campaign is going downhill. I predict the worst—the next polls are even worse. This guy is literally deep sixing his campaign.

[Reading Tweet] “Obama just endorsed crooked Hillary. He wants four more years of Obama – but nobody else does!”

MIKE BARNICLE: Well that would be –[inaudible]

BRZEZINSKI: The Clinton Campaign Responded, [laughs] “Delete your account.” A popular internet expression for when someone has said something deeply inaccurate or tone deaf. As of this morning it has 375,000 retweets, making it Clinton's most popular tweet yet. Trump later responded, “How long did it take for your staff of 823 people to think that up, and where are your 33,000 e-mails that you deleted? RNC Chairman Reince Preibus tweeted at Clinton, “If anyone knows how to use a delete key, it's you.” [Laughs around the table]

BRZEZINSKI: RNC’s Communications director Sean Spicer added, “Whichever intern just sent this doesn't get it's not smart for you to talk about deleting anything cc @FBI.” Kasie Hunt, um. Wow, what a zinger on Twitter. [Laughter] I’ve got to tell you, this would have been a great weak spot for Hillary Clinton, the campaign must be so relieved that there is no Trump campaign that can think beyond Donald Trump’s very thin skin and the criticism he is getting about the judge.

KASIE HUNT: Look, the Clinton campaign, I think, could not be in a better place put to it mildly.  I mean, think about what we learned yesterday. So, Hillary Clinton is going to walk out on the campaign trail. It’s going to be her, it’s going to be Bill Clinton. It’s going to be President Obama, it’s going to be Joe Biden, it’s going to be Elizabeth Warren and at this point it's probably also going to be Bernie Sanders. That is a formidable team. And right now they are up against a Republican party that frankly can't stand behind its current nominee because of the things he has been saying. So, the staff at headquarters yesterday was gathered around a couple of TVs they had there as they watched that video from President Obama, clapping and cheering. Some of those aides have been with had Hillary Clinton for a decade and they remember her crying in front of secret service agents when she lost the nomination to Barack Obama almost eight years to the day since that actually happened. And now I think it really was a moment. And we've been talking about VP speculation. One Clinton aide told me that Elizabeth Warren has proven herself to be an attack dog against Donald Trump in a way that honestly they are a little surprised by. They are not ready to engage in kind of more direct reported out VP speculation at this point, but she certainly put herself back on the radar in that way.

SCARBOROUGH: But again we're talking about tweets going back and forth with tweets instead of a response to the I.G. Report, on--

SCARBOROUGH: On, on, on acting fast and loose with classified secrets.