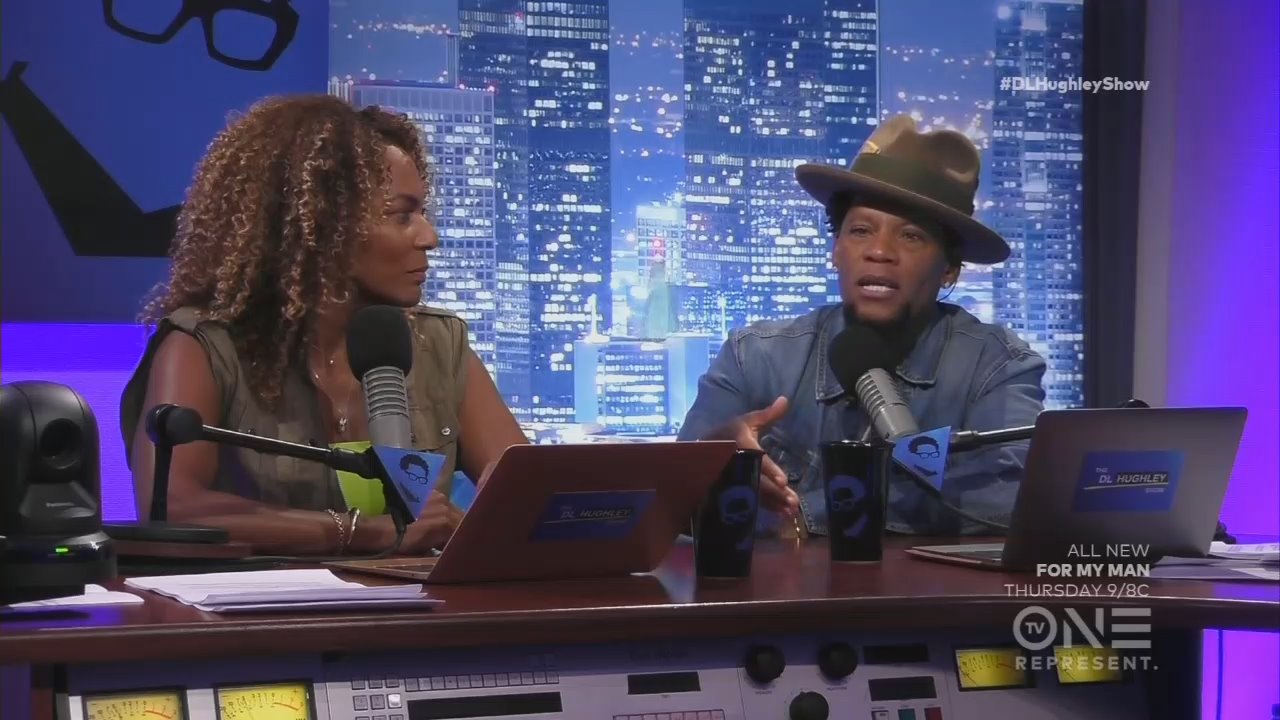 During the D.L. Hughley Show on the TV One network on Tuesday night, the eponymous host and his panel discussed the “D.L. Question of the Day” on social media asking “could you be friends with a staunch Trump supporter?” After Hughley answered “hell no,” the conversation quickly turned into a tirade against Trump supporters; whom Hughley trashed as “morally vacant,” “self-centered,” and worse humans than devil-worshippers.

While Hughley might not seem like a journalist at first glance, keep in mind that he hosted a show called D.L. Hughley Breaks the News on CNN, “the most trusted name in news.” On one particular episode of his short-lived show, Hughley claimed that Republicans “literally look like Nazi Germany.” Based on his show Tuesday night, which aired ten years after he made those incendiary comments, it looks like Hughley’s rancor towards Republicans has not cooled off one bit.

Hughley implied that Trump supporters were “self-centered” because of their focus on the economy and the appointment of conservative judges before calling them “the most vacant group of people.” Hughley proceeded to go way off the deep end, declaring that “you could worship the devil and be a better human being than if you worshiped Donald Trump.” Hughley urged his audience to “look up the tenets of the Church of Satan...and then go to a Trump rally and you’ll feel safer around Beelzebub than this dude.”

Throughout the segment, Hughley and his panel argued that it was “impossible” to be a Trump supporter and a good person. When panelist Jay Phillips tried to argue that some people might “slightly support” the President while disagreeing with his most controversial actions, co-host Jasmine Sanders claimed “I don’t think you can do that. That’s like saying ‘I’m going to eat a burnt piece of toast but scrape the burnt off.’ It still tastes burnt.”

Later, Hughley noted that President Trump is referring to “the Squad” as anti-Semitic before arguing “his supporters are anti-Semitic,” adding “he’s calling them racist, he’s racist...when people committed acts of violence in your name and you don’t denounce them and you still support him, you are a vacant human being.” After Hughley reiterated the point that it is impossible to be friends with a Trump supporter, Sanders argued that “you have, I guess, certain requirements that you have of friends in your circle.” According to Hughley, “one of them is to be human,” implying that Trump supporters are subhuman.

This entire segment illustrated the sad reality of 2019, where politics has invaded every aspect of American life. Sanders claimed she could not be friends with a Trump supporter because “we’d argue all the time,” as if there was nothing else to talk about but politics. No wonder we live in such a divided country.

A transcript of the relevant portion of Tuesday’s edition of The D.L. Hughley Show is below. Click “expand” to read more.

JASMINE SANDERS: Welcome back to “The D.L. Hughley Show.” Now, on our radio show for our “D.L. Question of the Day” on social media, we asked, “could you be friends with a staunch Trump supporter?”

HUGHLEY: …they, it’s not like somebody who likes the music you don’t like or a religion you don’t like, you know, or something, you know, but…but I think that to have seen all the things that have gone on, you eitherly have to be obtuse or unconcerned. I don’t care…and the only argument I get from Trump supporters, “I like some of the things he’s done…”

HUGHLEY: And the bottom line is, he is…he is in charge of an economy that was already…he had a black man that brought it back from the brink of the…the precipice of destruction. He’s driving the car downhill. That’s like, you…

HUGHLEY: You ain’t a race car driver because you’re driving a car downhill any more than you’re an artist because you’re tracing the lines and, and…the just, the things that they allow…I just, you cannot be my friend if you’re that vacant a human being.

SANDERS: No. First of all, we’d argue all the time.

SANDERS: All the time.

JAY PHILLIPS: I think the key word in all of this is “staunch.” I mean because you, you could…I know some people who…who might have, you know what I’m saying, like might have…might slightly support and just like stay away from the things that they don’t agree with but they’s like…in general, they’re cool.

SANDERS: I don’t think you can do that. That’s like saying “I’m going to eat a burnt piece of toast but scrape the burnt off.” It still tastes burnt.

PHILLIPS: But…but the only point that I’m saying is like they don’t push none of the…the things that I would have a problem with. Just like, you know, Obama wasn’t perfect but, you know, the things that we…we can have a discussion about the things he didn’t do wrong.

HUGHLEY: There’s a difference between not being perfect and being a morally vacant person.

GEOFF BROWN: It’s a big case of “not in my backyard.”

SANDERS: Right. Absolutely. I mean, I think there’s a difference even when…you know, prior to the Trump administration, you know, I had friends who were Republicans. There was someone in my family who’s a Republican. I could sit down and have a conversation with them…

SANDERS: …because they were a decent human being…

SANDERS: …and we at least agreed on some of those core values, right? But with this guy, there is nothing about him that is likable.

BROWN: …you know what me and my friends have in common? We love the same. I don’t love like that dude. How are you going to think these things and love me?

HUGHLEY: You can’t. You can’t and it’s really hard. I’m talking about somebody that will… listen, if, if…I, I love Barack Obama, but if he was doing that, I would be his loudest opponent. I would not tolerate…

BROWN: No, you wouldn’t.

HUGHLEY: Absolutely. I’d be the…you’d be the second one but I…I’m not, I think that there are things that are allowed because they…everybody’s only concerned…it’s so self-centered, I’ve never seen anybody talk about anything other than the economy or anything other than the judges. And really, all he’s about is making sure a certain group of people who are a minority stay in charge. He’s selected that judges are inclined to, to…like, Isaiah Washington going back-and-forth about…about Trump and the…and the, and the whole, you know, prison thing. The bottom line is he might be for prison…the reducing mandatory prison sentences but he appoints judges that are inclined to give black people and brown people harsher sentences.

HUGHLEY: So, what is the point? It’s all optics. They’re the most vacant group of people. We talked about this on the radio. Devil worshipers has a…have a higher standard than he does.

HUGHLEY: Devil worshipers. You couldn’t be a pedophile, you can’t speak bad about people, you can’t take things from people…like, you could worship the devil and be a better human being than if you worshiped Donald Trump. Like honestly, I’m not even just…look up the tenets of the church of Satan…

SANDERS: And I didn’t believe it and looked it up. It’s true.

BROWN: I was asking myself that.

HUGHLEY: …and then go to a Trump rally and you’ll feel safer around Beelzebub than this dude. I’m telling you.

SANDERS: Yeah. You don’t want to be around Beelzebub.

HUGHLEY: All right. Carmel, come in for a minute.

SANDERS: We don’t want that.

HUGHLEY: How are you, beautiful?

HUGHLEY: So, the question was, do you think that you could be friends with a staunch Trump supporter? What was the…what were the answers?

DAWKINS: Someone said “I don’t trust a Trump supporter. I respect your decision to support him. Just respect my decision to not trust you.”

KYLE HUGHLEY: There you go.

HUGHLEY: It’s like the things they didn’t see. I didn’t notice he did…They get to be obtuse.

BROWN: I didn’t know he said that.

HUGHLEY: He didn’t say that. I never said it. They…he’s a liar. Like, he…like if you were playing a game called who’s a [bleep], he would win.

HUGHLEY: Kids by different people…can’t write. Everything he…

HUGHLEY: He was everything they thought Obama would be, he is. And he’s actually the first affirmative action hire. He only got hired because he was white, literally.

DAWKINS: Someone else said “my family is divided for sure but we will never let politics ruin our relationship. Everyone has a right to believe in what they think is right.”

DAWKINS: Right. But what is right.

HUGHLEY: Is…is right taking…listen…is…if, if, if what he does…like when he’s trying to malign all of those, those, those…the squad, and he’s calling them anti-Semitic. His supporters are anti-Semitic. He’s calling them racist. He’s racist. When you sit up there and watch somebody get killed at Charlottesville and you said there are good people are on both sides and you never even called that woman to pretend like you cared about her, when somebody dies who served this country and you still talk about him in death, when you say the things that you have about immigrants…when you are…when you are talking about “we’re going to get guns and put them on the border and all that kind of stuff,” when people get shot down and…and people say all of these…when people committed acts of violence in your name and you don’t denounce them and you still support him, you are a vacant human being.

HUGHLEY: I just, I mean…

SANDERS: I don’t even think I could be friends with someone like that.

SANDERS: Think about it. You have…you have levels of, of…you have, I guess, certain requirements that you have of friends in your circle…

HUGHLEY: And one of them is to be human.

SANDERS: …and another is to tell the truth.

SANDERS: You have to be able to tell the truth to be my friend.

HUGHLEY: I believe lying is loving.

SANDERS: No, I don’t know about that. That is certainly not true. What do you think, Carmel?

DAWKINS: And I can’t be friends with somebody that believes in the same things that Trump believes in.

DAWKINS: I don’t feel safe around you. I don’t trust you.

DAWKINS: …talk about nothing.