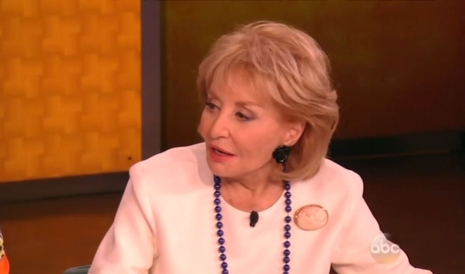 Longtime ABC News personality Barbara Walters died Friday at the age of 93. While she shouldn’t be confused with one of those classless left-wing hacks you see too much of in today’s media landscape (even on her daytime creation The View), Walters nonetheless exhibited a typical Manhattan liberalism that celebrated even the most flawed Democratic partisans.

Both Bill and Hillary Clinton were heroes to Walters. Despite Bill’s obvious flaws, “he’s beloved by many people with a very good marriage,” Walters claimed on The View in 2011. On Walters’ last show in 2014, she told Hillary that she regarded her with “admiration” and “very deep affection.”

She fawned over both of the Obamas, saying in 2008 that Barack Obama “has redeemed the American promise that an individual can make his own destiny and create a new world.” When California liberal Nancy Pelosi became House Speaker in 2007, Walters cheered: “Hooray!” And she flattered law professor Anita Hill, who attempted to torpedo Clarence Thomas’s Supreme Court nomination in 1991: “To so many of us, you were our heroine.”

She came away impressed after interviewing Venezuela’s left-wing dictator Hugo Chavez in 2007: “He was very dignified. He was warm, friendly.” And in 2002 Walters must have pleased Cuba’s communists as she recited their party’s propaganda about education in the prison state: “If literacy alone were the yardstick, Cuba would rank as one of the freest nations on Earth.”

Walter in 2012 also denied that “most” journalists even had opinions: “You don’t know whether we’re Republicans or Democrats or exhibitionists.”

Here are a dozen quotes from the MRC’s archives (some with video) that will give you a flavor of Walters’ opinions:

■ Ex-Secretary of State Hillary Clinton: “The ‘fascinating’ list has always been, you know, a particular interest of mine — and then, to be on it was an incredible honor.”
Retiring host Barbara Walters: “Well, you were our most fascinating....I think you’ve been on our ‘most fascinating’ list more than anyone, and — and you were THE most fascinating....No matter what their political views, you are someone we admire — and, for me, it’s more than admiration — it’s very deep affection, and I thank you for coming on....No matter what she does, she will always, to me, be the most fascinating.”
— Exchange on Walters’ last day as co-host of ABC’s The View, May 16, 2014.

■ “I would just like to say that I’m honored to be meeting you. I watched those hearings as did so many other people. And to so many of us, you were our heroine.”
— Longtime ABC News reporter and anchor Barbara Walters to law professor Anita Hill, who accused Justice Clarence Thomas of sexual harassment before his 1991 confirmation, on ABC’s The View, March 19, 2014.

■ “Mr. President, Mrs. Obama. There is a photograph of you [hugging] that went viral, became the most shared photograph in the history of Twitter. How do you keep the fire going?”
— Barbara Walters to the Obamas in an interview excerpt shown on ABC’s World News and Nightline, December 26, 2012.

■ “There are journalists where the whole thing is how opinionated can you be?...But, most of us, do not — you don’t know whether we’re Republicans or Democrats or exhibitionists.”
— Co-host Barbara Walters on ABC’s The View, April 9, 2012.

■ ABC’s Barbara Walters: “I know that you answer people’s letters all the time. And what we thought that we might do, we asked middle school and high school students to throw a few questions. I’d like to read their questions: ‘If you were a superhero and you could have one super power, what would it be?’”
President Obama: “You know, I’ve talked to Malia about this. We both agree that flying seems like it would be a pretty good thing to be able to do.”
— Clip of interview played on ABC’s The View, December 19, 2011.

■ “We had a President named Bill Clinton who went through a great deal of trouble, weathered the storm and is now not only respected, but he's beloved by many people with a very good marriage. So, I think Anthony Weiner should hang in there. He was a good Congressman, and maybe he can weather this all and be effective.”
— Barbara Walters to her co-hosts on ABC’s The View, June 9, 2011.

■ “His [Barack Obama’s] belief that there is a place in America for someone who transcends the usual labels has brought us all to this place....In becoming President, he has redeemed the American promise that an individual can make his own destiny and create a new world. We are all members of that new world now, and that for us makes him the Most Fascinating Person of 2008. Good luck, Mr. President.”
— ABC’s Barbara Walters on her December 4, 2008 special, The 10 Most Fascinating People of 2008.

■ “He [Syrian dictator Bashar al-Assad] was a very intelligent, a well-informed, thoughtful — he spoke perfect English, wants very much to have relations with this country, has some solutions for ending the war in Iraq. She [Assad’s wife] was educated in England, worked in this country, speaks English the way I’m talking to you, lovely, intelligent. I don’t want you to say, people say, ‘Oh, you’re brainwashed.’ But that was not it. They just were very charming and intelligent.”
— ABC’s Barbara Walters recounting her trip to Syria on The View, July 7, 2008.

■ “A lot of the film [Sicko] is about, is about the insurance companies and the condemnation of them. I just have to say, I don’t usually give opinions, but whatever — you’re Republican or Democrat or whatever you are, this is an amazing film. I thought it was — I think everybody should see it. When it premiered last night, you got a standing ovation. That’s unusual for you. Everybody loved you.”
— Barbara Walters to left-wing filmmaker Michael Moore on ABC’s The View, June 19, 2007.

■ “Well, he was not what I expected. He was very dignified. He was warm, friendly. He likes the U.S. It’s George Bush that he doesn’t like. He also was very personal. He talked about how hard his life was, that he wished he could be in love but you can’t be when you are heading a country.”
— ABC’s Barbara Walters recounting her interview with Venezuelan President Hugo Chavez, March 16, 2007 Nightline.

■ “I was watching the State of the Union....The treat was to see the first female Speaker of the House, to see Nancy Pelosi....The most dramatic moment...was when the President came out, turned around, you know, she’s sitting behind, shook hands with her and said, ‘Madame Speaker.’ Hooray!”
— ABC’s Barbara Walters on The View, January 24, 2007.

■ “For Castro, freedom starts with education. And if literacy alone were the yardstick, Cuba would rank as one of the freest nations on Earth. The literacy rate is 96 percent.”
— Barbara Walters narrating her interview with Fidel Castro on ABC’s 20/20, October 11, 2002.