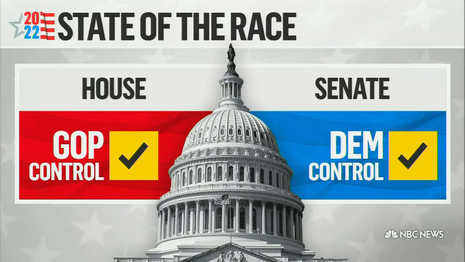 This year’s midterm elections turned out to be a draw: Republicans gained enough seats in the U.S. House to take the majority for the first time in four years, but lost a seat in the U.S. Senate, leaving Democrats in control. Yet compared to other midterms, when the party in the White House lost far more seats in Congress, it seemed as if Biden’s Democrats dodged a bullet.

Liberal (and some non-liberal) news organizations blamed the “extreme” elements of the GOP for winning fewer-than-expected seats. “Across the country, many Republicans who ran in this year’s midterms promoting far-right platforms on issues such as abortion, elections, LGBTQ rights and other topics lost their races, even in some unexpected places where the GOP was favored to win,” the Washington Post’s Colby Itkowitz typically argued Monday. 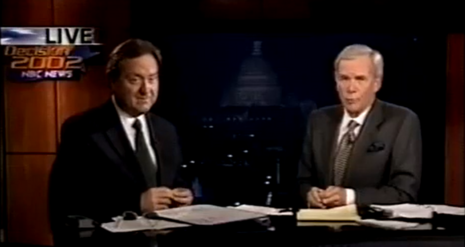 Twenty years ago, however, the shoe was on the other foot, with Democrats failing to realize the traditional historical gains of the party not in control of the White House. In fact, they did worse than the GOP did this year: Instead of gaining seats in the 2002 midterms, Democrats lost eight in the House, leaving Republicans in charge; in the Senate, control switched from Democrats to Republicans after a net gain of two seats for the GOP.

But instead of blaming the “candidate quality” of that year’s Democrats, or a party message that was out of synch with voters, liberal pundits whined that the real problem was that the media were too slanted towards conservatives for liberals to get a fair shake. That’s right, a pro-conservative press.

“Some of the major broadcast media are simply biased in favor of the Republicans, while the rest tend to blur differences between the parties,” New York Times columnist Paul Krugman complained in a November 8, 2002 op-ed. “Talk radio and Fox News let the hard right get its message out to its supporters, while those who oppose the juggernaut stay home because they don't get the sense that the Democrats offer a real alternative.”

Krugman’s advice: “Democrats should complain as loudly about the real conservative bias of the media as the Republicans complain about its entirely mythical liberal bias.”

“Even if Democrats pull together on some big issues, they’ll still have to overcome GOP bully pulpits in the White House and Congress — and a new reality: conservative bias in the media,” Time staff writer Josh Tyrangiel claimed in his magazine’s November 18, 2002 edition.

“There’s no doubt that the editorial page of the Wall Street Journal or the Washington Times or the New York Post or the commentary on Fox, is conservative and I think that they [Democrats] are extremely frustrated...they feel that they can’t get their message out...” NPR’s Mara Liasson channeled on the December 1, 2002 Fox News Sunday.

Fellow panelist Juan Williams, who was also with NPR at the time, agreed with the frustrated Democrats: “It seems to me that there’s some truth to it.”

Of course, the premise that the alphabet soup of establishment media organizations were all nonpartisan, and the only media bias existed at Fox and conservative talk radio, was just as laughable then as it is today. Witness the reaction on PBS to the slight Republican majorities produced by the 2002 midterms, as host Bill Moyers freaked out about how the “monopoly” government would promote George W. Bush’s “radical” agenda:

“The entire federal government — the Congress, the executive, the courts — is united behind a right-wing agenda for which George W. Bush believes he now has a mandate. That agenda includes the power of the state to force pregnant women to surrender control over their own lives. It includes using the taxing power to transfer wealth from working people to the rich. It includes giving corporations a free hand to eviscerate the environment and control the regulatory agencies meant to hold them accountable. And it includes secrecy on a scale you cannot imagine.
“Above all, it means judges with a political agenda appointed for life. If you like the Supreme Court that put George W. Bush in the White House, you will swoon over what's coming. And if you like God in government, get ready for the Rapture....
“So it’s a heady time in Washington, a heady time for piety, profits and military power, all joined at the hip by ideology and money. Don’t forget the money....Republicans out-raised Democrats by $184 million and they came up with the big prize: monopoly control of the American government and the power of the state to turn their radical ideology into the law of the land. Quite a bargain at any price.”
— Host Bill Moyers on PBS’s Now, November 8, 2002.

Crazy, wrong, and hardly non-partisan. But deaf to the nonsense they were spouting, liberal pundits preferred to blamed Fox News.