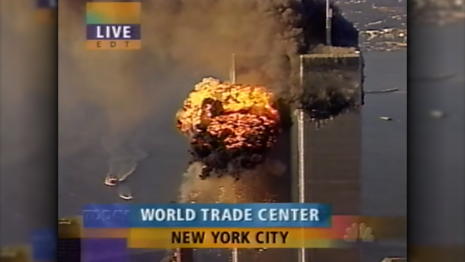 In the months and years after those horrible images of the Twin Towers collapsing in a cloud of dust, smug liberals have denigrated our military as a “fighting tool of American imperialism” and sneered that “human rights around the world have been a casualty of the U.S. ‘war on terror.’” They’ve claimed that the dead of 9/11 were “used to sanctify the state’s lust for war,” and lectured that “radical Christianity is just as threatening as radical Islam.”

Lest anyone forget, here are 20 quotes showing the Left’s often unhinged reaction in the days, months and years after the attacks, plus a video of the worst televised comments from our archives:

■ “Where is the acknowledgment that this was not a ‘cowardly’ attack on ‘civilization’ or ‘liberty’ or ‘humanity’ or ‘the free world’ but an attack on the world’s self-proclaimed superpower, undertaken as a consequence of specific American alliances and actions?...In the matter of courage (a morally neutral virtue): whatever may be said of the perpetrators of Tuesday’s slaughter, they were not cowards.”
— Novelist and playwright Susan Sontag writing for the “Talk of the Town” section of the Sept. 24, 2001 New Yorker.

■ “We have been the cowards. Lobbing cruise missiles from 2,000 miles away, that’s cowardly. Staying in the airplane when it hits the building, say what you want about it, not cowardly.”
— Host Bill Maher on ABC’s Politically Incorrect, September 17, 2001.

■ “We all know that one man’s terrorist is another man’s freedom fighter and that Reuters upholds the principle that we do not use the word terrorist....To be frank, it adds little to call the attack on the World Trade Center a terrorist attack.”
— Steven Jukes, global head of news for Reuters News Service, in an internal memo cited by the Washington Post’s Howard Kurtz in a September 24, 2001 article.

■ “Some people who hated Americans set out to kill a lot of us and they succeeded. Americans are puzzled over why so many people in the world hate us....We’re trying to protect ourselves with more weapons. We have to do it I guess, but it might be better if we figured out how to behave as a nation in a way that wouldn’t make so many people in the world want to kill us.”
— CBS’s Andy Rooney, 60 Minutes, September 10, 2006. 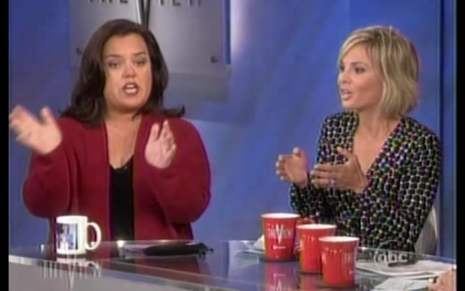 ■ “As a result of the [9/11] attack and the killing of nearly 3,000 innocent people, we invaded two countries and killed innocent people in their countries....Radical Christianity is just as threatening as radical Islam in a country like America.”
— Rosie O’Donnell on ABC’s The View, September 12, 2006.

■ “I do not believe the memory of the 7,000 plus people who were killed in these most horrendous acts of terrorism are honored by going out and killing other civilians. We went alone, we went alone when we bombed Tripoli at night, a crowded city where old people and children were sleeping. 1986, Reagan. We killed Qaddafi’s kid, and lots of other children. One person said, well, several people, ‘Well, he’s adopted,’ they said of the kid. And we got Pan Am 103, Lockerbie. Tell those loved ones, it was December 21, my birthday.”
— Phil Donahue on FNC’s The O’Reilly Factor, Sept. 25, 2001.

■ “What happened after 9/11 — and I think even people on the right know this, whether they admit it or not — was deeply shameful. [The] atrocity should have been a unifying event, but instead it became a wedge issue. Fake heroes like Bernie Kerik, Rudy Giuliani, and, yes, George W. Bush raced to cash in on the horror. And then the attack was used to justify an unrelated war the neo-cons wanted to fight, for all the wrong reasons....The memory of 9/11 has been irrevocably poisoned; it has become an occasion for shame. And in its heart, the nation knows it.”
— New York Times columnist Paul Krugman in a September 11, 2011 posting to his NYTimes.com blog.

■ “So when does SEAL Unit 6, or whatever it’s called, drop in on George Bush? Bush was responsible for a lot more death, innocent death, than [Osama] bin Laden. Wasn’t he, or am I wrong here?”
— Left-wing radio host and former CNN producer Mike Malloy on The Mike Malloy Show, May 2, 2011.

■ “Recovery and debris removal work continues at the site of the World Trade Center known as ‘ground zero’ in New York, March 25, 2002. Human rights around the world have been a casualty of the U.S. ‘war on terror’ since September 11.”
— Caption for a Reuters News Service photo distributed with a September 3, 2002 story by Richard Waddington headlined, “Rights the first victim of ‘war on terror.’”

■ “At the news of Osama bin Laden’s death, thousands of people — most of them college-aged and in requisite flip-floppy collegiate gear — whipped up a raucous celebration right outside the White House gates that was one part Mardi Gras and two parts Bon Jovi concert....It felt a little crazy, a bit much. Almost vulgar....When I saw that folks were celebrating in the streets at the news of bin Laden’s death, my first reaction was a cringe. Remember how we all felt watching videos of those al-Qaeda guys dancing on Sept. 11?”
— Washington Post “Metro” section columnist Petula Dvorak, May 3, 2011.

■ “The dead in the World Trade Center, the Pentagon and a field in Pennsylvania were used to sanctify the state’s lust for war....Because few cared to examine our activities in the Muslim world, the attacks became certified as incomprehensible by the state and its lap dogs, the press....Our brutality and triumphalism, the byproducts of nationalism and our infantile pride, revived the jihadist movement. We became the radical Islamist movement’s most effective recruiting tool. We descended to its barbarity. We became terrorists too. The sad legacy of 9/11 is that the assholes, on each side, won.”
— Ex-New York Times reporter Chris Hedges writing on Truthdig.com, September 10, 2011.

■ “I don’t support our troops....When you volunteer for the U.S. military...you’re willingly signing up to be a fighting tool of American imperialism....I’m not advocating that we spit on returning veterans like they did after the Vietnam War, but we shouldn’t be celebrating people for doing something we don’t think was a good idea.”
— Los Angeles Times columnist and former Time staff writer Joel Stein in a January 24, 2006 column.

■ “This is a racist and imperialist war. The warmongers who stole the White House (you call them ‘hawks’, but I would never disparage such a fine bird) have hijacked a nation’s grief and turned it into a perpetual war on any non-white country they choose to describe as terrorist.”
— Former Cheers star Woody Harrelson in an op-ed headlined “I’m an American tired of American lies” published Oct. 17, 2002 in London’s The Guardian newspaper.

■ “I despise him [President George W. Bush]. I despise his administration and everything they stand for....There has to be a movement now to really oppose what he is proposing because it’s unconstitutional, it’s immoral and basically illegal....It is an embarrassing time to be an American. It really is. It’s humiliating.”
— Actress Jessica Lange at a September 25, 2002 press conference at an international film festival in San Sebastian, Spain where she was given a lifetime achievement award. Her remarks were shown in the U.S. on the syndicated show Inside Edition on October 4, 2002. 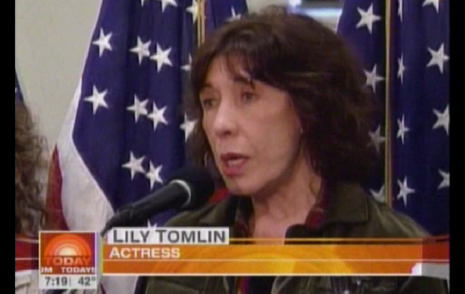 ■ “The word, ‘zoo,’ is sort of elephant-speak for Guantanamo. They’re really, they are suffering and being tortured.”
— Actress Lily Tomlin at an animal-rights protest in Los Angeles, clip shown on NBC’s Today, December 4, 2008.

■ “In my country, we seem to be sanctioning renditioning of innocent people without trial...put them in jail without telling anyone...and torture them out of suspicion of what we think they might do....This is exactly what [George] Orwell was talking about when he spoke of thought crimes.”
— Actor/left-wing activist Tim Robbins, who was in Athens, Greece, performing in a stage version of Orwell’s 1984, as quoted in a May 2, 2006 Agence-France Press dispatch.

■ “You have two choices in life, Elisabeth. Faith or fear. Faith or fear, that’s your choice....Get away from the fear. Don’t fear the terrorists. They’re mothers and fathers.”
— Rosie O’Donnell to co-host Elisabeth Hasselbeck on ABC’s The View, November 9, 2006.

■ Rapper Mos Def: “I don’t believe it was bin Laden today....”
Host Bill Maher: “You don’t think bin Laden knocked down the World Trade Center?”
Def: “Absolutely not....I don’t. You know what, I don’t....In any barbershop I am so not alone, I’m so not alone.”
Maher: “That doesn’t mean you’re right.”
Def: “That don’t mean it is not valid neither. Highly-educated people in all areas of science have spoken on the fishiness around the whole 9/11 theory....The way that this government has pursued its foreign interests has been meddlesome, murderously meddlesome.”
— HBO’s Real Time with Bill Maher, September 7, 2007.

■ Left-wing filmmaker Michael Moore: “What happened to the search for Osama bin Laden?...You don’t think they [the U.S. government] know where he is?”
Host Bob Costas (astonished): “You think they know where Osama bin Laden is and it’s hands off?”
Moore: “Absolutely, absolutely.”
Costas: “Why?”
Moore: “Because he’s funded by their friends in Saudi Arabia! He’s back living with his sponsors, his benefactors. Do you think that Osama bin Laden planned 9/11 from a cave in Afghanistan? I can’t get a cell signal from here to Queens! I mean, come on, let’s get real about this....I think the United States, I think our government knows where he is and I don’t think we’re going to be capturing him or killing him any time soon.”
— Exchange on HBO’s On the Record with Bob Costas, May 9, 2003.

■ “It is the first time in history that fire has ever melted steel. I do believe that it defies physics for the World Trade Center Tower Seven, building seven, which collapsed in on itself — it is impossible for a building to fall the way it fell without explosives being involved...World Trade Center One and Two got hit by planes. Seven, miraculously, the first time in history, steel was melted by fire. It is physically impossible.”
— Co-host Rosie O’Donnell discussing 9/11 on The View, March 29, 2007.