So far, network reporters have barely noticed the brass knuckles threat from Senate Democrats to filibuster whoever President Trump nominates for the Supreme Court, regardless of the nominee’s qualifications or ideology. But that’s not the approach they took when Republicans blocked President Obama, then a lame duck, from picking a Justice during his final months in office. 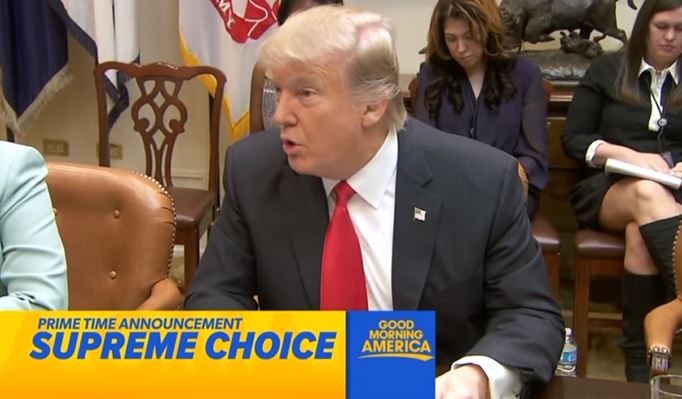 In their coverage Tuesday morning, only ABC’s Good Morning America used the F-word in their Supreme Court coverage, as co-host George Stephanopoulos briefly noted that Democrats are “already promising a filibuster” moments after correspondent Jon Karl said the confirmation battle “will look like an all-out political war.”

On CBS This Morning, correspondent Jan Crawford alluded to the filibuster threat as she noted that “Democrats are ready for a fight. They are vowing to block this nominee, just like Republicans blocked President Obama’s nominee of Merrick Garland.”

On NBC’s Today, MSNBC’s Steve Kornacki and co-host Matt Lauer fretted that Republicans had rejected Garland, who fits the Democratic definition of a “mainstream” Justice:

MATT LAUER: Chuck Schumer was here yesterday, Steve, and he said that he is, he and other Democrats are imploring the President to choose a “mainstream” justice. Does the Democrats’ version or definition of mainstream at all coincide with the Republicans’ definition?

STEVE KORNACKI: No, and I think we probably just saw the ultimate test that I mentioned. Merrick Garland was the choice of Barrack Obama last year. Republicans refused to even hold hearings and consider this. This was actually, from the Democratic standpoint, a concession to Republicans. They said, ‘look, if we had our druthers, we would probably go with somebody more to the left of Garland.’ The Obama administration, Democrats, said ‘hey, this is more of a moderate pick,’ this is their idea of mainstream. Republicans said no.

If the network reaction to the Democrats’ unprecedented threat to filibuster any nominee from a President in his first days in office has been low-key, the media were far more distressed when Republicans blocked Obama — then a lame duck with only a few months left in office — from filling Justice Scalia’s seat last year.

During his network’s live coverage mere moments after Obama announced his selection of Garland back on March 16, NBC’s Chuck Todd pronounced him the “perfect pick” to get past Republicans: “He is the perfect pick if they ever have to have one with a Republican Senate....He is putting real pressure on the Republicans to sit here and stick by this pledge that they’re somehow not going to even have a hearing....I think he made the perfect pick.”

The next morning, CBS’s Gayle King confronted GOP Senator Jeff Flake: “Are you concerned that the optics of this look very bad for your party?” 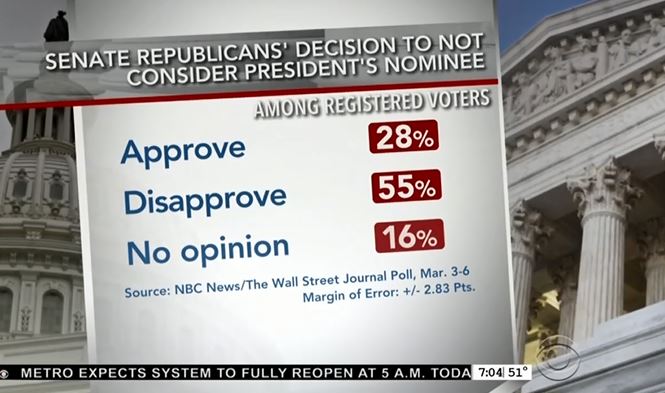 The media’s conventional wisdom was that Republicans would lose this fight. The day after Garland’s pick, Bloomberg’s With All Due Respect co-host Mark Halperin acknowledged the media’s pro-Obama bias as he suggested it would help move public opinion against the GOP: “Democrats often have the media on their side because of liberal bias. This is a case where the media believes the Democrats are doing the right thing. And I think  over time if the White House continues to perform this way, public opinion is going to shift in a way that is going to spook the Republicans.”

On cable, journalists made no secret of their feelings. The day of Garland’s selection, CNN’s Jeffrey Toobin crowned him “an extremely qualified nominee” with an “impeccable legal background,” and dismissed the GOP efforts to block him as “more about power than they are about principle.”

MSNBC’s Chris Matthews saw the rejection of Garland as Scalia’s replacement as yet another racist slight of President Obama, asking the American Urban Radio Networks’ White House correspondent April Ryan: “Do you think this is another one of those boots in the face of the president on the racial front?”

On March 29, Slate’s Dahlia Lithwick jeered that their opposition to Garland made Republicans seem like “toddlers having a tantrum next to a Snickers bar in the checkout line.” 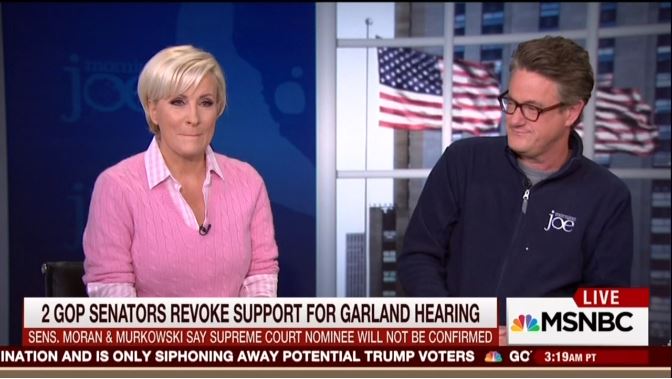 The next week, the brain trust on MSNBC’s Morning Joe deemed Republicans had been outmaneuvered by Obama. “Could they have played into President Obama’s hands any better throughout this?” co-host Willie Geist wondered.

“No. Oh, no, they couldn’t,” Joe Scarborough responded. His sidekick Mika Brzezinski inelegantly chimed in: “They just vomited all over themselves. I’m serious. Just a mess. The entire Republican party.”

By October, when it was clear that the GOP refusal to buckle was going to succeed, PBS host Tavis Smiley fulminated in an essay written for Time magazine, calling it “a travesty of justice” that, he regretted, “has all but disappeared as a news story.”

While Republicans were pounded by the media, it turns out they weren’t punished by voters, as the Democratic Senate takeover anticipated by liberal reporters failed to materialize.

Will Democrats be as seriously criticized for pledging to stand in the way of a nominee from a new President with his entire term left to serve — or will reporters once again demonstrate how their sense of outrage is dictated by the partisanship of each situation?