In the aftermath of the 25 hour long sit-in by House Democrats, where they attempted to push for a vote to attack gun rights and due process laws, Georgia Representative John Lewis appeared on CBS This Morning to discuss the issue with the show’s cast. During the interview, co-hosts Gayle King and Charlie Rose beamed with excitement and joy over the civil rights icon’s attack on your constitutionally protected rights.

CHARLIE ROSE: Congressman Lewis, Charlie Rose here. Some would look at you and say you're such a revered figure because of you being so admired for what you did in sit downs and sit-ins and also protests that you are an appropriate figure to be out there. Secondly, though, they ask if in fact you could get 200, as Speaker Ryan said, 18 votes, you could get a vote. Is that impossible to gather that number of people in order to vote on the very issue that just talked about?

JOHN LEWIS: Well on the Democratic side, we are in the minority. We can have a petition, but we need our brothers and sisters on the Republican side to be willing to speak up and speak out and join us in getting the necessary votes.

GAYLE KING: Clearly we heard your passion and frustration the other day. You said sometimes you need to turn things upside down to turn things right side up. Do you think there's not a way to find common ground here?

JOHN LEWIS: We will continue to work and search for members of the Republican Party to join us in an effort to get common sense gun legislation to pass the House and Senate.

GAYLE KING: So what happens July 5th, Congressman, when you come back? What’s going to happen

JOHN LEWIS: When we come back, we will continue to discuss certain action. And if we fail to get something done, we will act. While we were sitting there, the majority of the Democratic senators came over to support us and stood on the floor with us. 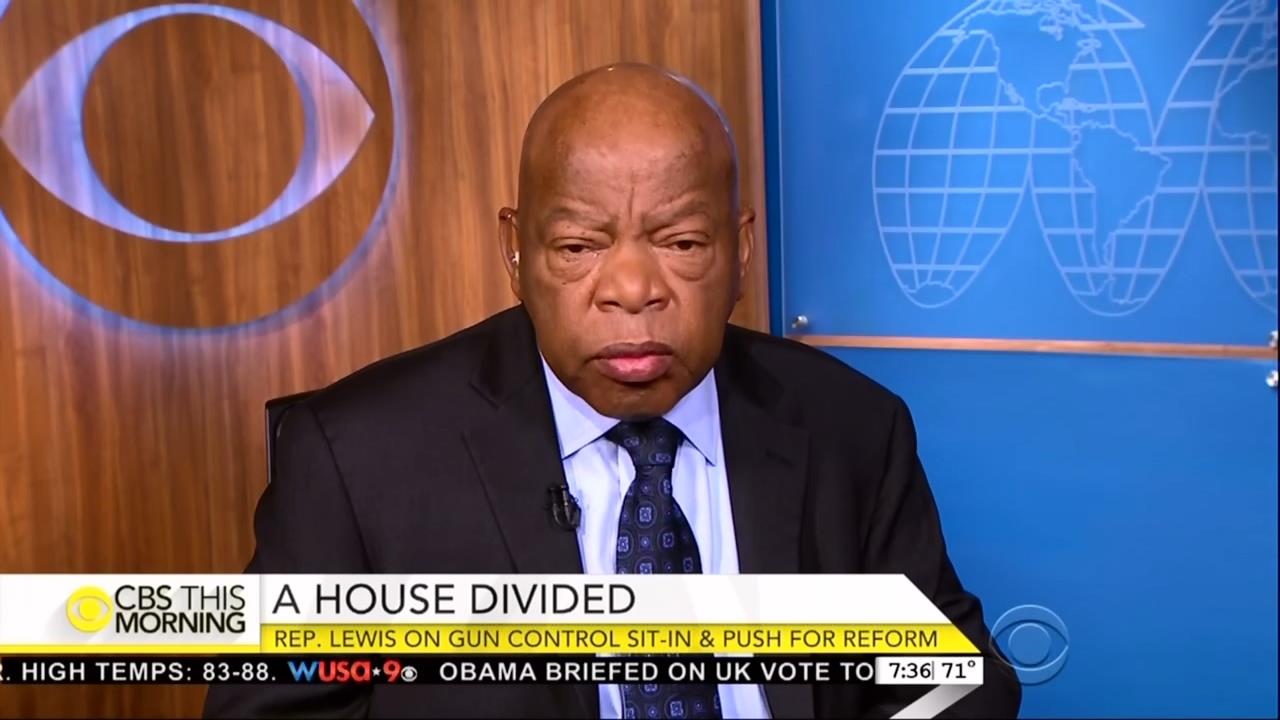 The CBS crew did ignore one critical fact during the interview with Lewis; John Lewis- who wants to take away the ability for those on a no-fly list to purchase a firearm- was in fact on a no-fly list for many years. According to the Daily Caller:

Press accounts from 2004 to 2008 reveal that Lewis’ name somehow ended up on the federal no-fly list, and remained there for years despite his best efforts to get it off. In 2004, he claimed he was stopped 35 to 40 times in a single year by airport personnel who tried to keep him from flying. Presumably, if the “no fly, no gun” law had been in place then, Lewis would have had even more trouble buying a gun than he had getting on a plane.

The House Democrat joins a long lineage of liberals on the no-fly list, ranging from the deceased Senator Ted Kennedy to celebrity singer Cat Stevens.