Meghan McCain: The Liberal Studio Audience on ‘The View’ Often Boos Me 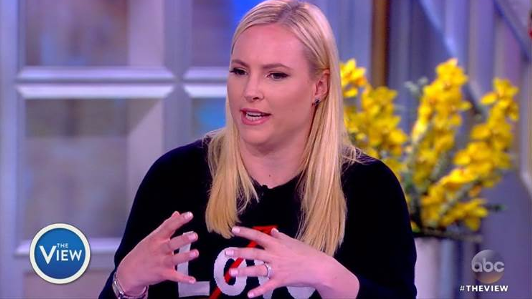 It’s not easy being the most conservative pundit on a liberal program like The View, which airs weekdays on ABC.

In an interview posted last Thursday by Carrie Battan, a contributor to Elle magazine, McCain described the set:

“The audience [of The View] boos me,”McCain says when I ask her to elaborate on feeling "controversial." "It’s a very liberal audience in the studio, and they’re very vocal. People are always looking to turn you into something [else].

McCain added: “And I will be vocal, and I will live in the moment, for better or worse” even though she said she would like to be “less reactive” to comments made by her fellow co-hosts.

Battan also noted: “Each week, a fresh wave of drama tries to knock McCain over. Occasionally, a spat with one of her more left-leaning co-hosts will go viral.”

On other weeks, “there is an uproar over something she’s said in a heated segment about immigration or abortion,” the interviewer continued.

“When there’s nothing serious to latch onto,” Battan posted angrily, “there might simply be a surge of blind frustration aimed at the good old-fashioned nepotism that helped boost McCain to her current perch, or a chorus of cackles about something she’s chosen to wear.”

During a recent appearance on ABC’s This Week With George Stephanopoulos, McCain took on the Democrats and anti-Semitism.

“When we’re having conversations about anti-Semitism, we should be looking at the most extreme on both sides,” McCain said during the segment. McCain tells me her concern over anti-Semitism intensified during the time of the Women’s March, when one of the event’s co-chairs refused to condemn Louis Farrakhan. “I would bring up Congresswoman Ilhan Omar and some of her comments that got so much attention, and in my opinion Nancy Pelosi wasn’t hard enough in her response to her trafficking in anti-Semitic language," comments that “the Jewish people had hypnotized the world” and people only cared “all about the Benjamins.”

Elle's Battan wrote "This giant leap of reasoning was more than enough to sound the 'Meghan McCain says something detestable' alarm bells."

A few hours later, the co-host was inundated with angry emails. “I wasn’t surprised” by that, McCain noted. “Bigotry is called out on my side, as it should be. The alt-right is disgusting; they’re very dangerous. But I don’t understand why someone like [Omar] should get a pass. I stand by everything I said.”

She also wrote about the combative McCain interview on Late Night with Seth Meyers about Omar. McCain said “I don’t know if [Meyers] could have gotten away with speaking to a liberal woman the way he spoke to me...I don’t think he wanted to have a conversation; I think he just wanted to lecture me."

McCain explained she has become more conservative under Trump:

“The explosion in the culture war, which has happened with the rise of Trump, has made me more conservative. No Republican is good enough for a certain group of people. All Republicans are evil to a certain segment of the media,” she says. “And you become more tribal, and more territorial of your people and what you represent. And that has certainly happened to me.”

One of the co-host’s regrets is that she said she hated Hillary Clinton on the show in 2016 and even called the Democratic presidential candidate “Crooked Hillary” before noting "I apologized on TV and said that I was contributing to the polarization of this country. I really regret saying that. She was friends with my dad. It’s really not fair."

NewsBusters reported in early July that McCain was considering leaving The View because she felt “like a caged animal” after almost two years of getting into constant charged confrontations with her liberal co-hosts. However, that didn’t happen. “I’m innately a fighter, but I do question if there will be a certain time where it just won’t be worth being a Republican woman being screamed at all day,” she says.

For now, she's taking the heat and trying to provide some sense of balance on the "hot topics."