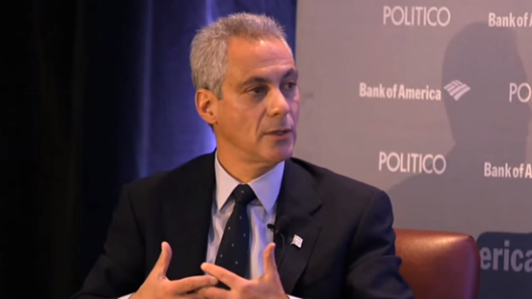 Another liberal politician who worked for the Obama administration is joining the media, this time ABC. Just hours after Democrat Rahm Emanuel stepped down on Monday, the 55th mayor of Chicago was quickly snapped up as a contributing editor and columnist for the liberal Atlantic magazine and by ABC News as an on-air contributor.

According to an article posted on Tuesday, Oliver Darcy -- the senior media reporter for CNN Business -- swooned as he stated that the former mayor “may no longer be serving in public office, but he'll still be in the public eye.”

Emanuel has a long career in Democratic politics.

He served as President Barack Obama's first White House chief of staff and, prior to that, chaired the House Democratic Caucus and Democratic Congressional Campaign Committee.

On Tuesday, The Atlantic -- which described itself as the “primary home” of Emanuel’s writing -- posted his first column, which was entitled: “It’s Time to Hold American Elites Accountable for Their Abuses.” If you hoped that serving for several years as the top official in a very large city had broadened his horizons, you would be dead wrong. Emanuel defined “the elite” as wealthy, conservative Republicans.

He also called the 2016 election a “disaster” because “Hillary Clinton drew more votes, but she was 1,000 times as qualified and 10,000 times as personally appealing. She should have demolished him -- but something drew many voters to Trump instead.”

The “toxic”  President “was a perfect example of elite privilege,” the former mayor added, but “Trump embodied the country’s desire to hit back.”

The White House picks fights on immigration because the issue paints Democrats as champions of constituencies that aren’t following the rules.

Democrats need to focus their energy on convincing the middle class that they share their values more than just their economic interests.

NewsBusters reported in late February that Emanuel was a guest on MSNBC’s weekday Morning Joe program, and co-host Mika Brzezinski promised to ask the mayor about the hoax perpetrated by actor Jussie Smollett since the incident took place in his hometown.

However, neither Brzezinski nor co-host Joe Scarborough followed through on that promise, instead discussing the “successes” in their Democratic ally’s terms in office. The reason for that change was never revealed.

Can we hope that the lifelong Democrat will eventually give the GOP an even break? Definitely not. Will he be critical of his fellow liberals when they go astray? No way.

In 2014, the MRC’s Brent Baker tallied all the former Obama officials who made the switch to journalism. (Emanuel was the chief of staff for the Obama White House.) As of February 24, 2014, it was 30.