$$$ for 'Empathy': Obamas Sign Deal with Netflix to Produce Their Kind of Movies and TV 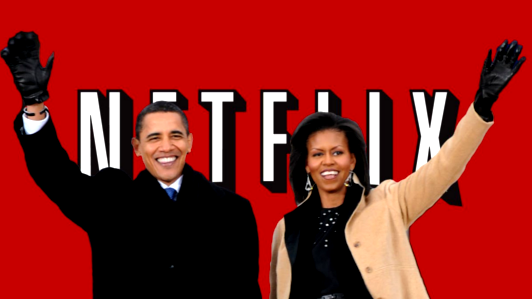 Of course, the Monday announcement came as no surprise to anyone familiar with the connection between the pay-cable channel and the former Democratic occupants of the White House, along with Obama Administration officials and entertainment executives who have supported the family in the past.

According to an article by Michelle Castillo, a reporter for CNBC Digital, the former first couple hopes “to promote greater empathy and understanding between peoples, and help them share their stories with the entire world.”

In a statement also released on Monday, the former president said:

One of the simple joys of our time in public service was getting to meet so many fascinating people from all walks of life, and to help them share their experiences with a wider audience. That's why Michelle and I are so excited to partner with Netflix.

{W]e hope to cultivate and curate the talented, inspiring, creative voices who are able to promote greater empathy and understanding between peoples and help them share their stories with the entire world.

Also commenting on the new deal was Netflix Chief Content Officer Ted Sarandos, who asserted that the Obamas “are uniquely positioned to discover and highlight stories of people who make a difference in their communities and strive to change the world for the better."

Castillo quoted from a March 8 article in the New York Times, where the former president was described as being “in advanced negotiations” for “a series of high-profile shows that will provide him a global platform after his departure from the White House.”

In addition, the “exclusive content” would be available “only on the streaming service, which has nearly 118 million subscribers around the world.”

The CNBC reporter also noted that “Obama's projects are not intended to address President Donald Trump or conservatives. Instead, it would focus on inspirational content.”

As NewsBusters previously reported, this is not the first time the liberal Democrat has been connected to that pay-cable network.

Netflix aired a movie in December entitled Barry, which portrayed Obama as young and charming while claiming he struggled “to fit in at his college and his off-campus life as a biracial transfer student” during his years at Columbia University in the 1980s.

The trailer for the film stated: “Before he gave hope, before he created change, before he made us believe ‘we can,’ he was Barry.” Of course, liberal critics claimed the movie was “terrific.”

One month later, Obama was the first guest of former CBS Late Show host David Letterman in his new Netflix series My Next Guest Needs No Introduction.

During the hour-long interview, the 70-year-old comedian told Obama that he was “the first president I truly and fully respect” and described the “palpable sadness” Letterman felt at the end of the liberal Democrat’s presidency.

In fact, Letterman told jokes and often behaved as if his guest was still living in the White House.

Obama isn’t the only member of his administration to be connected to Netflix. In late March, the company named scandal-plagued former national security advisor Susan Rice to its board of directors.

“We are delighted to welcome Ambassador Rice to the Netflix board,” Hastings noted in a statement at the time. “For decades, she has tackled difficult, complex global issues with intelligence, integrity and insight, and we look forward to benefiting from her experience and wisdom.”

Of course, Rice is best known for her misleading comments in the hours immediately following a 2012 terrorist attack on U.S. personnel in Benghazi, Libya. The former U.N. ambassador went on several television shows after the attack and falsely stated that the impetus of the attack was an incendiary YouTube video.

As if that wasn’t enough, Sarandos and his wife, former U.S. Ambassador to the Bahamas Nicole Avant, were identified as a “power couple” for Obama’s re-election campaign after raising $500,000 in one night.

In an article posted on The Hollywood Reporter website on April 25, 2012, Sarandos and Avant are said to have opened their Beverly Hills home to a gathering of “Hollywood power players,” which led to them making the top tier of Obama’s bundlers.

Of course, Sarandos failed to mention that fact on Monday while praising the Obamas’ deal with the pay-cable company.

The concept of “having friends in high places” is apparently a good thing if you’ve been a high-ranking official in the Democratic Party. Is it any wonder why conservatives have their doubts about the programming on Netflix?