Colbert: Trump Should Leave By Political Means, Not ‘Extreme’ Measures 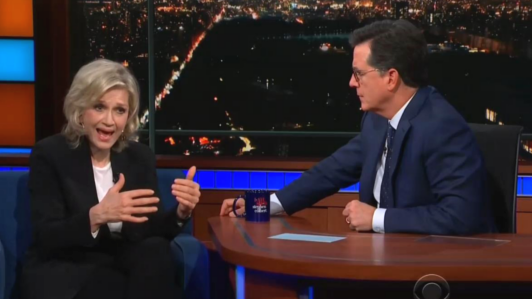 During Thursday night’s edition of The Late Show With Stephen Colbert on CBS, the liberal host made a surprising comment about how he believes Donald Trump should leave the White House.

While interviewing guest Diane Sawyer, who had interviewed the GOP occupant of the White House back in 1999, Colbert concluded:

We have a president now who is under investigation. Some people are calling for his impeachment.

I don't actually think that's that great of an idea because I think that if Donald Trump should leave office, it should be through political means, not necessarily through judicial or extreme constitutional remedies.

“This isn’t the first division in my lifetime,” he stated. “I remember the Nixon administration. I remember Watergate.”

The host began his interview of the former ABC World News anchor by noting: “You’ve been in the news for so many years. Give me a little bit of perspective here because I pretended to be in the news for years. But you’re actually are the real thing, a respected journalist.”

“Is there more news now, or does it just feel like there's more news now?” he asked. “Or is it the same amount, and it’s gotten thicker and harder to chew?”

The journalist continued: “There’s so much of it, so many venues. It’s incessant.”

“You know,” she added, “I think some psychologists have told us -- in another piece I’m working on -- that there is a condition they’re looking at which is feeling inadequate because somebody knew an alert three seconds before you knew the alert in the room.”

“How much more can we do this?” Sawyer asked. “How much faster can we go?”

Colbert then stated: “I’ve got it right here. The old watch is telling me I've actually been on the stage before, and my watch has gone off and I'm, like, why didn't I make a joke about that?”

“We're like hamsters hitting the pedal to get another pellet,” the liberal host continued.

“Are we smarter?” Sawyer inquired.

The host then noted that his guest interviewed Trump in 1999, during “his first flirtation with running for president. What was he like then? Has he changed, or have we changed?”

“Good question,” she replied before noting that the president “was amazingly consistent about China and the trade war” over the years.

“So tariffs back then, too?” Colbert asked.

Sawyer then said that Trump called events in the political arena “stunts that you do in campaigning,” but he stated: “They energize me, and people want me energized, so that’s why I do them.”

“He told us a lot about who he was and how he campaigned,” she noted.

“And back then no one took him seriously,” the liberal host responded.

“Well, we’ve changed. We certainly have changed,” Sawyer replied. “I mean, we’ve seen the undertow that is pulling us apart.”

“I’m from Kentucky,” and “in my family alone, there are so many opinions on every single issue,” she continued. “We’re tough, and yet we have such trouble even just addressing what each other’s feeling.”

The guest then added: “After all this time in this moment, we’ve got to think of something different because it’s not working. “We’re not talking to each other in a way that actually is making us illuminated about each other and how we got here.”

At that point, Colbert noted: “This isn’t the first division in my lifetime. I remember the Nixon administration. I remember Watergate.”

“We have a president now who is under investigation,” he added. “Some people are calling for his impeachment.”

“I don't actually think that's that great of an idea because I think that if Donald Trump should leave office, it should be through political means,” Colbert continued, “not necessarily through judicial or extreme constitutional remedies.”

Perhaps Colbert believes that Trump can’t be re-elected during the 2020 election. As someone who hammers the president every chance he gets, the liberal comedian might indeed think that. Still, with that contest more than two years in the future, things might happen that could change his mind long before then.