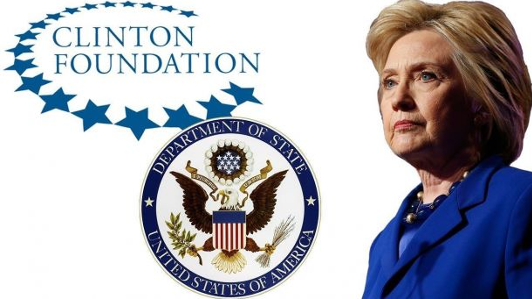 During this week's episode of Political Gabfest – a “political-commentary podcast” produced by the far-left culture magazine Salon -- a pro-Hillary guest surprisingly unleashed a several-minute-long criticism of the Clinton Foundation and its “performance” regarding public charities.

Adam Davidson, a contributing writer at The New Yorker magazine, stated that “there is a real creepy vibe to me” at the Foundation and asserted that the organization is “all about buying access” to Bill and Hillary Clinton by powerful people.

In an article on the Independent Journal Review website written by Kelsey Rupp, Davidson began his part of the discussion by stating: “I’ve spent a decent amount of time at the Clinton Global Initiative,” and “I sort of fell into this thing, which -- what I’m about to say means I’m probably going to fall out of this thing.”

It seems to me that it is all about buying access. It is incredibly expensive just to go to the thing, … and there are sort of these explicit ways in which you get access.

You pay more money to get more access to political leaders and to really rich people and to big corporate leaders.

“There’s this kinda creepy theater that happens where you have the CEO of Coca-Cola or IBM or whatever or GE up there with President Clinton,” Davidson noted, “and they’re just bathing each other in love over how generous and wonderful they are and how much they care about the world and all these earnest people applauding and thrilled.”

To hear Davidson give his take on the organization’s work, begin listening at the 24:55 minute mark in the audio below.

Even their charitable work is mediocre, Davidson commented.

The writer, who has “spent a lot of time reporting in Haiti” and “often moderates the organization’s annual Haiti panel and attends its sessions and events,” came down hard on the Foundation's work in that country.

“I have seen their work in Haiti up close in person,” he stated. “There are some very good people who work there, but they are -- Haiti is one of their singular focuses. It is a very small country. They have not had a major impact on Haiti.”

“It’s more the performance of very public charity, not the actual intervention in deep and meaningful ways,” Davidson noted.

Celebrities, the writer suggested, come with the price of admission:

And then every hour or so, they parade -- Angelina Jolie is hustled through a room and she doesn’t stop to talk to anyone or hang out, but you get to say that you were with Angelina Jolie that morning.

It just feels like the worst version of an elite selling access to the aspirational, creating this theater of doing good, but it’s all about something else. It really feels gross.

Later in the podcast, Davidson distinguished between the Clinton Foundation -- which aims to connect donors and advise them on how to best spend their resources -- and the Clinton Global Initiative, an arm of the foundation that is an annual conference of world leaders and “influencers.”

“Davidson moderated panels for the Clinton Global Initiative and its organizers,” Rupp said, and those people “would really want a good event. … They wanted a good hour of conversation where people disagree.”

But the Clinton Foundation is, by contrast:

Just a bunch of people congratulating each other on how awesome they are.

And here’s a head of state of a foreign government who needs to be on that panel even though they literally have nothing to say but we promised him a slot.

GOP presidential candidate Donald Trump has suggested that the Foundation is a “pay-to-play” front that enables the Clintons to trade government access and favors for money, Detrow noted.

"It's impossible to figure out where the Clinton Foundation ends and the State Department begins," Trump said on Tuesday night. The Clintons "sold access and specific actions by and to them for money."

However, Bill and Hillary Clinton have defended the foundation's work. "We're trying to do good things," Bill Clinton said on Wednesday. "If there's something wrong with creating jobs and saving lives, I don't know what it is.”

But, Rupp asked: “Does any of this change Davidson’s opinion about Clinton?”

“Obviously, I fully support Hillary Clinton,” he said after calling the Democratic presidential nominee “gross” on the issue of “rent-seeking,” the economic term for when a company or individual lobbies a government for special benefits.

“I can’t wait to vote for her,” Davidson stated. “If I had time, I’d go move to Missouri or Ohio or somewhere so my vote could actually count.”