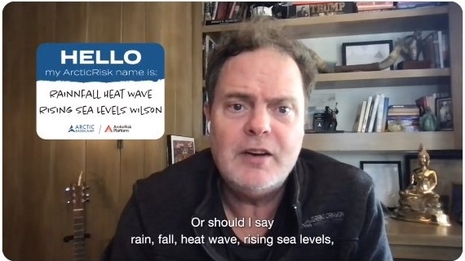 Hollywood actor Rainn Wilson, who memorably played Dwight Schrute on The Office, came up with a dopey idea to virtue signal his concern over global warming. He changed his name (sort of) to Rainnfall Heat Wave Rising Sea Levels Wilson. Well, not really. His legal name remains the same but his new virtue signal name is basically a virtual name for use on the web.

In a saner era, this would just be written off as a silly publicity stunt. However, in this time where the news media will latch on to anything that advances the causes it is promoting, Wilson's name change is taken seriously as you can read in the Friday story by Lisa Respers France, "Rainn Wilson announces name change to raise climate change awareness."

Rainn Wilson has “changed” his name and is inviting others to do the same.

Rainn Wilson has “changed” his name and is inviting others to do the same.

...Wilson encouraged his followers to visit environmental advocacy group Arctic Basecamp’s “Arctic Name Changer” to get their own names to be used on their social media profiles in the hopes of capturing the attention of the world leaders assembling in Egypt for the COP27 international climate change conference.

Join me @ @ArcticBasecamp in bringing attention to the melting issue. We need world leaders to take action at COP 27!
The Arctic is melting at Millions of Liters per second, yet this problem can’t seem to make a name for itself, so we’ll make a name for it.
Go to link in bio ⬆️ pic.twitter.com/TgEG84fOmQ

He announced the new-name shtick, laughed, and then said "Sorry to get so dark, so quick." Then he claimed, "I'm an Arctic risk name changer, which is going to be a game changer." He floated other possible name changes, such as "Jack Black Carbon Is Killing Us" and "Amy Poehler Bears Are Endangered."

It isn't just CNN hyping this silliness. Other media outlets such as Forbes, Newsweek, Yahoo, and MSN among others also eagerly jumped onto this hype bandwagon.

Rainn Wilson is lucky he picked a name popular with the virtue signalers. If he had changed his name to "Free Speech Wilson" he would have been denounced by much of the media as promoting hate speech.