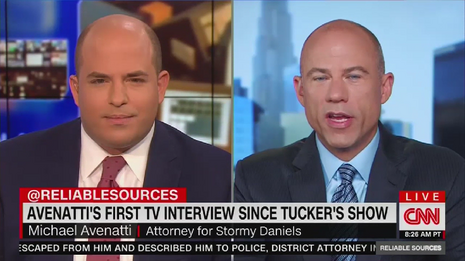 Something seemed to be oddly missing in the CNN report by Kara Scannell on Thursday, "Michael Avenatti sentenced to 4 years for stealing nearly $300K from Stormy Daniels."

Here is some of the report which revealed just what a sleazebag lawyer Michael Avenatti was. Now CNN calls him "disgraced":

District Judge Jesse Furman said Avenatti's conduct was "so brazen and egregious" adding, he "took advantage of a vulnerable victim given her unorthodox career and somewhat unorthodox beliefs."

Avenatti is currently serving a 30-month prison sentence for attempting to extort over $20 million from Nike by threatening to go public with damaging information unless they paid him. He goes on trial next month in California on charges alleging that he embezzled $10 million in settlement funds from at least five clients. He has also been charged with tax fraud and bankruptcy fraud and pleaded not guilty to the charges.

Conveniently missing from the report is just how much CNN and other cable outlets such as MSNBC were in bed with Avenatti by hyping him as perhaps no other guest in the history of television. In fact, during a one year period, Avenatti made a grand total of 254 appearances, with CNN leading the pack at 122 guest spots.

The hosts continually fawned over him to the extent that they shoved renowned lawyer Alan Dershowitz out the door. So why would CNN ditch the highly respected Dershowitz for Avenatti? Dershowitz himself gave the best explanation:

He promised us that Trump would be out of office soon and that his lawsuit would be the downfall of Trump. And all of that, he was proved wrong on every occasion. I really think the networks have to be held accountable for their predictions. I would love to see on your show or other shows just systematically, showing with what the pundits on the networks predicted and how they came true or not true so we can evaluate the credibility of various pundit.

It is hard to exaggerate just how much CNN was in awe of the corrupt lawyer they were promoting but this clip of "Reliable Sources" host Brian Stelter reveals that CNN's adoration Avenatti extended even to the point of suggesting he should be taken seriously as a contender for president in 2020 because of his "presence on cable news."