CNN's Cillizza On Ukraine: 'Is This the Beginning of a Joe Biden Comeback?' 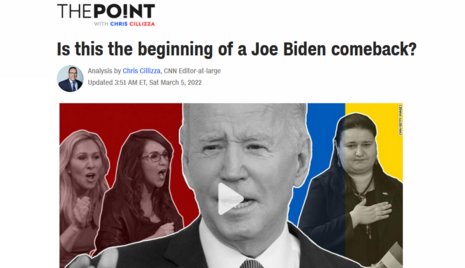 When a normal person watches the unfolding tragedy of the Russian invasion of Ukraine, he would be struck with a number of thoughts such as the terrible destruction of war, the tragedy of the refugees fleeing the fighting, and the sad loss of human life. However, CNN's Chris Cillizza thoughts on the same situation seem to center around... Joe Biden's poll numbers. Cillizza expressed his deep concern in which the war in Ukraine only played a side note on Saturday in "Is this the beginning of a Joe Biden comeback?"

Cillizza starts out with a sense of deep concern over how rough it has been for...Joe Biden:

It's been a rough month -- and, really, year -- for President Joe Biden.

Beset by the Omicron variant, high inflation and the uncertainty in Ukraine, Biden's poll numbers have lagged badly, with his approval ratings stuck in the low 40s.

Some of that positive movement can be attributed to Biden's State of the Union speech earlier this week. It was generally well-received, and anytime a president has the bully pulpit for an hour in prime time, it's usually a good thing for him.

But there are several other threads beyond a temporary State of the Union bump that suggest a Biden comeback could be in the works.

1) His handling of the Ukraine situation -- leading an international coalition against Russia and imposing harsh economic sanctions all while refusing to commit American military forces -- has won him positive reviews from Democrats and Republicans.

Cillizza concludes by coming to "The Point" in which his hopes and dreams revolves around Biden's poll numbers:

The Point: Democrats on the ballot this November have to hope this represents a real turning point for Biden and not just a false positive. If his numbers remain anywhere close to the low 40s, the 2022 election is going to be a wipeout for his party.

Psst! Chris! Could you at least pretend to care a bit about the unfolding tragic events in Ukraine without focusing on its effects upon Biden's poll numbers?