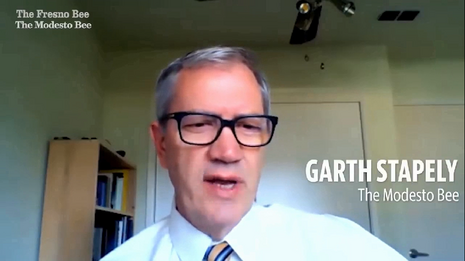 The Modesto Bee editor is very very upset that the leading Democrat candidate in the California recall race is treating the governor he wants to replace, Gavin Newsom, with "disdain" and has "disrespected" him.  The editor in question is Garth Stapley who had apparently no problem revealing his clear bias in favor of Newsom  while questioning Democrat Kevin Paffrath, a real estate developer and YouTube star.

One can only imagine how much more hurt Stapley's feelings were after hearing Paffrath's harsh assessment of Newsom during the Sacramento Bee editorial board interview of him on Tuesday.

Stapley led off by questioning why Paffrath was so nasty towards dearest Gavin Newsom. "I guess I struggle a bit with the idea that you have shown a lot of disdain for the governor who really is the leader of the Democratic party in California and how you expect to win over people when you disrespected their leader."

If Stapley expected some sort of apologetic attitude from Paffrath, he would have been horribly wrong since Paffrath had no problem showing both utter disdain and disrespect for his fellow Democrat that he is hoping to replace in the recall election:

I don’t think anybody really respects Gavin Newsom. They have to play along to not get their head chopped off. But once the problem goes away, I think there will be a weight be lifted off a lot of folks shoulders and we'll actually be able to make big change happen. And look, I know that is very critical of Governor Newsom but I can't stand somebody who is willing to lie to Californians and then try to cover it up. And it's not just once but many times.

After providing a litany of Newsom's lies, Paffrath went on to disturb Stapley even more by giving examples of Newsom's corruption as well.

Exit question: Although it is more than obvious that Stapley will vote "NO" on the recall, will he also follow Newsom's advice to ignore the second section of the recall and not vote for a replacement candidate?