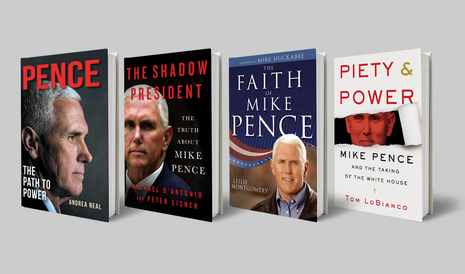 And in the latest episode of cancelling culture by cancelling publication we have the spectacle of Simon & Schuster employees petitioning for the company they work for to stop publication of Mike Pence's memoir which is due out on book shelves in 2023. This latest iteration of the increasingly authoritarian mentality of the left was captured on Wednesday in the New York Post, "Simon & Schuster will publish Mike Pence’s memoir despite staff objections."

Simon & Schuster says it will publish former Vice President Mike Pence’s memoir despite objections from employees who signed petitions demanding the company not sign book deals with former Trump administration officials, according to a report.

CEO Jonathan Karp sent a reply to employee demands: “As a publisher in this polarized era, we have experienced outrage from both sides of the political divide and from different constituencies and groups. But we come to work each day to publish, not cancel, which is the most extreme decision a publisher can make, and one that runs counter to the very core of our mission to publish a diversity of voices and perspectives.”

The Post noted the publisher just nixed a distribution deal for a book authored by John Mattingly, one of the cops involved in the killing of Breonna Taylor in Kentucky. They didn't note Simon & Schuster canceled a book deal with Sen. John Hawley on The Tyranny of Big Tech two days after the Capitol riot. That book will be published by Regnery on May 4.

A cancel publication petition from the employees can be found online with the typical leftist whining:

The events of the past week have affirmed that Simon & Schuster has chosen complicity in perpetuating white supremacy by publishing Mike Pence and continuing to distribute books for Post Hill Press, including predator Matt Gaetz’s FIREBRAND.

By choosing to publish Mike Pence, Simon & Schuster is generating wealth for a central figure of a presidency that unequivocally advocated for racism, sexism, homophobia, transphobia, anti-Blackness, xenophobia, misogyny, ableism, islamophobia, antisemitism, and violence. This is not a difference of opinions; this is legitimizing bigotry.

Long before his Vice Presidency, Mike Pence made a career out of discriminating against marginalized groups and denying resources to BIPOC and LGBTQA+ communities. From advocating for legalized discrimination against LGBTQ+ people, to eroding the teaching of science in favor of Christian theology in public-funded schools, to ending energy efficiency programs, to pushing for guns to be in schools and cars, to taking away funding for and shutting down clinics treating HIV patients, to promoting conversion therapy, to denying bodily autonomy to pregnant people, to abandoning a nation in crisis as the coronavirus ran rampant and killed more than half a million Americans. Mike Pence has literal and figurative blood on his hands. We demand you cancel Mike Pence’s book deal.

Hopefully Karp will stick to his word and not give in to the growing workforce/wokeforce censorship.