Slate Irked That Nikki Haley's Instagram Shows Her Having Fun 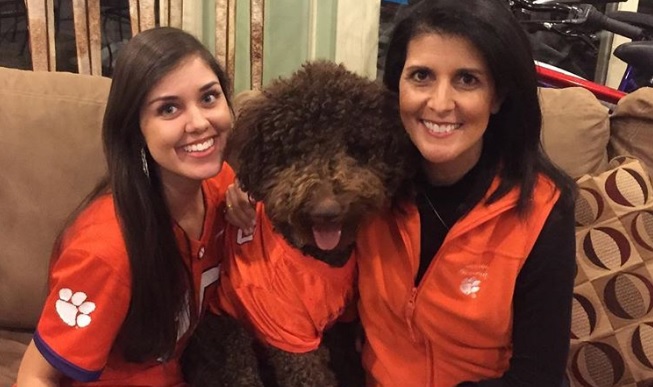 How dare any member of the Trump Administration have fun!

Such was the attitude of Rob Dozier writing in Slate magazine. He seemed upset that not only was United Nations Ambassador Nikki Haley  having way too much fun in her Instagram account but that even her pet Labradoodle, Ambassador Bentley, was also enjoying himself in his own Instagram.

Dozier's angst over the Instagram happiness of Haley and Ambassador Bentley came pouring out on June 29 in Nikki Haley’s Instagram Is a Weird Window Into the Life of a Woman Who Wants You to Know She Has It All:

... Ambassador Bentley, the stately, chocolate-brown labradoodle who only has a measly 2,000 followers, doesn’t seem too remarkable.

But he’s not just any normal Instagram pup whose owners are vying for internet fame (nor is he actually an ambassador to any sort of dog council). Bentley belongs to one of the most powerful women in our government, and the face of the country’s foreign diplomacy, real U.N. ambassador, and former governor of South Carolina, Nikki Haley.

Don't worry about the popularity of Ambassador Bentley, Rob. Your griping about him will only make his fame grow and grow and grow.

The fact that Haley would make an Instagram account, presumably run by herself and her family, for her labradoodle in February 2017, a month after being confirmed as ambassador, and continue to maintain it throughout her tenure at the U.N. underscores exactly what makes Nikki Haley so interesting and frustrating as a public figure. She’s an extremely charming and politically savvy woman—the first woman and person of color to hold the governor’s office in South Carolina, a trailblazer in her own right—who also happens to be serving a critical role in an administration that is changing American foreign policy dramatically. Her double Instagrams—her own and her dog’s—deliver consistently cheerful messaging that obviates the impact of her political actions but also largely just raise the question: Where does Nikki Haley find the time?

Perhaps those cheerful messages are in reality a cover for secret signals to the Kremlin. How do we know that Ambassador Bentley did not collude with the Russians? I say it is time for Robert Mueller to indict Ambassador Bentley!

On Bentley’s most recent post, from two weeks ago, where he’s looking especially handsome, the first comment is from Haley, who comments on almost all of his posts. “Bent! I love this pic of you,” she wrote. As ambassador, Haley (not Bentley), is probably the only one in recent memory to be a household name, partially owed to her time as South Carolina’s governor. And she’s one of only a handful of Trump’s Cabinet members that maintains a personal Instagram account, hers by far being more personal than her colleagues’. In one recent post, she details all the food her daughter ate to celebrate her 20th birthday. “She started her morning with a Strawberry Cheesecake Cinnamon Roll and ended her day with pasta and chocolate cake!” wrote Haley. “#HappyBirthdayRena #ICantBelieveWeHaveA20YearOld #CinnamonRollDeli #IlGiorgino #CaloriesDontCountAt20.” And she posts pictures of all the weddings she goes to, which is a lot, at least three in the past two months.

For every post about her family and friends, there are clips of her from the floor of the U.N. discussing policy and diplomacy. But the starkness of the two can be jarring. Her feed can be like watching a game of ping-pong. In one post she’s sharing a smooch with Bentley or celebrating her parent’s anniversary, and the next is a clip of her on the floor the U.N. strong-arming anyone who’s critical of the decision to move the U.S. Embassy in Israel to Jerusalem. The same day she announced that the U.S. would be leaving the U.N.’s Human Rights Council, she posted a picture to express how excited she was for her friend’s upcoming wedding.

Would you prefer if she posted pics of Ambassador Bentley on the floor of the General Assembly shmoozing with U.N. diplomats?

She’s careful not to make any gaffes or missteps, each of her appearances on the floor of the U.N. closely scripted. She doesn’t comment on any domestic matters outside of her purview. In the past two weeks, while the country has been reacting to the separation of immigrant children from their families, Haley celebrated her son receiving his driver’s license, and went to yet another friend’s wedding.

I'm sorry, Mr. Dozier, but Ambassador Bentley has no comment about the next nominee for Supreme Court justice.

Is it wrong for a woman with one of the most stressful jobs in the world to maintain a healthy balance with her personal life? Of course not. But as someone with some level of access and influence on the president, and who acts as an arm of his agenda on the world stage, is her squeaky clean image a little upsetting? Absolutely. Bentley seems to be her greatest trick in getting us to believe that she’s just a normal wife and mom, with a normal job and a normal dog.

Ambassador Bentley intends to send you a diplomatic note of protest for daring to describe him as being merely normal.