Trump v. Liberal Media: When Is it Okay to Criticize a Court Ruling?

Since the U.S. Supreme Court voted to overturn Roe v. Wade on June 24, 2022, the liberal media have been clutching their pearls to powder while opining that “Trump judges” are destroying the Court’s credibility.

The liberal media often question the legitimacy of the highest court in the land over rulings they dislike. But just a few years ago, they accused former President Trump of “assaulting institutions” when he would criticize courts for ruling against his policy initiatives. A double standard if ever there was one.

Take NBC political director Chuck Todd for example. In the fall of 2018, he praised Chief Justice John Roberts for rebuking Trump on the idea of “Obama judges.”

“Roberts defended an independent judiciary,” he once touted. And at one point suggested Trump’s goal was to “undermine the legitimacy of the judiciary.”

But now he claims “this is a rigged court."

And CNN legal analyst and Roberts biographer Joan Biskupic recently criticized “the three Trump judges and two different Bush judges in this majority here.” Meanwhile, she too praised Roberts for rebuking Trump’s labels back in 2019. 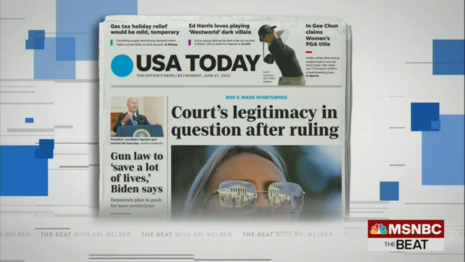 In March of 2017, MSNBC’s Joe Scarborough bloviated: “Hopefully Donald Trump will have the discipline to let the court system play out the way the court system is supposed to play out ... instead of being an idiot and questioning the legitimacy of judges.”

But in the wake of Roe’s demise, his stance abruptly changed: “We’ve heard for quite some time that expanding the court would undermine the credibility of the Supreme Court. The Supreme Court has done that already.”

So, the so-called “fourth estate” forbid Trump from criticizing rulings but gives themselves the privilege to undermine and question the legitimacy of the Court.