Tapper Admits Rebekah Jones Is a Fraud, Fails to Apologize for Elevating Her 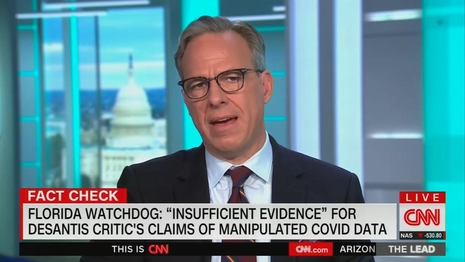 On Monday’s The Lead, host Jake Tapper was the first on CNN to admit that former Florida Health Department website operator Rebekah Jones was found to have fabricated her claims that state officials with ties to Republican Governor Ron DeSantis pressured her to manipulate COVID data, according to an investigation by the Health Department’s inspector general. But even with this revelation, Tapper failed to apologize for how he and the “facts first” network helped to elevate the lies and disinformation.

“In our health lead now, ‘insufficient evidence,’ that's what a new inspector general report says it found in response to Rebekah Jones' accusations she was asked to falsify COVID data on Florida's dashboard,” Tapper announced before handing the actual reporting to national correspondent Kristen Holmes; instead of going off on one of his infamous, self-righteous diatribes.

“Explosive claims from a prominent critic of Florida Governor Ron DeSantis were, quote, ‘unsubstantiated’ and ‘unfounded,’ according to an internal state investigation,” Holmes informed viewers.

Adding: “Now, in a 27-page report obtained by CNN and first reported by NBC News, the Florida Department of Health's Office of the Inspector General says it found insufficient or no evidence to back up most of Jones' claims, after interviews with over a dozen witnesses.”

It’s been over two weeks since NBC first reported the investigation’s findings and CNN was only just reporting it on-air.

But as NewsBusters has reported in the past, CNN was one of the major liberal outlets that made sure to help promote Jones’s falsehoods. And in the Monday report, they used clips of her appearances with now-fired CNN host Chris “Fredo” Cuomo (Jones’s biggest supporter on the network), although they didn’t show any images of him.

Back on December 8, 2020, Tapper ran a report about Jones’s home getting raided by state police because she illegally accessed a state government communication platform after she was fired. Tapper played up Jones’s claims about the raid and her original claims of being pressured to manipulate COVID data:

This video tops our national lead. It's a video from the home of Florida's former COVID data scientist as her house was raided by police. Rebekah Jones was fired in May for insubordination. She accused Florida's government of covering up just how bad the pandemic really was in Florida.

Now, she claims the raid was retaliation from the governor, Ron DeSantis, as CNN's Drew Griffin reports.

TAPPER: In our politics lead, a race to watch in next year's midterm elections, Florida's first congressional district. It's right there. Among the Alabama border. It has been solidly red since 1992. Republican Congressman Matt Gaetz holds a seat. He is, of course, now facing potential legal troubles and a challenger who made her name defying the law herself, Rebekah Jones, the data scientist fired in the scandal over COVID case numbers from Florida's Health Department.

Jones became something of a darling to critics of Florida Republican Governor Ron DeSantis. You might recall her dramatic arrest last December or her stint in jail in January.

FOREMAN, CNN CORRESPONDENT (voice-over): Cruel, corrupt, and criminal, just some of the names being flung at Florida Governor Ron DeSantis and Republican Congressman Matt Gaetz by Rebekah Jones, who is running to take Gaetz's seat.

They also played a sympathetic soundbite of Jones claiming “All I've ever wanted to do was help people.”

According to a Nexis search, Jones had conspicuously fallen off the radar on CNN up until that point after she was credibly arrested.

This refusal to apologize for gaslighting the country was made possible because of a lucrative sponsorship from TD Ameritrade. Their contact information is linked.

JAKE TAPPER: In our health lead now, insufficient evidence, that's what a new inspector general report says it found in response to Rebekah Jones' accusations she was asked to falsify COVID data on Florida's dashboard.

CNN's Kristen Holmes dives into Jones' charges. Jones' charges garnered coverage that led her to become a progressive-cause celebrity, despite claims experts saw now do not stand up to scrutiny.

KRISTEN HOLMES: Explosive claims from a prominent critic of Florida Governor Ron DeSantis were, quote, “unsubstantiated and unfounded,” according to an internal state investigation.

Rebekah Jones, who helped build the state's coronavirus data dashboard, gained fame after claiming Health Department officials in the DeSantis administration were asking her to manipulate data to minimize the scale of the COVID outbreak as the governor was pushing to reopen businesses.

JONES: When I brought basically what the results of whether or not each county could open to superiors, they essentially told me they did not like the results.

Now, in a 27-page report obtained by CNN and first reported by NBC News, the Florida Department of Health's Office of the Inspector General says it found insufficient or no evidence to back up most of Jones' claims, after interviews with over a dozen witnesses.

In a rebuttal to the findings, Jones and her attorney argue the inspector general has a misunderstanding of her complaints.

In July of 2020, Jones filed a whistleblower complaint after being fired for what officials say was in-subordination. Jones alleging it was retaliation for not altering the numbers to favor reopening the state, a claim officials deny.

GOV. RON DESANTIS (R): She was putting data on the portal which the scientists didn't believe was valid data. So, she didn't listen to the people who are her superiors.

HOLMES: Jones later launched her own online dashboard of Florida coronavirus data, and later that year --

JONES: Do not point that gun at my children.

HOLMES: Over a text message sent through the Department of Health's internal system after she had been fired, urging others to speak out over alleged COVID denialism.

According to the search warrant obtained by CNN, investigators traced the IP address of the messaging to Jones' house.

JONES: This is just a very thinly veiled attempt of the governor to intimidate scientists.

HOLMES: In January 2021, she was charged with computer-related offenses. She pleaded not guilty.

A Democrat formerly appointed by DeSantis to handle the state's emergency response has said Jones was spreading disinformation to her hundreds of thousands of Twitter followers. Twitter has suspended her account.

This week, a Florida state audit report finding the state's ability to accurately report COVID data at the beginning of the pandemic was hindered by, quote, “inaccurate or incomplete data reported to the state” by health agencies.

HOLMES: And one thing that's interesting here is actually both sides are claiming vindication in this report, noting that unsubstantiated means there was no evidence to prove or disprove those allegations. But we have to point out some of Jones' claims were actually found to be unfounded by the inspector general.

And just one thing to note here about what Jones is doing now, she is currently the leading Democratic candidate in Florida's first congressional district, meaning that she is likely to take on Matt Gaetz for his seat in November. Jake.

TAPPER: All right. Kristen Holmes, thanks so much. Appreciate it.