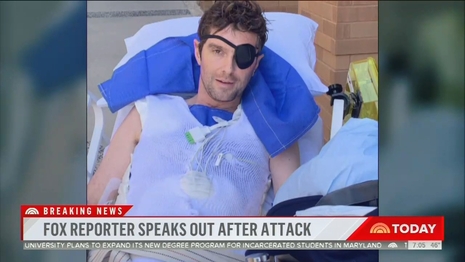 In a series of now-deleted tweets Thursday night, Fox News State Department correspondent and war reporter Benjamin Hall spoke out for the first time publically about his condition after his crew was attacked by Russian artillery outside of Kyiv, Ukraine (leaving 2 others dead). And before getting to how banged up he was (including the loss of body parts), Hall made a point to first pay tribute to his colleagues who lost their lives in the attack.

“Its [sic] been over three weeks since the attack in Ukraine and I wanted to start sharing it all. But first I need to pay tribute to my colleagues Pierre and Sasha who didn’t [sic] make it that day. Pierre and I traveled the world together, working was his joy and his joy was infectious. RIP,” he wrote on Twitter.

Its been over three weeks since the attack in Ukraine and I wanted to start sharing it all. But first I need to pay tribute to my colleagues Pierre and Sasha who didnt make it that day. Pierre and I traveled the world together, working was his joy and his joy was infectious. RIP pic.twitter.com/gbHduLmd5e

In a tribute to his colleagues back in March, Special Report anchor Bret Baier remembered Zakrzewski as “a steady presence in uncertain times. When a correspondent or producer arrived and saw Pierre waiting for them, they knew they were in good hands. Because he could do just about anything.”

And for Kuvshynova: “She was serving as a consultant, helping our teams navigate the city, gathered news, speak with sources. Our correspondents and producers say she was hard-working, funny, kind, and brave.”

In a follow-up tweet, Hall updated concerned supporters of his condition including the loss of parts of his legs and an eye, but he was in good spirits.

“To sum it up, I've lost half a leg on one side and a foot on the other. One hand is being put together, one eye is no longer working, and my hearing is pretty blown… but all in all I feel pretty damn lucky to be here - and it is the people who got me here who are amazing,” he exclaimed. 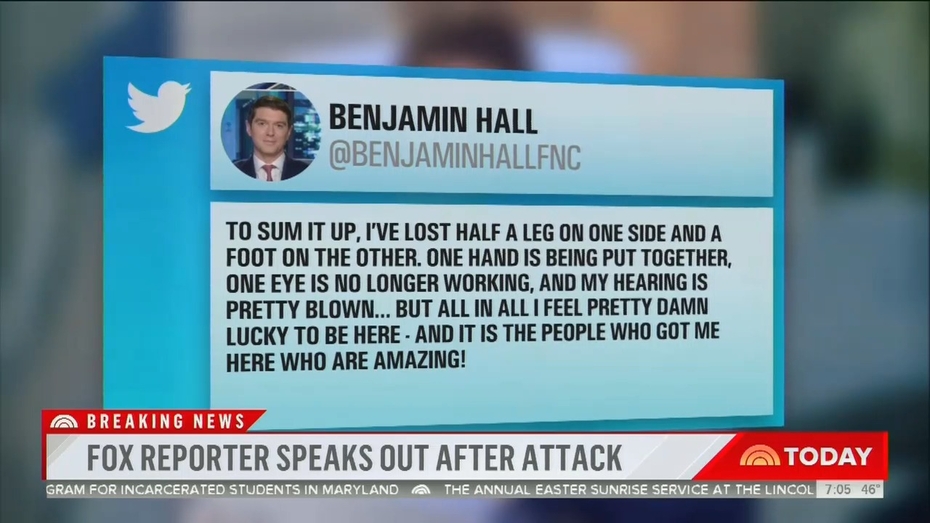 As Fox News reported in late March, Hall was extracted from Ukraine with the help of the “Polish and Ukrainian military, Defense Secretary Lloyd Austin, then the DoD as a whole, and the group Save Our Allies,” Brian Kilmeade explained.

It’s also been reported that the news crews of CNN and The New York Times help in saving Hall on the ground and locating the bodies of Zakrzewski and Kuvshynova. Hall was taken from a hospital in Ukraine to one in Germany and then to one in Houston, Texas.

And while many in the media had enough class to know when not to take cheap shots at a rival during a time of crisis, there were some who made sure to use reports of the initial incident to score grotesque political points.

Hall's final tweet was a video of a Ukrainian Parliament Member mourning the death of Kuvshynova.