Andrew Sullivan: I Was 'Ambushed' By 'Super-Woke' Jon Stewart 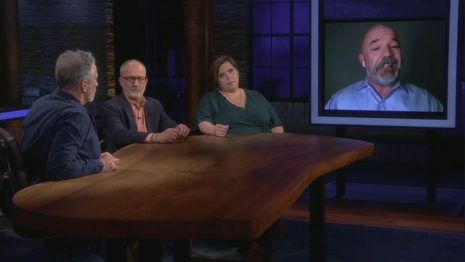 As NewsBusters documented a week ago, comedian Jon Stewart had joined the woke crusade in setting out to label ALL white people racist. And a key feature of his “The Problem With White People” episode was a disturbing three-on-one fight as columnist Andrew Sullivan was assailed by white leftist radicals accusing all white people of being just like the KKK. But in a Substack post on Friday, Sullivan spoke out about how he was lied to heading into the “struggle session” and was “ambushed” by Stewart.

So how did Sullivan find himself in that situation? Well, according to him, he was lied to multiple times by Stewart’s staff.

They apparently called him the day before the show’s taping and wanted him to fly out to New York, but because of things going on in his life, Sullivan couldn’t make it and called them out for just wanting to accuse him of being racist. The booker assured him the appearance was not a debate:

“No I can’t. I’m on deadline and can’t really focus on anything until the Dish is done tomorrow. And why on earth would I do that anyway? Why would I go on a show just to be called a racist?” “No, no, no,” she replied. “Nothing like that would happen. This is not a debate. It’s just you talking one-on-one with Jon, and he’d never do that.” I said I’d think about it — especially since they seemed desperate with just 24 hours till taping — and later I called to say sure, if it’s just Jon. “I trust him to be fair.” I hadn’t had time to read the email invites, so I trusted the booker’s word.

“But just before the taping, as I emerged blearily from Dishing, I found out, in fact, that there would be two other guests, and that it would, indeed, be a debate,” he wrote. And not only was it a debate, but they blindsided him with the presence of a studio audience as well and the episode was outrageously titled “The Problem With White People.”

Sullivan says he “protested to the producers” and said they “ambushed” him. He did admit “they gave me the option of backing out at the last minute,” but he “didn’t want to leave them in the lurch” and felt “Stewart was a pro” and “wouldn’t demonize or curse at a guest; he would moderate; he would entertain counter-arguments; he would defend fair play” since he “was a liberal.” “Wrong,” he added.

To these accusations, Stewart took to Twitter to defend his booker and slam Sullivan. “Nonsense @sullydish,” he wrote in a tweet responding to a Mediaite post. “Our booker handled this last minute [sic] ask impeccably. Mr Sullivan [sic] was told, texted and emailed a detailed account of who was on the program, the content and intent of the discussion.”

He said his booker “patiently handled his high maintenance shenanigans and gave him every opportunity to excuse himself,” which Sullivan did admit to. “This man wasn’t ambushed. Any damage incurred was self inflicted [sic],” he said.

Stewart further lashed out at the backlash to the radical race-baiting ideology he was peddling. “And can we stop with the lazy ‘woke’ shitanytime [sic] someone disagrees with a conservative. [sic] Fuck man,” he whined.

In the rest of Sullivan’s piece, he says Stewart went further than “Robin DiAngelo, in his passionate anti-whiteness” and “hailed” communist Angela Davis. “But Stewart included not a single black voice of disagreement or nuance. He apparently believes that all black people hold the same view. And all white people just refuse to hear it,” he said.

The rest of his post was a detailed breakdown of how the premise of Stewart’s show was wrong, lacking historical and factual context.