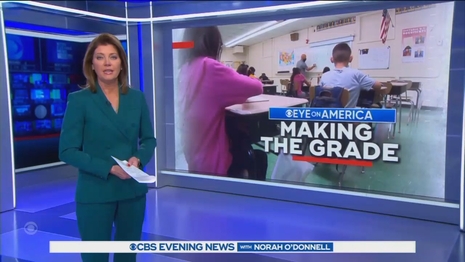 Over a month ago, on February 17’s edition of CBS Mornings, the network via reporter Meg Oliver highlighted a Tennessee school district using a new program to help fill their teacher shortage. But on Wednesday, March 23, CBS Evening News presented the exact same story as if it was a new thing they needed to show viewers. But not only was there no update from February, there was actually less information presented in the report. Yet another example of the lazy shop anchor Norah O’Donnell runs.

Now, it is common for a network to use a similar report from their morning newscast on their evening newscast. This is usually accompanied by an update or more information that becomes available as the story progressed throughout the day, while some b-roll and interviews make the journey too. But waiting over a month to show a report on an evening newscast, with no new information is unheard of.

But as the video below proves (alternating between clips from CBS Mornings and CBS Evening News), the over-a-month-old story was lifted nearly whole cloth and plopped down for O’Donnell’s show.

The most notable difference is the length. The report shown on CBS Mornings clocked in at 2minutes and 35 seconds, but CBS Evening News had less than two minutes (1:56) (this only includes what Oliver reported in the video portion of the segment, no lead-ins or comments from the anchors). This means there was less information imparted to viewers about the program and no new information.

Another difference was a slight change to Oliver’s sign-off at the end of the report. For that morning in February, Oliver concluded with:

DEMETRIUS WINN (teacher speaking to students): Come on, what you got?

Now, what makes us think this is has something to do with O’Donnell?

Well for starters, she gets to decide what’s on it and earlier this month the New York Post published accounts from CBS employees who are fed up with her “toxic behavior,” which includes how segments are selected.

According to CBS insiders, O’Donnell puts on a “‘The Devil Wears Prada’ routine” that involves “a full ‘dress rehearsal’” of the show just a half-hour before they go live. The paper describes this as “an often tense ritual that has seen O’Donnell chewing out dressing room stylists over her hair and makeup” and to apparently iron out what segments make it to air:

“The rehearsals are an excuse to blow up packages 15 minutes before the show,” one source griped. “She changes the words to segments. Everyone has a stroke.”

So if a package gets blown up and you have nothing timely to fill it, what do you? Reach really far back and pull out something innocuous. Perhaps this segment got axed back in February and they found it on the cutting room floor. Ironically, the Wednesday title of the segment was "making the grade."

This programming snafu reminded NewsBusters of a time back in May 2020 when O’Donnell’s show failed to air at all one Tuesday night because of power failure in the D.C. bureau. They were forced to air their online 24-hours streaming service, CBSN in its place.