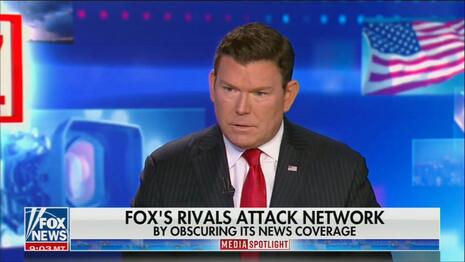 Their prerecorded discussion began with Kurtz drawing attention to recent incendiary comments from CNN’s “Don lemon saying that Fox News should be kicked out of, barred from the White House briefing room because he doesn't like Fox.”

Baier rebuked Lemon’s attack as “just silly” and “just an effort to get clicks or eyeballs.” He then reminded viewers of how Fox had stuck up for CNN and their reporters to be members of the White House press pool during the Trump presidency:

Listen, we're a news organization that has been part of the White House pool really since the beginning, and we've been advocates of fighting for other journalists there including CNN. You mentioned Jim Acosta where we stood up as well as Kaitlan Collins who was going to be kicked out of a gaggle, and I tweeted out, we put out a statement supporting [her].

“So, listen, I think this is all about semantics and trying to get attention. But they know that we're working hard to do journalism every day,” he added.

From there, Kurtz asked his guest about the “fiction that gets perpetrated” by CNN and liberal media that “there isn't a real news division here, that you and your Special Report team and all the journalists and reporters and hosts and anchors and producers somehow don't count[.]”

Again dismissing the narrative as “silly,” Baier recalled that the criticism “goes in iterations in which the focus is all on the opinion folks who do do opinion and they stir the pot and sometimes they're very controversial, but we have a news operation that's breaking news every day.”

Invoking some of their reporters by name, Baier defended their hard work:

You can't tell me what Jennifer Griffin and Lucas Tomlinson do at the Pentagon, what our White House team does, what Bill Melugin along the border -- we're one of the only networks covering the border situation which saw the most, the highest number of illegal immigrants crossing in November ever in the history of the country, and yet we're the only network covering it.

“That is news. That's not made-up stuff. And, you know, we've been fighting that battle a long time. But just like a paper, there's a news side and an opinion side,” he explained.

Addressing the recent revelation that a few members of the network’s primetime line up had messaged former White House chief-of-staff Mark Meadows on January 6, Kurtz and Baier stood by their handling of the situation (click “expand”):

KURTZ: But wouldn't the public want these hosts who’ve interviewed Trump many times and who are mostly sympathetic to Donald Trump to do whatever they could to get him to halt the violence?

BAIER: Yes. It was a lot of stir-up that day that we hadn't been covering it. But we did on-air. Chad Pergram did from Capitol Hill, I did it on Special Report.

And, you know, the big thing was what critics said was the hypocrisy of what they were saying privately on texts and publicly on their shows. I called all three of them directly and said, “what do you say about this.” And they said, “we stand by everything we've said publicly and privately”. And we reported that.

“You know, sometimes we have to report on things that are in the news that are us, and it really stinks because I'm trying to never be the news and trying to report and cover things fairly. Sometimes it has to be us, and we did it that way this past week,” Baier lamented.