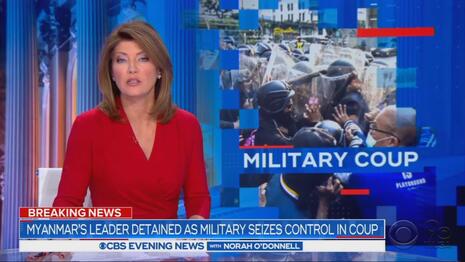 Often on the foreign policy front, there’s not a “good” and “bad” side to a conflict, but two sides you want little to do with. Yet, during Monday’s edition of the Evening News, CBS rushed to take a swipe at former President Trump by trying to tie him to the military coup in Myanmar. But in doing so, they defended State Counsellor (prime minister equivalent) Aung San Suu Kyi, an elected leader who sat silent as the military carried out a genocide in 2017 against the Rohingya people.

Obviously, a military coup to overthrow a duly elected government was a terrible thing that needed to be condemned. So, of course, CBS was desperate to find some way to tie it to Trump.

And in closing out his report, Inocencio touted: “Now detained as she was for 15 years under house arrest, the 75-year-old Aung San Suu Kyi has called on the people to protest against a U-turn back to dictatorship.”

Now, all three of the broadcast networks covered the Myanmar coup Monday evening. But only CBS tried to tie it to Trump. In fact, on NBC Nightly News, chief foreign correspondent Richard Engel showed how both sides of the conflict were not to be trusted. And despite the fact, President Obama had hosted her at the White House and her Nobel Peace Prize, in recent years Suu Kyi showed her true colors.

“But Suu Kyi had long fallen from grace, accused of staying silent at what's often called the genocide against Myanmar's Rohingya people,” he explained to viewers. “Suu Kyi made a deal with the military. And in the process, lost her credibility because of atrocities she refused to recognize.”

And in addition to staying silent on the genocide, Suu Kyi’s government also arrested persecuted two Reuters reporters who were exposing the atrocities to the world.

“Wa Lone, 33, and Kyaw Soe Oo, 29, had been convicted in September and sentenced to seven years in jail in a case that raised questions about Myanmar’s progress towards democracy and sparked an outcry from diplomats and human rights advocates,” Reuters wrote when their reporters were freed. They spent over 500 days in jail.

In their sprint to suggest Trump gave the coup a talking point, CBS proved that they were willing to overlook and defend the woman who allowed and tried to cover-up a genocide happening under her watch.

CBS’s defense of a leader who allowed a genocide was made possible because of lucrative sponsorships from Liberty Mutual. Their contact information is linked so you can tell them about the biased news they fund. CBS Evening News has also asked people to text anchor Norah O’Donnell at this number: (202) 217-1107.

RAMY INOCENCIO: Tonight, with soldiers deployed, Myanmar's military announced a state of emergency for one year. There were no shots fired as they rounded up and arrested an unknown number of its elected leaders and members of Myanmar's pro-democracy party; the most famous among them Aung San Suu Kyi, the country's top civilian leader.

Echoing the claims made by former President Trump about fraud in the U.S. election, the military in Myanmar claimed massive election fraud in last November's parliamentary polls. Aung San Suu Kyi's party won a landslide, the election commission says fraud did not happen.

UNIDENTIFIED WOMAN: I'm not really that surprised because the army have always been a part of my life.

INOCENCIO: Now detained as she was for 15 years under house arrest, the 75-year-old Aung San Suu Kyi has called on the people to protest against a U-turn back to dictatorship. Ramy Inocencio, CBS News, Beijing.