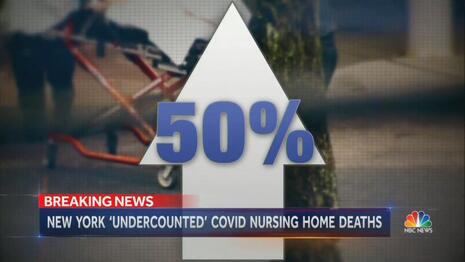 In a bombshell report out Thursday, The New York Times exposed how New York State’s Health Department was undercounting nursing home deaths by up to 50 percent. It was a staggering revelation considering Democratic Governor Andrew Cuomo was the one who ordered elderly COVID patients be returned to their long term care facilities. But later that evening, both ABC’s World News Tonight and the CBS Evening News completely ignored the scandal, dubbed #CuomoCoverUp on Twitter.

While ABC and CBS reported on GM no longer making gas-powered cars and a snowy owl spotted in New York, respectively, NBC Nightly News was the lone broadcast network to give The Times piece any coverage (1 minute and 25 seconds).

“Tonight, New York State accused of undercounting COVID nursing home deaths by as much as 50 percent,” NBC correspondent Kristen Dahlgren reported. “The results of a months-long investigation by the state attorney general. The scathing 76-page report finding the state didn’t report nursing home residents who died from COVID-19 in the hospital.”

Dahlgren even spoke with the daughter of one of Cuomo’s victims, who argued that third-graders were smarter than the Governor (click “expand”):

DAHLGREN: She says her mom died of dehydration in a home overrun with COVID after New York Governor Andrew Cuomo opening nursing homes to COVID patients to free up hospital beds.

BESS: A third-grader would know not to send COVID patients into a nursing home.

Someone get Jeff Foxworthy on that.

When questions were first being raised about Cuomo’s failed leadership, he was a liberal media darling, even calling him the “acting-president.” And the networks covered up (including NBC) the bipartisan calls for an investigation from state lawmakers. They have also been largely silent on Cuomo’s other disastrous order that made hospitals throw out vaccine doses.

And some of their adulations were just embarrassing. Last fall CBS This Morning co-host Gayle King praised him in an interview as a “hard truth” teller. Then there was CBS Sunday Morning host Jane Pauley who was openly flirting with the new eligible bachelor.

But back in May, NBC was also the broadcast network stand out when they first reported on Cuomo’s nursing home scandal. They even chided what he had done and compared him to other governors. “That number climbing fast. Connecticut Governor Ned Lamont thinks forcing nursing homes to take COVID positive patients, as most states are doing, is a path to disaster,” reported senior investigative correspondent Cynthia McFadden, at the time.

Routine NewsBusters readers know that we’ve covered Fox News Channel’s senior meteorologist Janice Dean’s battle with Cuomo’s corruption, as she’s tried to find justice for her in-laws who died because of his order.

In an appearance hours earlier on The Faulkner Focus, she had this to say about the bombshell revelations (click “expand”):

I don't really know what to say. When I saw the report, and I knew that it was coming probably an hour before it was released, I called my husband and I called my sister-in-law and I said that maybe the angels won, maybe the angels will have their day in court and maybe this governor will be held accountable, Harris. I didn't want to be in this position. I'm not a political person, but my family was affected and I wasn't seeing the coverage. I wasn't seeing the questions being asked of this governor. He continued to pass the blame on everyone else and everything else. And he still to this day will not accept any responsibility. And there were lawsuits and there were journalists that wanted to do good and get those numbers for all of the families that deserve them. And finally today, there is a ray of light. There is sunshine in darkness. And I thank this attorney general, I know that there have been thousands of families that have written letters and have wanted to have answers. And I'm so grateful on behalf of all of them for giving me love and support, because this is never a role I thought I would ever be in Harris. But I'm so grateful today that justice might be served.

Hopefully, this investigation was the beginning of the road to justice for the many families destroyed by Cuomo’s incompetence. Which, ironically, he warned against on Tuesday.

Between scandals such as this one and the growing mental toll of the pandemic (such this Illinois mother, who lost her son to suicide), there's a plethora of things that government officials like Cuomo and his buddies across the country have to answer for.

And it was only just a few days ago that someone warned “incompetent government can kill people.” That man? Andrew Cuomo.

New York Governor Andrew Cuomo repeats his line that "incompetent government can kill people. This is not a joke."

This disgusting cover-up of Governor Andrew Cuomo’s nursing home body count was made possible because of lucrative sponsorships from Fidelity on ABC and CBS. CBS Evening News has also asked people to text anchor Norah O’Donnell at this number: (202) 217-1107.

LESTER HOLT: A shocking new finding by officials in New York, the state health department severely undercounted the number of COVID deaths among nursing home residents. Kristen Dahlgren has details for us.

KRISTEN DAHLGREN: Tonight, New York State accused of undercounting COVID nursing home deaths by as much as 50 percent. The results of a months-long investigation by the state attorney general. The scathing 76-page report finding the state didn’t report nursing home residents who died from COVID-19 in the hospital. While claiming some nursing homes failed to isolate COVID patients.

DAHLGREN: She says her mom died of dehydration in a home overrun with COVID after New York Governor Andrew Cuomo opening nursing homes to COVID patients to free up hospital beds.

BESS: A third-grader would know not to send COVID patients into a nursing home.

DAHLGREN: Cuomo declined to comment. But in a statement, New York State’s health commissioner denied an undercount. Saying, the department of health “consistently reported numbers based on the place of death.”