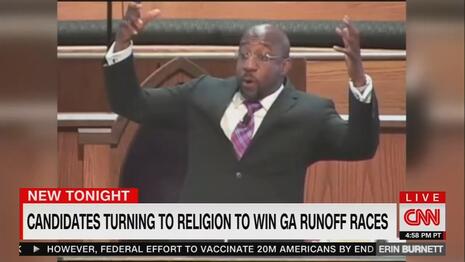 Even with new reporting from the Washington Free Beacon out Monday that detailed how, in 2002, a then 12-year-old boy was abused at a church camp overseen by future Senate Democratic candidate Raphael Warnock, CNN’s Erin Burnett OutFront continued to be a staunch defender. Instead of reporting on the account of abuse victim Anthony Washington, senior national correspondent Kyung Lah defended Warnock’s radical sermons from Republican “attacks.”

Throughout the 2020 election cycle, numerous videos had surfaced of Warnock preaching radical leftist ideology from his pulpit. And as National Review published in mid-November, it was off the wall stuff. Warnock accused Israel of being like “apartheid South Africa,” described Israelis as “birds of prey” in a letter, and gave a speech praising Reverend Jeremiah Wright’s “God damn America” sermon.

But according to Lah, “Reverend Warnoch’s pro-choice stance and his words from the pulpit, often taken out of context, have been the target of the fiercest Republican attacks.”

Yet, while Lah was defending Warnock preaching leftist radicalism, she and CNN turned a blind eye to his connection to a camp that abused children for years.

According to Alana Goodman, a senior investigative reporter for the Beacon, “Washington’s account of the 2002 events provides the first direct insight into the alleged abuse and neglect that transpired at Camp Farthest Out, which Warnock oversaw as senior pastor of Maryland's Douglas Memorial Community Church, and raises new questions for the Democrat, who is currently vying for a Senate seat in Georgia.”

Recalling the abuse that he received at Warnock’s camp, the now 30-year-old Washington talked about how counselors threw a bucket of urine on him and made him sleep outside in the cold because he wet the bed (click “expand”):

"I’m like, ‘Hell no I’m not, it’s cold out there,’" he said. "[The counselors] wouldn’t let me in the house, not at all. … Shut the door to the cabin, locked it," he said. "It was dark. There wasn’t nothing out there but the basketball court. I ain’t never experienced nothing like that. Like, you’re not in a tent, you’re not in nothing. You’re just out, God knows where."

Counselors also threw urine on him from a bucket they used when there wasn’t a bathroom nearby, he added.

"I went through that experience myself. I don’t even like talking about this shit. That shit happened. … It was like in a bucket. They would keep that shit in a bucket," he said.

“I don’t think nobody like [Warnock] should be running for damn Senate nowhere, running a camp like that. He should not be running for government,” he added after learning about the Democrat’s bid for Senate.

And according to a Maryland state trooper investigating the abuse claims, Warnock was arrested for trying to obstruct justice by interfering with the questioning of camp counselors. Though, the charge was later dropped.

Goodman also noted that multiple state agencies found good reason to shutdown Warnock’s camp. “In June 2003, the Department of Health denied Camp Farthest Out's certificate to operate a youth camp. One reason for the denial, according to the records, was that the camp failed to report at least five findings of child abuse levied against its director, Brian Carter, by the Department of Social Services,” she reported.

If CNN was going to do a report defending Warnock’s time as a church official, then they needed to take responsibility and report on his abusive camp. In this instance, the situation wasn’t political at all. It was about his time overseeing a camp that abused children and his alleged attempt to obstruct justice.

BIANNA GOLODRYGA: President Trump traveling to Georgia next Monday ahead of the pivotal Senate run-off races. This, as both sides turning to religion to win voters there. Kyung Lah is out front.

KYUNG LAH: At the Antioch AME church in Atlanta suburbs. The Georgia Senate run-off is front and center. Progressive and conservative Christian groups determined to move the faithful from the pews to the polls.

LAH: Reverend Warnoch’s pro-choice stance and his words from the pulpit, often taken out of context, have been the target of the fiercest Republican attacks.

LAH: Now President Trump is scheduled to be in Georgia a week from today. It is the day before the Senate run-off election. And you get some signs from where exactly he is going. Dalton, Georgia, it is the county the President won by 70 percent. It is a reminder, Brianna, that this run-off, at least for the Republican side, is about trying to turn out the base here, white evangelicals among them.