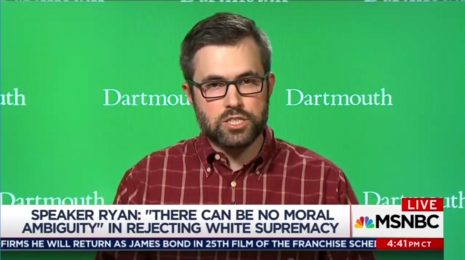 Last Friday (9/11 of all days), the Washington Post published a “perspective” piece written by Rutgers University “historian,” Mark Bray. It appeared in the print edition in the Sunday Outlook op-ed section in the regular "Five Myths" feature.

You might remember Bray from NewsBusters reporting about how NBC political director Chuck Todd gave him multiple platforms to preach Antifa’s virtues of physically assaulting your political opponents. Well, in his Post piece, he was out to massage the image of the leftist terrorist group by debunking five "myths" about them.

Bray, who’s proudly the author of Antifa: The Anti-Fascist Handbook, began by heaping praise on the violent organization. “But antifa has been a staple of radical politics across Europe, Latin America and beyond for decades. Even in the United States, this tradition of militant antifascism has a long history under the banner of the Anti-Racist Action network.”

Note how he doesn’t capitalize the letter “A” when writing the name of the group. That ties into the first so-called “myth” he sought to debunk: “Antifa is a single organization.” “But [President] Trump cannot designate ‘ANTIFA’ as a terrorist organization because antifa is not an organization. Rather, it is a politics of revolutionary opposition to the far right,” he suggested, adding that while cells existed they were more of an ideological movement with no hierarchical structure.

But on August 4 of this year, the Senate Subcommittee on the Constitution held a hearing to discuss the threat Antifa posed to free speech. In the hearing, Kyle Shideler, the director of the Center for Security Policy detailed exactly how well organized Antifa was.

According to a published version of his opening statement, Shideler told the committee (Click “expand”):

The most basic structure of Antifa is the affinity group, described by the proAntifa website CrimethInc, as the “essential building block” of anarchist organization- A small cell of individuals, known to each other, who agree to come together to participate in “direct actions”- including sabotage, vandalism, and premediated assault.

Affinity groups come together to form clusters, and larger clusters may organize actions using what are called,“spokescouncils.”

Antifa “chapters” form at the city level and join regional networks such as Torch Antifa, the largest antifa network in the U.S, as well as national and international networks.

Speaking on the Antifa’s rise in the United States, Shideler told senators the group “developed out of the communist urban guerilla and terrorist movements of the late 1960s and early 1970s such as the Weather Underground and Germany’s Red Army Faction.”

Bray next tried to disprove the “myth” that “Antifa masterminds violence at Black Lives Matter protests.” “But neither the Justice Department, the FBI nor the press have found evidence to corroborate the grandiose allegation that the most widespread and significant political upheaval this country has seen in half a century was masterminded by one shadowy organization,” he wrote.

Besides the fact that Andy Ngo, editor-at-large for The Post Millennial website, has proven that people arrested during the riots in Portland and around the country have extensive histories with the terrorist organization (showing their mugshots and arrest records), Attorney General William Barr said there was evidence.

In an interview with CNN’s Wolf Blitzer on September 3, Barr explained how the Justice Department was tracking members of Antifa as they crisscrossed the country to stoke terror:

I've talked to every police chief in every city where there's been major violence, and they all have identified Antifa as the ramrod for the violence. They are flying around the country. We know people who are flying around the country. We know where they're going. We know – we see some of the purchases they're making before the riots of weapons to use in those riots. So, we are following that.

When Blitzer pressed him on if what they were doing was illegal, Barr unequivocally said, “Crossing state lines to engage in rioting is.”

While there were no formal ties between the groups, the Democratic Party has been very permissive of the violence as of late. Bray did accurately note that Speaker Nancy Pelosi (D-CA), at one time, denounced the group. But at the Senate’s Antifa hearing, radical leftist Senator Mazie Hirono (D-HI) stormed out of the hearing early and refused to denounce the group despite chairman Ted Cruz’s (R-TX) repeated urges for her to do so.

Back in July, Congressman Jerry Nadler (D-NY) claimed that Antifa violence in Portland was a “myth.” And in the early days of the riots, now-Democratic vice presidential nominee Kamala Harris urged supporters to donate money to defense funds that bailed agitators out of jail.

I ran into Jerry Nadler in DC and asked him to disavow the Antifa violence/rioting in Portland.

On the finance “myth,” Shideler had that covered too and it was extensive (Click “expand”):

Antifa relies heavily on support organizations such as the Democratic Socialists of America, The International Workers of the World, Refuse Fascism and the National Lawyers Guild, and in coordination with other protest organizations. It is common for antifa to require outside groups to sign what are essentially “memorandums of understanding” to ensure allies agree not interfere with criminal activity, in exchange for “protection.”

Antifa uses a variety of methods to fundraise, including crowdfunding technology. The International Antifa Defense Fund has so far raised more than $53,000 via the crowdfunding site Fundrazer. While some crowdfunding companies are officially content-neutral, others are explicitly ideological, and only facilitate Antifa and similar fundraising projects.

Many of Antifa’s needs are provided free of charge by allied organizations. Support organizations host and provide armed and unarmed training for antifa members at no or low cost.

Support organizations cover most major expenses such as transportation, bail, and lawyers’ fees.

Other organizations such as “Riseup.net” provide antifa chapters with free access to secure servers, communication tools, and applications.

“In terms of financing, remember terrorism is a low-cost form of warfare. The entire 9/11 plot cost less than half a million dollars and even by al Qaeda standards, Antifa’s low-intensity violence is extremely cost-efficient,” he added.

Bray’s final myth was “Antifascists are the 'real fascists.'” “Comparing antifascists to fascists only makes a bit of sense if one divorces the tactics from the underlying views that animate them,” he whined. “Such comparisons stem from the misguided horseshoe theory: that ultimately political extremes meet.”

The goal here was to suggest that just because Antifa was “anti-fascist” it meant they weren’t involved in fascist activities, and thus weren’t extremists. Bray even praised them as “feminist, anti-racist, anti-capitalists who seek to abolish prisons and police” so he could argue they were doing it all for the right reasons.

Clearly, all the evidence was against Bray and the Washington Post was again complicit in Antifa’s actions.