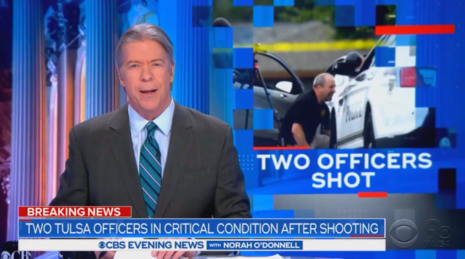 On Tuesday, 15-year Tulsa Police Department veteran and Sergeant Craig Johnson died at a hospital after sustaining a gunshot wound to his head on Monday. Six-week rookie Officer Aurash Zarkeshan was also in critical condition after also being shot in the head during the same struggle with a suspect. Though Monday's CBS Evening News was the only broadcast newscast to report on their hospitalization, neither they nor ABC, or NBC informed their viewers about Sgt. Johnson’s passing.

Two Tulsa, Oklahoma, police officers are in critical condition tonight after both were shot in the head during a traffic stop. One of the officers is a rookie, he’d only been on the patrol for six weeks, the other a sergeant. Police say a suspect is now in custody.

But the incident was never mentioned again, even after one of the officers had died and the other was still in critical condition.

And while NBC News didn’t care enough to have a report written up on their website, ABC News did. Which begged the question: why didn’t they want to give it airtime?

In their online report, ABC’s Christina Carrega began with a play-by-play retelling of the events that led up to the shooting:

[The suspect] refused to comply with officers' commands to step out of his car, said Tulsa Police Chief Wendell Franklin at a press conference on Monday.

Johnson displayed a stun gun and asked Ware to get out of the car 12 times before firing. Franklin said the stun gun was not effective and Zarkeshan also pepper-sprayed Ware.

A struggle ensued and Ware pulled out a gun and fired "several shots at close range," striking both officers in the head, said Franklin.

“Both officers were taken to the hospital in critical condition,” she added. “Johnson, a 15-year veteran, died on Tuesday afternoon. He leaves behind a wife and two young sons.”

On Wednesday morning’s Fox and Friends, Fox News Channel co-anchor Brian Kilmeade brought up the slaying to retired Dallas police officer C’Mone Wingo. “I think I just heard this morning that one of the officers from Oklahoma passed away. And I think that's so sad,” she said.

Wingo went on to lament how many in society were demonizing police officers who worked hard for that society:

Meanwhile, the networks promoted efforts to “defund the police,” NBC scoffed at the fact that cops were getting increasingly targeted in attacks, and they also decried President Trump’s “unusual step” to continue “defending” the police.

CBS’s meager news brief and refusal to follow up was sponsored by Downy. Their contact information is linked.

The transcript is below:

MAJOR GARRETT: Two Tulsa, Oklahoma, police officers are in critical condition tonight after both were shot in the head during a traffic stop. One of the officers is a rookie, he’d only been on the patrol for six weeks, the other a sergeant. Police say a suspect is now in custody.