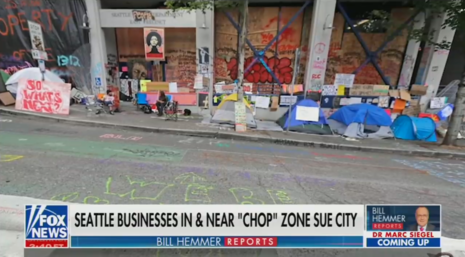 Overnight Wednesday, over a dozen local businesses and residents suffering at the hands of the so-called “Capital Hill Occupy Protest” filed a 56-page class-action lawsuit against the City of Seattle for allowing the extremist encampment to terrorize their neighborhood. The Thursday morning and evening flagship newscasts from ABC, CBS, and NBC came and went with none of them covering the suit, effectively obfuscating the truth from their viewers.

As NewsBusters has extensively documented over the past couple of weeks, the networks had been actively trying to protect the encampment’s radicals from criticism. First, they turned a blind eye altogether, and when they had no choice but to cover the “Capital Hill Autonomous Zone,” as it was called at the time, they downplayed the craziness and provided cover.

But when the shooting and killing started, they tried to cover it up. They refused to report on the black teen who was shot and killed in the zone last Saturday. And there was no mention of the Sunday or Tuesday shooting at any point during the week.

It was those shootings that were the impetus for the businesses and residents to band together and sue the city for not protecting their rights and property.

Now, the plaintiffs made it clear from their first paragraph that they supported the defendants’ right to peaceably assemble and the Black Lives Matter movement. Noting: “This lawsuit does not seek to undermine CHOP participants' message or present a counter-message.”

But at the same time, they didn’t hold anything back when they blamed the city for leaving them in a place of  danger:

Rather, this lawsuit is about the constitutional and other legal rights of Plaintiffs—businesses, employees, and residents in and around CHOP—which have been overrun by the City of Seattle’s unprecedented decision to abandon and close off an entire city neighborhood, leaving it unchecked by the police, unserved by fire and emergency health services, and inaccessible to the public at large. The City’s decision has subjected businesses, employees, and residents to extensive property damage, public safety dangers, and an inability to use and access their properties.

As the libertarian magazine Reason pointed out, “By assisting CHOP residents in blocking off rights-of-way, the lawsuit argues, the city has prevented them and their customers and vendors from accessing their properties, leading to a decline in business.” One example they cited from the lawsuit was a physical therapist who says disabled clients could no longer make their way to the facility.

“The suit also claims that by letting protestors occupy streets and set up community gardens in a public park, the City of Seattle has made a gift of public property to private parties, in violation of the ‘gift clause’ in the Washington State constitution,” Reason added.

The magazine quipped: “A number of western states have these gift clauses, which were originally intended to prevent the government from granting privileges to private corporations. It's an irony that private businesses are now invoking the clause to stop Seattle from tolerating a leftist commune.”

This what the networks were aiding by not covering CHOP critically.

The networks’ silence was sponsored by Geico on ABC, ADT on CBS, and Depend on NBC. Their contact information is linked.