The right to keep and bear arms is one of the many things that makes America a truly great place to live. But in a Wednesday Tweet responding to an NRATV video promoting a rape survivor who now carries a firearm, CNN host Chris Cuomo appeared to dismiss her empowerment with a flippant “Only in America” chide.

The NRATV video tweet shared the personal story of motivational speaker Kimberly Corban, who was raped in her off-campus college apartment. And as a result, she now carries a gun to protect herself and her family, and counts herself as a proud NRA member. “I'm a mother of two, and if a predator or anyone else tries to harm me or my family, they have to come through my firearm first," the tweet said citing her comments.

"I'm a mother of two, and if a predator or anyone else tries to harm me or my family, they have to come through my firearm first." —Kim Corban #WednesdayWisdom pic.twitter.com/c2tWBeOi18

Cuomo’s callous response caused him to get absolutely dragged on Twitter. “Only in America can ivory tower [Chris Cuomo] say such a thing about a rape survivor who never wants to be a victim again,” Townhall editor Katie Pavlich said. “[Kimberly Corban] bravely telling her story has literally saved the lives of other women through the Second Amendment.”

Daily Caller White House correspondent Amber Athey unloaded on the CNN talking head: “It sounds a lot like a [CNN] anchor is mocking a rape survivor who chooses to protect her children with a firearm. Is that what you are doing, [Chris Cuomo]? Please clarify.” 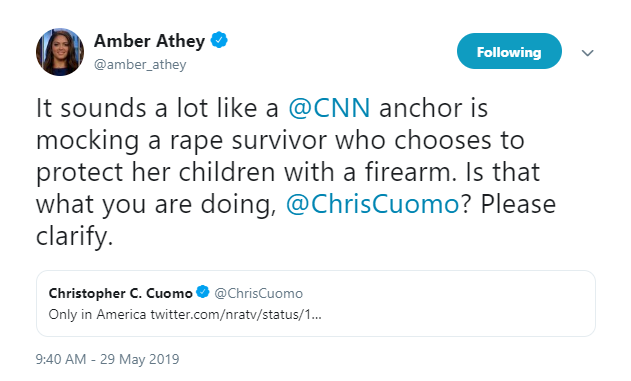 A member of Congress even got into the mix. Congresswoman Liz Cheney (R-WY) tweeted: “Yes, [Chris Cuomo], in America we believe women should be able to defend themselves. And we know the #SecondAmendment guarantees our right to do so.”

“You might want explain this tweet a little better to those of us who’ve actually had to face predators in our own homes and defend ourselves without a big strong man like yourself,” requested senior Fox News Channel meteorologist Janice Dean.

Almost eight hours after his original condescending tweet, Cuomo responded in a thread to Dean trying to undo the intense backlash. According to him, people were supposed to understand that “only in America” was supposed to mean this instead of what was clearly a cheapshot:

“Only in America” are we still debating the legitimate right to protect oneself like you and many others vs sensible way to keep guns from wrong people. Only here can we not address the issues around school shootings (…) in a way that respects the ill and also people who get guns legally (as I did) and use responsibly (as I). We are stuck with good people having to beg to keep a right and not getting done what is right for federal reasonable restrictions and mental health reform.

All that from three words? Yeah right. “I am sorry for confusion. I take the issue and the stories of violence seriously,” he added, the guy who promotes politically motivated violence on his show. He concluded by suggesting Dean was “misled”.

Corban also weighed in and asked Cuomo if he wanted to talk to her about his positions. “Hi [Chris Cuomo]. Looks like you forgot to tag me. Care to chat about this?” Cuomo has not responded to her on Twitter.