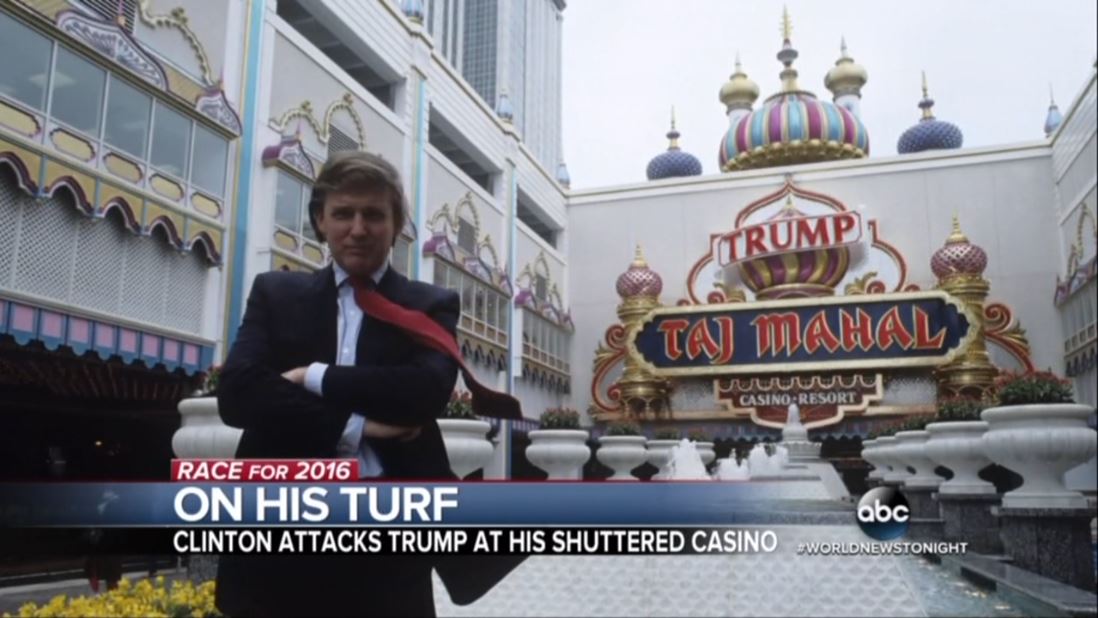 Hillary Clinton’s campaign took a trip to Atlantic City, New Jersey Wednesday to slam Donald Trump for shutting down two of his casinos there. ABC and NBC were more than happy to aid Clinton in her Trump bashing cause during their evening news programs. “Hillary Clinton went on the attack against Trump today during a rally in Atlantic City right in the shadow of a now shuttered Trump casino,” reported NBC’s Lester Holt on Nightly News, “Criticizing his company's filing for bankruptcy.”

ABC and NBC parroted Clinton’s attacks on Trump and talked about Trump’s bankrupted casinos as if they were the only casinos to have closed. “But again and again, Trump filed for bankruptcy on his properties, Clinton now accusing Trump of abandoning the famous boardwalk and its workers,” Vega said.

But the truth is, Trump’s casinos were not the only ones to shut down. Four of the city’s 12 casinos closed in 2014 after they all saw their incomes plummet by 50 percent in eight years. And in December 2015 CNN Money reported that, “three of the remaining casinos are "already on the brink," with the Trump Taj Mahal, Caesar's and Bally's having filed for Chapter 11 bankruptcy protection.” Atlantic City as a whole was so bad the state government was forced to restructure how the casinos payed taxes.

LESTER HOLT: Out of the cloud by the findings about her e-mails, Hillary Clinton went on the attack against Trump today during a rally in Atlantic City right in the shadow of a now shuttered Trump casino. She called in to question Trump's business judgment, something he’s made a cornerstone of his campaign. Criticizing his company's filing for bankruptcy. We get more from NBC's Andrea Mitchell.

HILLARY CLINTON: It's fair to ask since he is applying for a job, what in the world happened here?

MITCHELL: Clinton meeting with striking workers at Trump's former Taj Mahal who claim they lost their pensions and healthcare.

CLINTON: The people he's trying to convince to vote for him now are the same people he's been exploiting for years.

MITCHELL: Trump today calling bankruptcy proceedings a “commonly used practice” that “ultimately saved jobs.” Clinton going after Trump's record but tonight still trying to defend her own. After the FBI director's blistering attack on her judgment, contradicting many of her public defenses for her e-mail server.

CLINTON: I did not send or receive any material marked classified.

COMEY: 110 e-mails in 52 e-mail chains have been determined by the owning agency to contain classified information.

CLINTON: There were no security breaches.

MITCHELL: But none of it enough to bring charges. 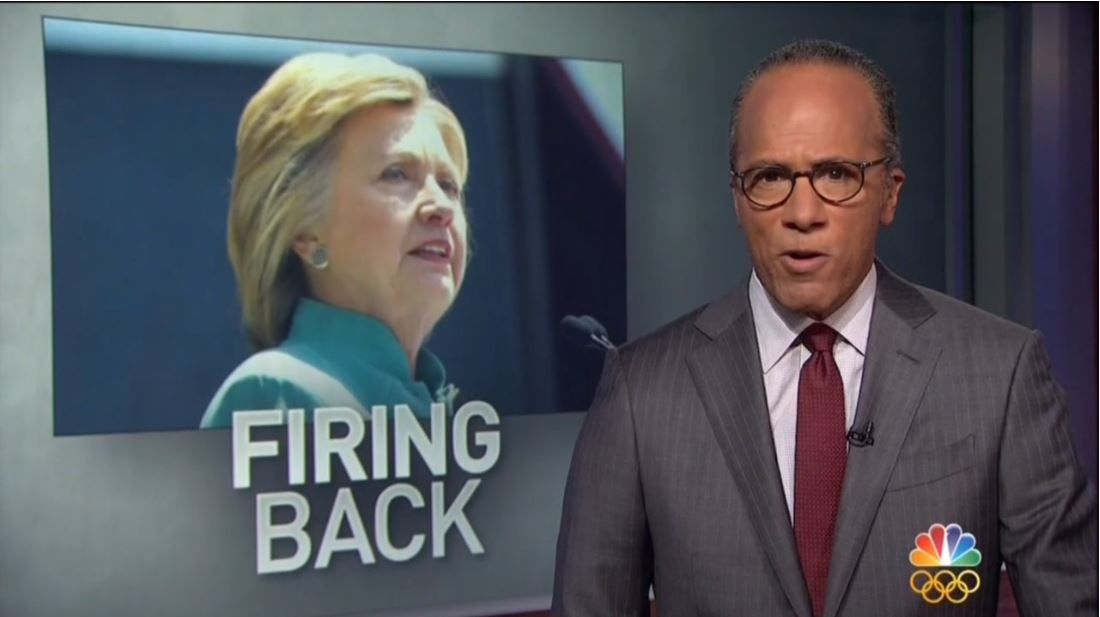 JOHN HEILEMANN: Things that Comey said will continue, I think, to weigh on her, from now probably all the way to Election Day.

UNIDENTIFIED WOMAN: Well, I was going to vote for Hillary. Now, I don't even know if I will vote this election.

UNIDENTIFIED MAN: I don't think that was a major issue and a major degree of importance in her election.

MITCHELL: And tonight, the Clinton campaign says that the attorney general's decision not to prosecute resolves the matter and Republicans shouldn't play politics, in their view. And another positive sign for Clinton, NBC news has learned from Democratic sources Bernie Sanders could endorse Clinton next Tuesday in New Hampshire, it all depends how talks on the party platform go this weekend. Lester.

HILLARY CLINTON: What he did for his businesses and his workers is nothing to brag about. In fact, it's shameful.

VEGA: Right here in Atlantic City, outside his shuddered Trump Plaza Casino. Trump's casinos once fixtures in this city.

DONALD TRUMP: It's some crowd. Good luck, everybody. Do well. Use it in good health.

VEGA: But again and again, Trump filed for bankruptcy on his properties, Clinton now accusing Trump of abandoning the famous boardwalk and its workers.

CLINTON: And I have a plan to make sure big businesses can't stiff suppliers and contractors, like Donald's been doing for years. 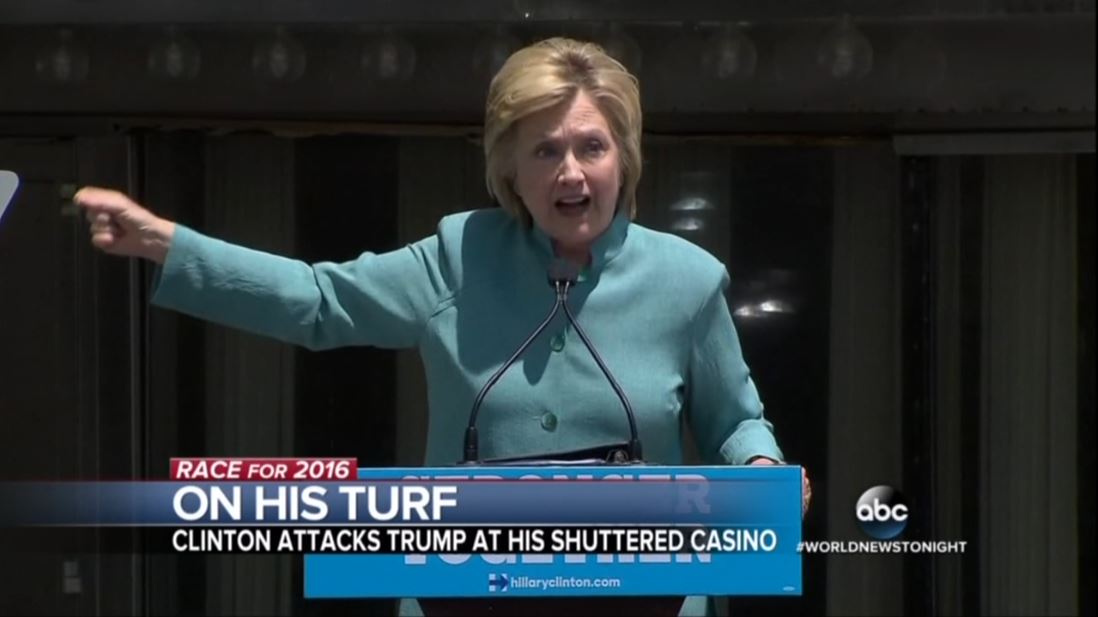 VEGA: Hundreds of plumbers, painters, waiters and others accuse Trump of not paying them for their work, according to a USA Today investigation. A Trump spokeswoman now offering this explanation of his bankruptcies.

KATRINA PIERSON: And Mr. Trump believes in putting on your oxygen mask on first before helping others.

VEGA: The candidate later defending himself.

VEGA: But as Clinton rails on Trump, she is still under the shadow of that FBI investigation. We tried to ask her about it today. Do you still maintain that you did not send or receive classified information, Madam Secretary? No comment.

Today, House Speaker Paul Ryan saying Clinton should no longer have access to classified intelligence. And Donald Trump, not letting up.

TRUMP: Today is the best evidence ever that we've seen that our system is absolutely, totally rigged. It's rigged.

MUIR: And Donald Trump will very likely be reacting to Loretta Lynch now tonight as well. Cecilia is live in Atlantic City. And word there could be an endorsement now coming from Bernie Sanders?

VEGA: David, we're hearing that both campaigns are now in talks about a possible endorsement and that could come as soon as next week in New Hampshire. David?