Washington Post national political correspondent Karen Tumulty arrived early in Cleveland on Monday for next week’s Republican National Convention (RNC) and upon entering her hotel room, she peered out the window to find a Media Research Center (MRC) billboard staring directly ahead at her with the MRC’s signature “Don’t Believe the Liberal Media” slogan.

In a tweet to her Twitter followers at 10:23 a.m. Eastern, she revealed that she’s “[j]ust arrived in Cleveland” to find out that the “[v]iew from her hotel room is billboard” reading “Don’t Believe the Liberal Media!”

In a tweet seconds later, Tumulty posted a photo of the view outside her room with the MRC billboard and the caption: “Greetings from Cleveland!” 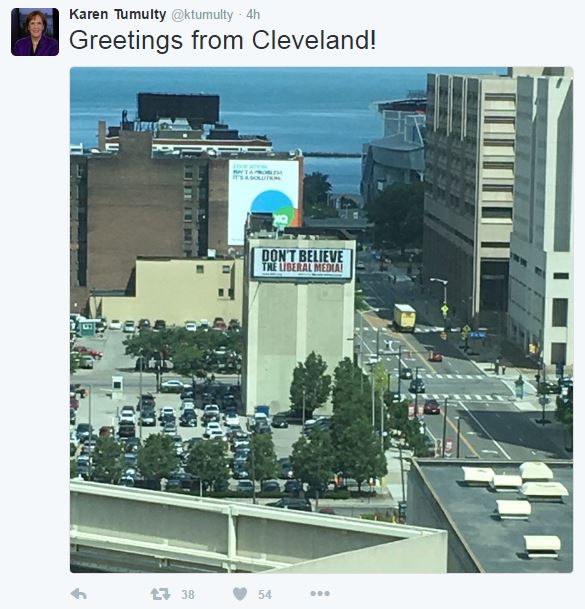 Commenting on her new surroundings, Tumulty made a reference to a famously symbolic sign in The Great Gatsby that the MRC sign is trying to speak to her “like the optometrist sign” in F. Scott Fitzgerald’s 1925 novel.

Tumulty also retweeted one user’s thoughts about the billboard by making a Seinfeld reference: