On The Late Show with Stephen Colbert on Thursday night, Secretary of State John Kerry came on to explain how wonderful the Iran deal is. Colbert began by saying “Congratulations for the Iran deal,” as the New York crowd cheered and clapped.

After that, Colbert did present Kerry with what opponents might say, bringing up the comparison of Neville Chamberlain's "Peace in Our Time" and asked how the Iran Deal wasn’t a capitulation to an adversary.

Secretary Kerry talked about verification and the fact that for at least 25 years things will be watched and forever capable of inspections. Colbert then asked, "And aren't we kicking the nuclear can down the road 15 years and letting somebody else as Secretary of State, Secretary of State Taylor Swift, letting her deal with this 15 years from now?" At this question, the Secretary brought up Secretary Taylor Swift being better than Secretary Gary Busey, but did not answer the question.

Next, Colbert asked why we can trust Iran to hold to this deal if they hail us as the Great Satan, and have a belief that they can be dishonest towards evil. Kerry responded with, "Well, they might. Stephen, and they do call us the Great Satan, but this deal wasn't intended to solve all of our problems with Iran." The answer following didn't address that fear well, but Secretary Kerry thought an Iran without nukes would be easier to deal with than an Iran with nuclear weapons.

Colbert then tried to tie the Iran negotiations to Kerry’s (brief) service in Vietnam. Kerry invoked the idea that war was effectively inevitable and used the imagery of seeing and losing friends in Vietnam as rationalization for why the treaty was necessary. He didn't want to send young men and women to die against Iran, when they would eventually trigger a regional, if not global conflict. This imagery gives us the indication that it was a treaty by any means necessary, simply to prevent escalation of violence.

STEPHEN COLBERT: You don't have to ask anybody for money, just not end the world. Let's talk about saving the world for a second. Congratulations on the Iran deal. Congratulations, congratulations, I assume, I don't know. Some people say, you know, you saved us. Some people say you've killed us. Which do you think it is? I assume you think it's a good thing. Tell me why, if I'm someone who thinks that you capitulated like Neville chamberlain, why that's wrong.

SECRETARY JOHN KERRY: Well, for the simple reason that Neville Chamberlain relied on words. There was no agreement. He simply listened to what Hitler said. 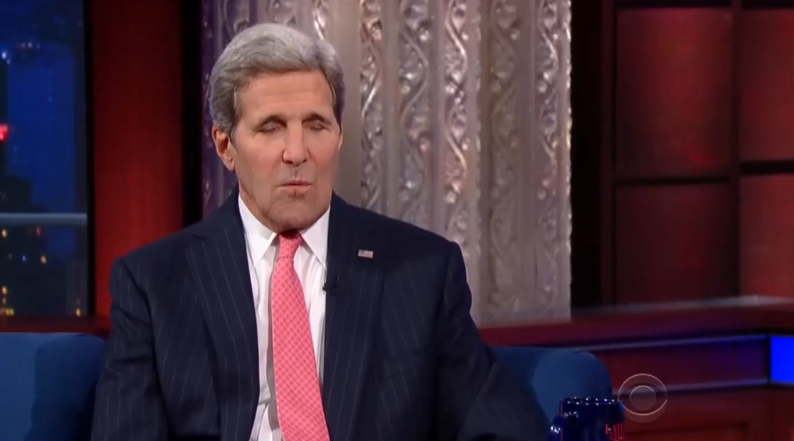 COLBERT: He held up a piece of paper and said I have bring us peace in our time.

KERRY: Yeah, but there was no verification. Nothing certain. We have 159 pages that we negotiated over two and a half years that lays out, Stephen, every single requirement that the Iranians have to perform. They don't get any relief from the sanctions until they have knocked their stockpile of enriched Fusile material down, until they have destroyed many of their centrifuges, until they've stopped fissionable material, I mean there are a series of things they have to do before they get any help. So then we have the verification system with 24/7, 365 watching what they're doing. Knowing exactly where the program is going. And that goes on for 15, 20, there are different grades of what's required, 25 years, we track every single bit of uranium that is produced in their mines and goes all the way through the entire nuclear fuel cycle. And for lifetime, forever, they have to submit to this thing called the additional protocol which requires inspections.

COLBERT: That forever is a long time.

KERRY: I would like to negotiate with Taylor swift. That would be interesting.

COLBERT: That would be very pleasant. You can be part of the girl squad. But the Iranian, the Ayatollahs, the Supreme Leaders still call the United States the Great Satan. How can we trust them if they believe we're the ultimate evil. Why wouldn't they lie to us in order just to get what they want because they don't owe us anything because we're evil.

KERRY: Well, they might, Steven -- Stephen, and they do call us the Great Satan, but this deal wasn't intended to solve all of our problems with Iran. President Obama made a fundamental decision. Iran cannot get a nuclear weapon. Why? Because in Iran with a nuclear weapon, is obviously a lot harder to deal with an than an Iran without one. And because we don't want nuclear weapons spreading throughout the region or anywhere, for that matter. So the first objective was to deal with the nuclear weapon. And we had a very targeted disciplined effort here where we did not get sidetracked. As some people think we should have. And there is some criticism of us for that.

COLBERT: Did you ever attempt to walk away, you, the president and administration telled to walk away.

COLBERT: What was the most crucial moment for you?

KERRY: There were several. There were a number. In fact, a week out there was a moment in the evening when we really thought this wasn't going to happen. And I sat down with my fellow foreign ministers from Germany, France, China, Britain, Russia, and we talked about how do we deal with this possibility that it may not happen, and therefore where will things go in the Middle East as a result of that. Then the next day, I had a personal conversation with my counterpart from Iran. And we really kind of talked about the stakes for the world, for the region, for all of us. And I said look, if you are's not serious, we're ready to go home. You make up your mind. And they came back and somehow we managed to get back on track and obviously about a week later we closed the agreement.

COLBERT: You related your experience in Vietnam to your determination to get this deal. What is the connection between the two of those?

KERRY: War. I mean if we didn't get an agreement with Iran, the pressures that would have mounted because Iran would have been pursuing its program,.

COLBERT: So it was war or the deal?

KERRY: Well, our perception was-- it wouldn't be war day one or immediately. But if Iran continued to enrich and Israel and other countries in the region saw them doing that, then the pressure was going to mount inexorably to have to do something about it. And if you tried negotiation and have failed or you can't negotiate, you then wind up being pressured towards the conflict. And you know what I learned in Vietnam was pretty simple. That it was a war in which too many of my friends died and died, I believed, under circumstances that might have been averted had different choices been made by people in positions of responsibility. And I vowed that if I was ever one of those people in a position of responsibility, I would do everything in my power to make sure that young men and women in American were never sent to war unless it was a last resort.

COLBERT: We're going to take a little break. You can stick around. I would like to have more because it turns out there are other things in the Middle East as well that are worth talking about.