For starters, under no circumstance should it be acceptable for somebody to interview their former boss on a major news network. This was a terribly biased interview, but it actually displayed a complete portrait as to how corrupt MSNBC is. Maxwell could never give a fair interview with Clinton, and if a conservative host had an interview with their Republican boss, the leftist media would be all over it. Imagine if Fox News sought out Sean Spicer to interview Donald Trump.

Maxwell began the interview by praising Clinton, and giving her the opportunity to ramble about her favorite topic, Russia:

Thank you so much. You always told me to speak my truth, and so I'm trying to do that every day. I want to start with Russian interference. Because we know so much more than we did when we were experiencing that interference in 2016.

Over the past few years, leftists have begun to only care about their truth, rather than the actual truth. This type of thinking is dangerous, and absolutely absurd that it was promoted on a major news network. Bringing up Russia gave Hillary the chance to attack President Trump. Unsurprisingly, Maxwell never gave Clinton an opportunity to address the fact that China and Iran are rooting for a Biden presidency.

When asking Clinton about her 2016 vice presidential pick, Maxwell made it clear that she would make it as easy as possible for her to answer:

But I think that you’re the best person to ask, what went into your selection of Tim Kaine? And I'm not going to ask you, would you do it differently or anything like that. But in terms of what Joe Biden is considering, is there any advice you’d like to give him in terms of, you know, how you made the choice to pick the best person to be your running mate?

First off, it doesn’t seem like a two-time presidential loser would be the best person to ask about what 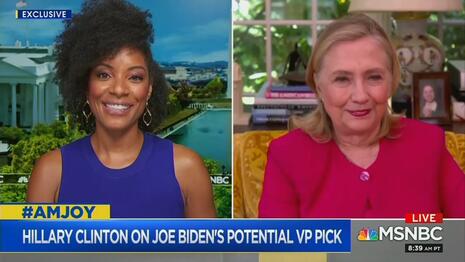 should go into a VP pick. It’s also worth noting that Maxwell explicitly told Clinton that she didn’t have to answer the difficult part of the question. She gave Clinton the airwaves to only express positive things about her campaign, with no room for criticism.

MSNBC should be ashamed of themselves for putting this ridiculously slanted interview on air. This is a prime example as to why the people do not trust the media whatsoever. Whether the leftist media organization would like to admit it or not, to normal people this looks like media corruption. There was no problem with Maxwell guest hosting, the real concern lies with MSNBC’s ethics of letting her interview her former boss.

This distorted interview was sponsored by Audi and Dunkin Donuts. To fight back against MSNBC, follow those links to contact their advertisers.

ZERLINA MAXWELL (MSNBC HOST): Once again, Hillary Clinton tried to warn us. And once again, it looks like foreign countries are seeking to interfere in our elections. A statement Friday from a top U.S. Intelligence official revealed Russia is actively trying to help elect Donald Trump. Just like they did in 2016. The official found both China and Iran want to see Donald Trump's defeat. And they’re looking for ways to make that happen. Joining me now is 2016 Democratic presidential nominee and former Secretary of State Hillary Clinton. I should note, I worked for Hillary Clinton in 2016 on her presidential campaign. Good morning, Secretary.

HILLARY CLINTON (2016 DEMOCRATIC NOMINEE): Good morning Zerlina. And I'm very pleased to be here with you. I'm so proud of you, and I love what you are doing, bringing the news in real time and, you know, real reality to your viewers.

MAXWELL: Thank you so much. You always told me to speak my truth, and so I'm trying to do that every day. I want to start with Russian interference. Because we know so much more than we did when we were experiencing that interference in 2016. It started at the Democratic convention. We’re coming up on another Democratic convention, and we know so much. So what’s your advice to not only the Joe Biden campaign as we head into basically a virtual convention, where the interference is clearly present and also headed into November post-convention, because there are so many things online that nefarious actors have tried to do, and you’re the best person to ask because it happened to your campaign, our campaign.

CLINTON: Well you’re right it did. And we know it had an impact, because it was meant to influence voters and how they felt about the election. And in particular, about my campaign. We didn't know back then what we know now. And when even the Trump administration intelligence officials have to admit that there is so much activity coming from Russia that is designed to help Trump, then you know there's so much more than they are telling us. In fact, several senators who have been briefed on the classified side have said, oh it's so much worse than what is even being publically portrayed. So I think there's a couple of things. Number one, I hope the press doesn't fall for it. I hope the press is vigilant and incredibly skeptical about what's happening online. I hope the press covers the vulnerabilities of our election systems to interference, something that we now know more about than we did right after 2016. I hope that even Republicans will find their patriotism, their conscience, try to force some of the classified information into the public arena, so that people have a better idea about what's going on. And, of course, the Biden campaign and all of the allies it has have to be as vigorous as possible in refuting and rebutting all of the disinformation and flat out lies that we can expect the Russians to be part of ramping up.

MAXWELL: Absolutely. I want to turn now to COVID-19, because it seems to me the existential dread that so many folks felt when Donald Trump was elected, it's all coming home to roost now, because we are sitting in quarantine. And we are thinking about, you know, when we can go back to normal. And we’re realizing, we may not be able to do that exactly how we were before. But also, that it's taking, it’s going to take a long time for the vaccine to happen and for us to get back to the before times as my co-host Justin Macintosh always likes to say. And I want to ask you what your reaction was to, you know, the country club autocrat coming out with his manila folder announcing that he signed three memorandum. You know, what kind of president-ing is that?

CLINTON: Well it's a stunt. There's no doubt about it. It’s most likely, as even Republican senators have said, unconstitutional, bypassing the Congress, trying to spend money that he has no authority to direct. But it's also meant to be a big diversion from the hard work the Congress should be engaged in to provide the kind of relief that tens of millions of Americans need. We are still in the midst of this pandemic. Sadly, we didn't take the steps for long enough to try to bend the curve, except in a few places around the country. So we're still coping with it. And we can't act like it is back to normal. People are still unemployed in great numbers. Small businesses have been shuttered, are gasping for help. So the Congress needs to act. But I think there was something else very significant in what Trump did the other day. Basically, he signaled that he is going after social security and Medicare. I don't know if he understood that. You never know what he knows and doesn't know about how the government operates. But basically, he was talking about ending the financial contributions we all make into social security and Medicare through the payroll tax. So, yes, it was a stunt. Most likely unconstitutional. He doesn't really have the authority to do what he tried. But he sent a signal to voters that, you know, if you were unfortunately unlucky enough to have him be president again, you can watch what he is going to do to social security and Medicare. And it's going to hurt not just elderly Americans but every American.

MAXWELL: Certainly the generations that are coming up and will need it in a few years. I want to talk about Joe Biden and his choice to pick a vice president. He said he wants to pick a woman. He is considering a short list of women like Kamala Harris and Susan Rice and Gretchen Whitmer, so many others. You’re the last person who had to pick a vice president. And I think, you know, people have their opinions. A lot of opinions about that. But I think that you’re the best person to ask, what went into your selection of Tim Kaine? And I'm not going to ask you, would you do it differently or anything like that. But in terms of what Joe Biden is considering, is there any advice you’d like to give him in terms of, you know, how you made the choice to pick the best person to be your running mate?

CLINTON: It's a great question Zerlina, because I went at it from three different perspectives. Number one, is this a person who could be president literally tomorrow? Secondly, is this a person that I could work with, that I would want to work with day in and day out, in good times and hard times, inside the White House to serve our country? And third, can this person help me win? And with Tim Kaine, I answered all three of those questions affirmatively. He was, you know, more than ready as a former governor and senator to be president. I thought he was one of the most collegial members of the Senate, someone that would be a real delight to work with. And also, he had been part of turning Virginia bluer and bluer. So he had a lot of experience in the political arena. Now, I think for former Vice President Biden, he has to answer the same three questions, but of course, it's a different time. There are different considerations at work. I think he has very good choices. I'm excited about whoever it I that he picks based on, you know, the people that have been made public in terms of his interest in them and their being vetted and even meeting with him, becasue he has to have somebody that would be ready to be our president, somebody that he wants to work with and somebody who can help him win. And I think there are a number of people on that list who could do all three.