CBS, NBC Fawn Over Chelsea Clinton 'Already Making Her Own Mark On History' 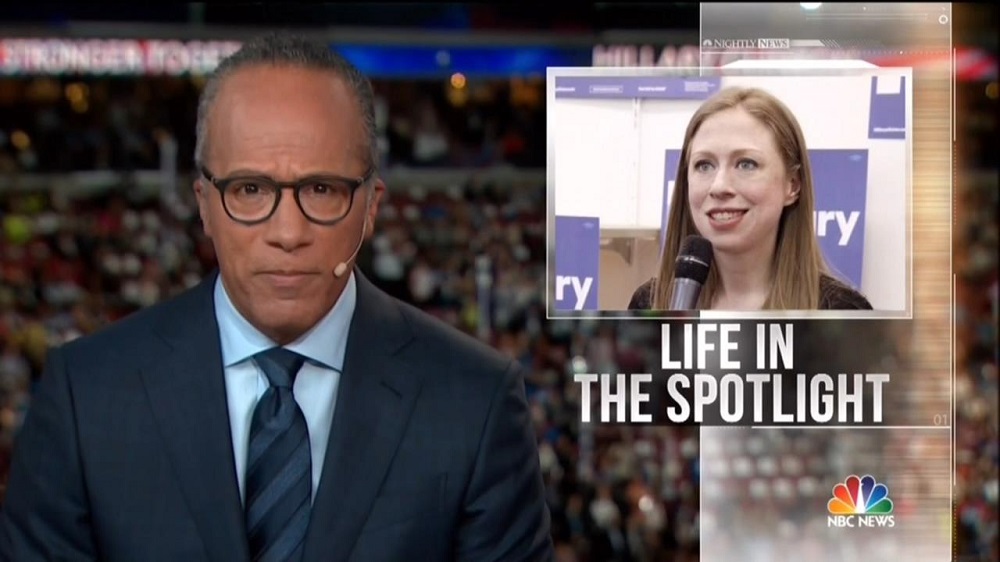 CBS and NBC's evening newscasts on Thursday hyped Chelsea Clinton's planned speech introducing her mother, Hillary Clinton, at the Democratic National Convention. CBS's Vinitia Nair played up that Clinton "uses her mother's smarts and her father's flare." After labeling the younger Clinton "one of the campaign's most valuable assets," Nair trumpeted that "the girl named after a Joni Mitchell song, 'Chelsea Morning,' will finally have her night." NBC's Kristen Welker also touted the presidential daughter's "strong presence on the trail," and later claimed that Clinton is "already making her own mark on history." [video below]

On CBS Evening News, anchor Scott Pelley introduced Nair's report by underlining that "the little girl so many of us remember from her White House years is all grown up." The correspondent led the segment with her "mother's smarts and her father's flare" line, and quickly followed with her "most valuable" label. She continued with a retrospective at the former first daughter's time in the White House — including her apparent role in "keeping that family together" during the Monica Lewinsky scandal, according The Daily Beast's Lloyd Grove.

Later in her report, Nair emphasized that "since then, Chelsea has come into her own....And tonight, the mother of two will proudly introduce her mother at the convention." She ended with her reference to the musical source of Clinton's first name.

Anchor Lester Holt led into Welker's segment on NBC Nightly News by noting that Clinton was "hoping to reveal a side of her mother that the country might not know." The correspondent predicted that "during tonight's speech, Chelsea will leave the policy behind and get personal." Like Nair, Welker zeroed in on the younger Clinton's role in the Lewinsky controversy, and claimed that "Chelsea became a political force of her own — walking hand in hand and humanizing one of their [the Clinton family's] toughest moments."

The NBC journalist later underlined that "Chelsea's challenge tonight [is] softening the image of her mother, who is struggling with historically-low favorability ratings." She concluded by pointing out that "Chelsea now becomes the first person ever to have both parents nominated for president — already making her own mark on history."

On ABC World News Tonight, correspondent Linsey Davis gave the least gushing report on Chelsea Clinton among the Big Three evening newscasts. She zeroed in on Clinton's relationship with Ivanka Trump: "Just last week, we saw Ivanka Trump introduce her dad — a task Chelsea Clinton will take on tonight, just as she did eight years ago after her mom's bruising loss." Davis also followed Welker's example in highlighting that "the former first daughter finds herself in a much different position — potentially the first person in history to have both parents serve as president."

The full transcript of Vinita Nair's report on CBS Evening News and Kristen Welker's report on NBC Nightly News, both from July 28, 2016:

SCOTT PELLEY: Hillary Clinton will be introduced here tonight by her daughter, Chelsea. The little girl so many of us remember from her White House years is all grown up.

CHELSEA CLINTON (from Hillary Clinton campaign event): Now, this is the most important election of my lifetime.

VINITA NAIR (voice-over): On the trail, she uses her mother's smarts—

CLINTON: This is another area where the Supreme Court really matters.

NAIR: And her father's flare.

UNIDENTIFIED MAN 1: Thank you so much!

NAIR: At 36, Chelsea Clinton is one of the campaign's most valuable assets. After all, she's been on the trail with her parents since she was two. In 1991, when Bill Clinton launched his presidential campaign, a then-eleven-year-old Chelsea could barely be seen. It would stay that way for most of her eight years in the White House. While her parents tried to shield her from the press's lens, they were less successful against comedic tongs. Her looks were spoofed on 'Saturday Night Live.' Attending Stanford University in California brought Chelsea temporary reprieve from the limelight until her sophomore year — during the height of the Monica Lewinsky scandal.

LLOYD GROVE: Chelsea, really, was the only thing that was keeping that family together at that point.

GROVE: The Clintons took their cue from their friend Jacqueline Kennedy, who actually sat down with Hillary and — and told her — you know, gave her her insight into how she raised Caroline and — and John in the White House.

NAIR: Since then, Chelsea has come into her own. She's taken a more public role at the Clinton Global Initiative.

CLINTON: I always learn something every time I listen to my parents.

NAIR: And tonight, the mother of two will proudly introduce her mother at the convention.

NAIR (on-camera): What do you think she'll do tonight?

GROVE: It's Chelsea's job tonight to show the human side of her mother. (audio clip of Joni Mitchell's song "Chelsea Morning")

LESTER HOLT: Also part of the full-court press tonight is former — and, perhaps, future — first daughter, Chelsea Clinton — who has grown up, quite literally, before our eyes. Now a mother herself, hoping to reveal a side of her mother that the country might not know.

KRISTEN WELKER (voice-over): The world has watched her grow up, from a pre-teen at the White House, to becoming a parent of her own.

CHELSEA CLINTON (from Hillary Clinton campaign event): I will now vote as a mom.

WELKER: And tonight, Chelsea Clinton will step into an even brighter spotlight — introducing the most important woman in her life, her mom — telling Matt Lauer—

CLINTON (from interview on NBC's Today): I'm going to try really hard to not cry. I think my heart will burst. This election is so important to me, because I'm now a mom.

WELKER: Clinton has been a strong presence on the trail. But during tonight's speech, Chelsea will leave the policy behind and get personal.

CLINTON: I just hope that people understand even a little more when I'm done than when I started about why I love her so much and admire her so much.

WELKER: The 36-year-old, who now helps run the Clinton family's foundation, was born into the world of politics. As a child, the public only caught a few glimpses of her, like during the 1992 Democratic National Convention. But in 1998, with her parents mired in the Lewinsky scandal, Chelsea became a political force of her own — walking hand in hand and humanizing one of their toughest moments.

CLINTON (from Hillary Clinton campaign event): Proud to be my mother's daughter—

WELKER: Chelsea's challenge tonight: softening the image of her mother, who is struggling with historically-low favorability ratings.

LISA CAPUTO, FORMER PRESS SECRETARY TO HILLARY CLINTON: Chelsea's going to beam with pride about the accomplishments of her mother and the historic nature of tonight's speech.

WELKER: And the bar is high. Her friend, Ivanka Trump, drew rave reviews after introducing her dad last week.

IVANKA TRUMP (from speech at 2016 Republican National Convention): You will never again have to worry about being let down.

WELKER: The bitter battle between their parents has clearly taken a toll.

CLINTON: I don't expect her to always have to defend her father. And my mother's not engaging in divisive, bigoted rhetoric.

WELKER: Chelsea now becomes the first person ever to have both parents nominated for president — already making her own mark on history. Kristen Welker, NBC News, Philadelphia.