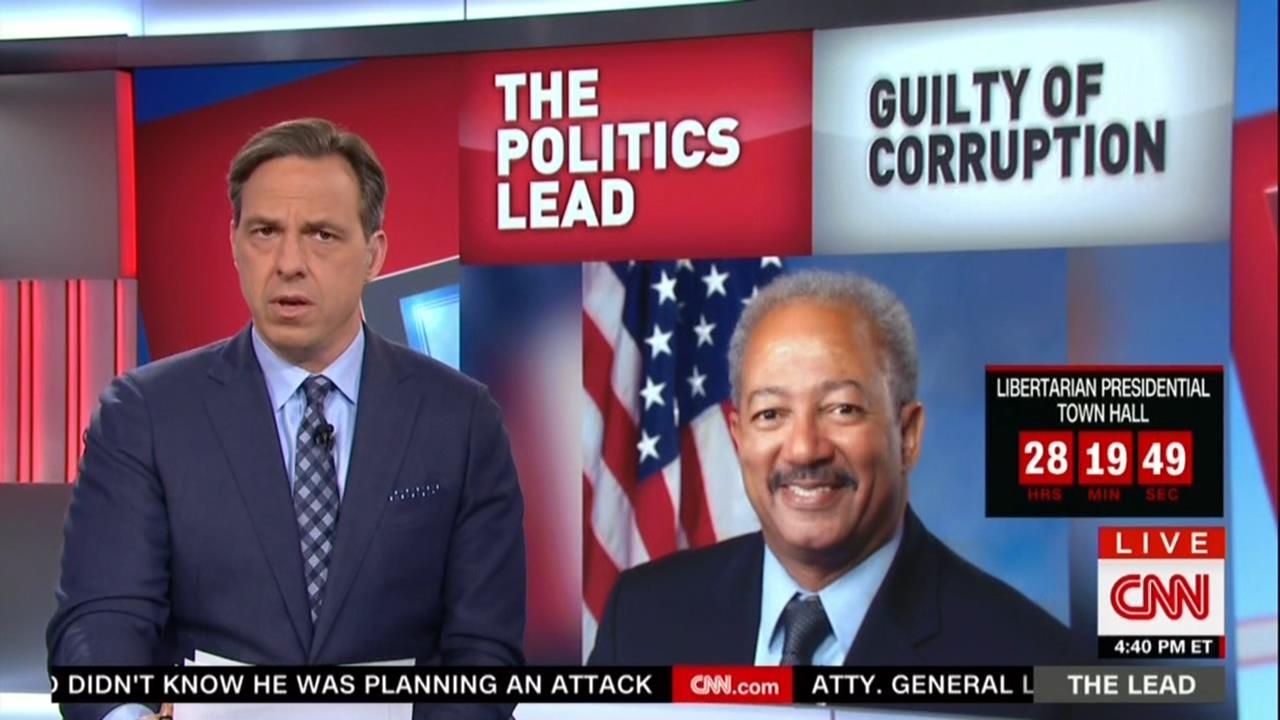 On Tuesday, CNN and MSNBC minimized their coverage of a Pennsylvania jury convicting Democratic Congressman Chaka Fattah on 23 federal charges related to a scheme to repay campaign debt from an aborted 2007 bid to become mayor of Philadelphia. Jake Tapper stood out as the only CNN anchor, as of noon on Wednesday, to mention that Fattah was "found guilty on all 23 charges he faced — including racketeering, money laundering, and fraud" during a brief on his program, The Lead. Steve Kornacki also gave a news brief on MSNBC Live. [video below]

JAKE TAPPER: More in our 'Politics Lead' — some breaking news: Pennsylvania Congressman Chaka Fattah, a Democrat, was convicted in a federal court today. The 59-year-old, who represents West Philadelphia, was found guilty on all 23 charges he faced — including racketeering, money laundering, and fraud. Prosecutors say Fattah stole money from federal grants and non-profit funds to pay off debt from his failed mayoral campaign in Philly back in 2007. He has been in office — the Democrat — since 1995, and he was already losing his House seat, after being defeated in a Democratic primary back in April.

The charges stemmed from schemes to repay an illegal $1 million loan to Fattah's failed 2007 Philadelphia mayoral campaign, with the Justice Department arguing that Fattah used federal grants and nonprofit funds, routed through campaign consultants to repay the loan....

Fattah issued a statement Tuesday afternoon touting his work on education and home foreclosures, saying he's "proud of that record."...A spokesperson declined comment beyond the statement when asked if the congressman plans on stepping down.

Fattah's political career was already coming to an end: He'd been defeated by state Rep. Dwight Evans in a late-April Democratic primary after drastically outspending Fattah, whose campaign funds were siphoned away by mounting legal fees.

During his 32-second news brief, Kornacki pointed out the potential amount of time the Democrat faces in prison:

STEVE KORNACKI: Some news to tell you this afternoon out of politics: longtime Democratic Congressman Chaka Fattah from Pennsylvania convicted today on federal corruption charges. The 59-year-old congressman had been charged with bribery, racketeering, and money laundering, among other charges, in a multi-year criminal scheme. Fattah scheduled to be sentenced on October 4. He could face 20 years in prison on bribery charges alone. All of this stems from what feds say was a scheme to repay debts from his 2007 mayoral bid in Philadelphia.

MSNBC hasn't aired any coverage of Rep. Fattah's conviction since Kornacki's news brief, which aired just before the top of the 5 pm Eastern hour on Tuesday.

Media Research Center alumnus Joe Schoffstall, in a Tuesday article for Washington Free Beacon, provided an additional detail that neither Tapper nor Kornacki mentioned — Chaka Fattah is a superdelegate to the Democratic National Convention for presidential candidate Hillary Clinton.