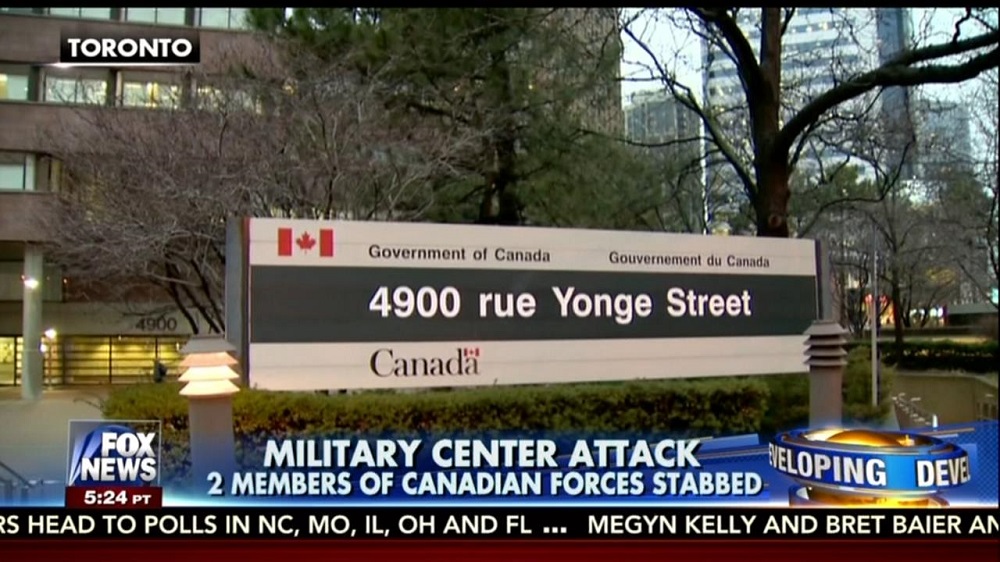 As of Tuesday morning, ABC, CBS, and NBC's morning and evening newscasts have yet to cover the Monday afternoon stabbings at a Canadian military recruitment center in Toronto. During the attack, the suspect, Ayanle Hassan Ali, shouted, "Allah told me to do this, Allah told me to come here and kill people." According to an AP report on Tuesday, Ali first targeted a "uniformed Canadian Forces member at the front desk before slashing him on the right upper arm. He said the suspect then attempted to slash a female member of the Forces before he was subdued."

CBS's early morning newscast, CBS Morning News, actually covered the possible terror attack. However, the network omitted the story from their morning show, CBS This Morning, which began three hours later. Anchor Anne-Marie Green gave a 22-second news brief six minutes into the 4 am Eastern hour, but she left out the actual statement from the suspect:

ANNE-MARIE GREEN: And police in Toronto are trying to determine if a stabbing at a military recruitment center might be terror related. A man walked into the center yesterday afternoon and attacked an armed forces member. Others rushed to his aid, but a second military member was stabbed. The injuries are not life threatening. The suspect made statements that led police to look into a possible terror connection.

BRIAN KILMEADE: A double stabbing at a Canadian military center is now being investigated as a possible terror attack. Reports say the suspect said, 'Allah,' while attacking two uniformed Canadian force members yesterday. The suspect was arrested, and is now undergoing a mental evaluation.

STEVE DOOCY: And a double stabbing at a Canadian military center is being investigated as a possible terror attack. Witnesses say the suspect shouted, 'Allah,' while attacking two uniformed Canadian force members in Toronto. The suspect was arrested, and is now undergoing a mental evaluation.

The AP's Rob Gillies pointed out in his Tuesday report that this wasn't the first time that members of the Canadian military have been attacked inside their own country by Islamists:

In 2014, a man authorities described as an "ISIL-inspired terrorist" ran over two soldiers in a parking lot in Quebec, killing one and injuring the other before being shot to death by police. The man had been under surveillance by Canadian authorities, who feared he had jihadist ambitions and seized his passport when he tried to travel to Turkey.

Two days later, a gunman killed a Canadian soldier at the war memorial in Ottawa and then stormed Parliament before being shot dead. The man had taken issue with Canada's involvement in the war in Afghanistan and the fight against the Islamic State group.