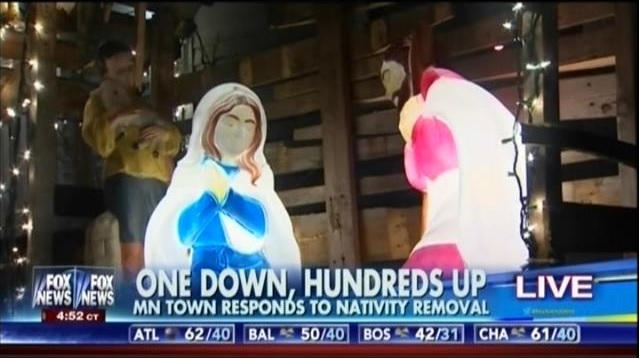 Fox News Channel's Kelly Wright detailed on Wednesday's Fox & Friends First how Christians in Wadena, Minnesota launched a silent rebellion, after the nativity scene in their town's square was taken down due to the threat of a lawsuit from the atheist Freedom From Religion Foundation. Hundreds of Wadena residents set up nativity scenes outside their own homes once the Christmas creche was removed.

Anchor Heather Nauert teased Wright's report by noting that "the latest battle in the war on Christmas ends in a way that no one expected. Let's just say the atheist who waged it in one Minnesota town certainly won't try this one again." Co-anchor Heather Childers led into the segment by touting the "the town's reaction to the out-of-control political correctness."

The correspondent quoted from the Christmas carol, "Away in a Manger," as he pointed out that "the manger, or nativity scene, symbolizes his birth — even in Wadena, Minnesota. But some complained the nativity in the center of town violated separation of church and state. The Freedom From Religion Foundation Wisconsin threatened to sue, so the town reluctantly took it down." He also included three soundbites from one of the organizers of the pro-nativity protest, Dani Sworski.

HEATHER NAUERT: An unbelievable response to tell you about when a Minnesota town removes its nativity scene, after an atheist organization complained about it.

HEATHER CHILDERS: Hundreds of residents are now putting up their own nativities.

And Kelly Wright is here with the town's reaction to the out-of-control political correctness. Good morning, Kelly.

KELLY WRIGHT: 'Out of control' — it might be, actually, in control. There are more than two billion Christians in the world who celebrate Christmas as one of the most sacred seasons of the year, because it celebrates the birth of Jesus Christ. And while some around the world are persecuted by ISIS these days — well, Christians in Minnesota are saying they're not going to let some Scrooge ruin their Christmas by taking it away a public symbol of Jesus' birth.

'Away in a manger, no crib for a bed, the little lord Jesus lay down his sweet head.' It's a Christmas carol that describes the biblical story of the birth of Christ; and the manger, or nativity scene, symbolizes his birth — even in Wadena, Minnesota. But some complained the nativity in the center of town violated separation of church and state. The Freedom From Religion Foundation Wisconsin threatened to sue, so the town reluctantly took it down.

DANI SWORSKI, NATIVITY SCENE OWNER: I feel like they're just trying to — to bully our faith away.

UNIDENTIFIED MAN 1: There was a threat that the nativity not even being able to get up this year.

WRIGHT: But some of the town folk said Jesus is the reason for the season, so they put up their own displays — hundreds of nativity scenes now everywhere throughout Wadena.

Dani Sworski's family made their own nativity years ago — not because of religion, but because of their faith.

SWORSKI: I've pictures up and down our Facebook wall.

UNIDENTIFIED MAN 2: The nativity — you know, it's emblematic of a — of a moment in history that — that we think changed the world.

WRIGHT: So, in the end, the people of Wadena can sing 'Joy to the World.' Back to you.