CNN's 'Man on the Street' Finds Many Only Know Hillary, Bernie; Stumped On Remaining Three Dems 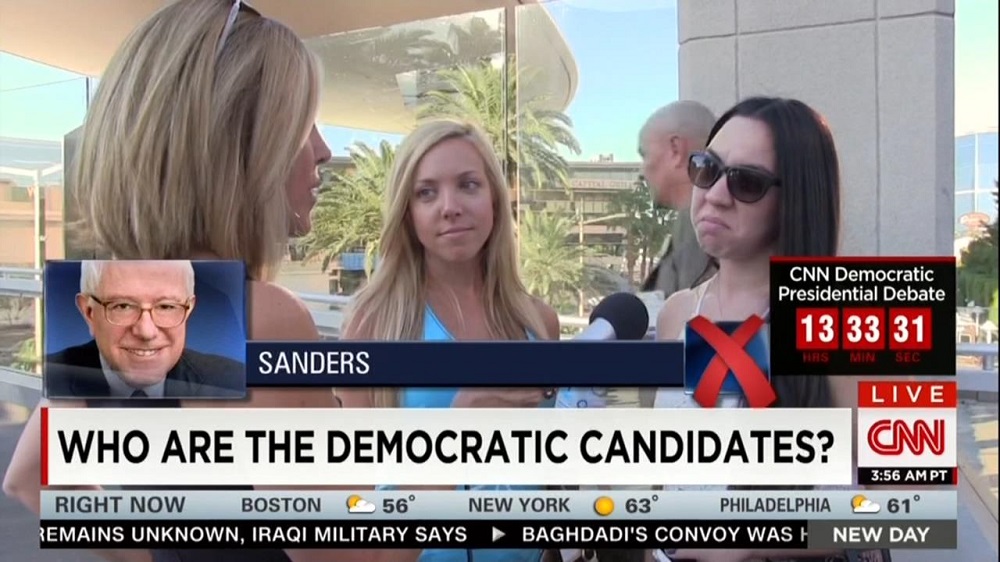 On Tuesday's New Day, CNN's Alisyn Camerota interviewed everyday people on Las Vegas's Strip, and revealed that most people have heard of Hillary Clinton and Bernie Sanders among the Democratic presidential candidates, while hardly any could name the remaining three. Out of seven people featured during the segment, only one could name Martin O'Malley and Jim Webb. None knew former Rhode Island Governor Lincoln Chafee. [video below]

One young woman thought Joe Biden was definitely running (even though he hasn't announced yet), and couldn't identify O'Malley when his picture was held up in front of her. Her companion joked, "Were they at the party last night?"

At the end of the segment, Camerota stated, "I believe it points out that...some of the candidates have their work cut out for them...in terms of introducing themselves to voters." One wonders if CNN and the media in general bear some responsibility, as they have long gushed over Mrs. Clinton (and, in more recent months, Sanders), but don't often mention O'Malley, Webb, or Chafee.

The transcript of the Alisyn Camerota report from the October 13, 2015 edition of CNN's New Day:

ALISYN CAMEROTA: We got in yesterday afternoon, and we immediately hit the Strip [in Las Vegas] to talk to real voters about what they're hoping comes out of tonight's debate; and more importantly, do they know who will be in tonight's debate? Take a look.

CAMEROTA (from pre-recorded segment): Do you know any of the other candidates who will be at the debate?

UNIDENTIFIED MAN 1: For the Democrats?

UNIDENTIFIED MAN 1: There are more than Hillary – Bernie? That's about it.

CAMEROTA: That are going to be-

UNIDENTIFIED MAN 1: And – let's see here. What's that other guy – Webb, I believe.

Have you ever heard of Hillary Clinton?

CAMEROTA: Do you know who's in the debate?

UNIDENTIFIED WOMAN 1: Bernie Sanders, Hillary Clinton. Who's the other person?

CAMEROTA: Who are you looking for?

CAMEROTA: Do you know who else is going to be in the debate?

UNIDENTIFIED WOMAN 3: Isn't it going to be Hillary? And – I don't know if Trump is going to be there, because I try not to pay attention to him, but-

CAMEROTA: There are three other guys running for president on the Democratic side.

CAMEROTA: Do you know who will be in the debate?

CAMEROTA: Not yet – deciding.

CAMEROTA: You heard it here first.

CAMEROTA: All right. You seem to be in the know. That's cool. Okay. So Hillary, possibly Joe Biden – anybody else you can name?

CAMEROTA: Have you ever heard of Bernie Sanders?

UNIDENTIFIED WOMAN 5: Were they at the party last night?

CAMEROTA: I don't know. Maybe, they were-

CAMEROTA: Do you recognize this handsome man?

UNIDENTIFIED WOMAN 5: No. No. Definitely did not take shots with him.

UNIDENTIFIED WOMAN 4: No, we did not. No.

CAMEROTA (live): Okay.  So, I believe it points out that they – some of the candidates have their work cut out for them, Michaela [Pereira], in terms of introducing themselves to voters.